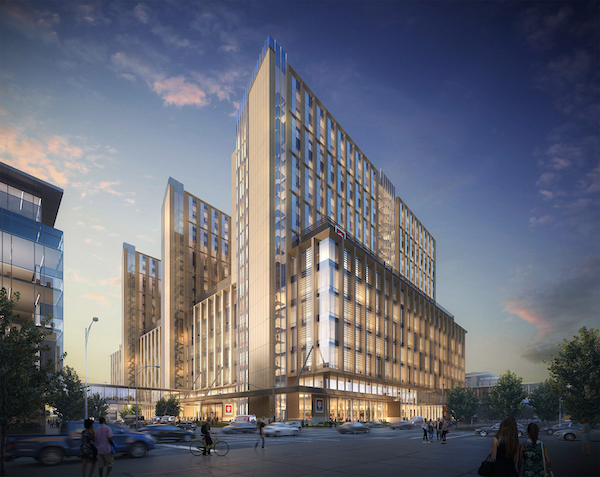 Indiana University Health said Monday the cost of its new downtown hospital complex will now top $4 billion, an increase of 60% over previous estimates, due to higher construction costs and a major increase in the number of patient rooms.

The new estimated price tag of $4.29 billion would place it among the most expensive capital projects in recent Indiana history, in the same league as the BP refinery expansion in northwest Indiana and Duke Energy Corp.’s new Edwardsport power station in southwest Indiana.

The health system said it plans to increase the number of private patient rooms in the new hospital by 29%, to 864 from a previously planned 672. The three patient towers will be 16 stories, the upper range of the city-approved plan design.

“IU Health’s board believes the larger capacity is needed to meet forecasted inpatient demand, including for a growing caseload of sicker patients,” the Indianapolis-based health system said in a written statement. “The COVID-19 pandemic also has shown how deeply the state relies on IU Health, as Indiana’s largest hospital system, to supply the acute-care capacity to respond to large-scale medical emergencies.”

IU Health’s announcement ends months of speculation about the downtown hospital project, ever since the health system disclosed last summer it was reevaulating the scope, cost and timing of the medical campus, a project in the works for seven years.

The new hospital complex, under construction for more than a year, will sit on a 44-acre footprint just south of the health system’s century-old Methodist Hospital near Capitol Avenue and 16th Street.

The planned opening of the hospital has been moved to the fourth quarter of 2027, roughly a year after the previously announced opening date of December 2026.

“The new date reflects the longer timetable needed to construct the larger building in the midst of a skilled labor shortage,” IU Health’s statement said.

The new hospital will consolidate much of the existing Methodist Hospital and University Hospital, which is about 1.5 miles southwest on the IUPUI campus. The eight-block expansion will extend IU Health’s footprint from 16th Street south to 12th Street and from Capitol Avenue west to Interstate 65.

The complex will include a utility plant, a medical office building and a support building that will contain parking, loading docks and retail space.

It will also be home to Indiana University School of Medicine’s classrooms, which will move from the IUPUI campus in a separate project costing $230 million.

Just last year, IU Health estimated the cost of the project would be $2.68 billion, consisting of $1.6 billion for the new hospital and $1.08 billion for support buildings and infrastructure.

The new price tag reflects higher costs for construction and the scope of the project. IU Health now estimates the cost of the hospital at $2.31 billion and the support buildings and infrastructure at $1.98 billion.

The new cost estimate does not include the cost of demolishing or renovating part of Methodist Hospital. The hospital is a hodgepodge of buildings and wings that have been stitched together over the decades, with mismatched floor plates, uneven ceilings and a conglomeration of electrical, mechanical and plumbing systems.

The total cost of the new hospital complex, which has yet to be named, tops several other recent large capital projects in Indiana. BP’s expansion of its refinery in northwest Indiana cost about $4.2 billion. Duke Energy’s massive power plant in Edwardsport cost more than $3.3 billion.

IU Health said that despite the higher price tag, the new hospital will save $50 million a year in operating costs by consolidating two large acute-care hospitals, eliminating duplication of many services.

The architect for the hospital is Indianapolis-based Curis Design, a collaboration of BSA LifeStructures, RATIO Design and CSO Architects. HOK serves as the executive architect.

The construction manager is a joint venture of locally based Wilhelm Construction and Gilbane Building Co. of Providence, Rhode Island.