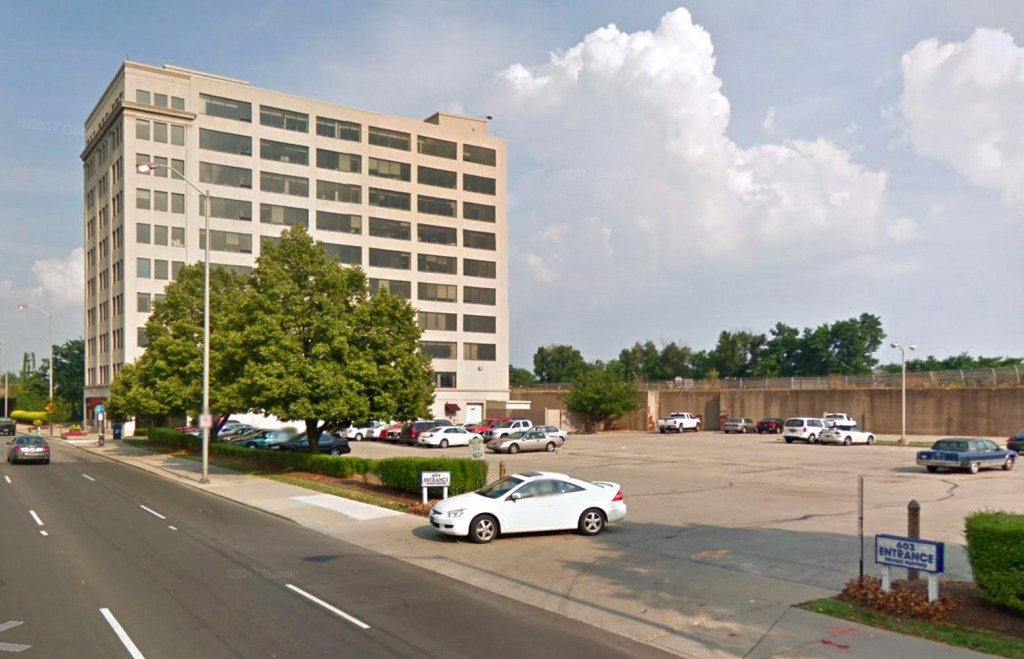 The 10-story, 66,220-square-foot building and its 216-space parking lot are adjacent to the site of the Indianapolis Downtown Heliport, which is slated for eventual redevelopment. (Photo courtesy of Google)

A prominent office building and its 2.45-acre lot in the southeast quadrant of downtown Indianapolis is on the selling block, with the potential for redevelopment into apartments or mixed-use projects.

The 10-story structure at 603 E. Washington St. was listed last week without an asking price by the Indianapolis office of Toronto-based commercial brokerage Colliers International. The near-vacant structure, built in 1932, has long been owned by Indianapolis social services firm Adult & Child Health.

The lot consists of the 66,220-square-foot building and a 216-space parking lot at the southeast corner of Washington and East Streets. The property is bordered to the south by the Indianapolis Downtown Heliport landing pad and to the east by CSX railroad tracks. The property resides in a qualified opportunity zone, potentially making it more attractive for real estate investors.

Andrew Urban, vice president of commercial services for Colliers, said the listing has timing considerations tied to the heliport site, which itself is slated for eventual redevelopment through a partnership between the city of Indianapolis and the Indianapolis Airport Authority, which owns the property.

“There are some questions that need to be fully answered regarding the timeline for the closure of the heliport,” but the 603 E. Washington St. building’s visibility and access help it stand on its own regardless of what happens with the adjacent property, Urban said.

“A resolution there benefits whatever’s developed on this site, but there also could be a play for a developer acquire this site, begin development, and then also have broader ambitions for the heliport site and factor that in to their design,” he said. “There’s a lot of different angles and I think they’re all pretty positive.”

Urban said it’s likely the existing building will be redeveloped rather than torn down, and then incorporated into a larger site plan. In fact, it’s expected the site will be developed into either multifamily uses or a mix of apartments and office or retail space. Such uses wouldn’t require rezoning, as the area is already designated as CBD-2 because of its location in the city’s central business district.

Much of downtown’s southeast quadrant has been in some stage of transformation over the last decade. Several properties within a couple blocks of 603 E. Washington St. have been redeveloped as apartment complexes in that time. City officials are investigating the redevelopment potential of the heliport, City-County Building and the Jail I and Jail II facilities.

The 603 E. Washington St. building has two occupants: DISA Global Solutions Inc., which occupies about 14,300 square feet and Indiana Youth Institute, which has just under 9,000 square feet. The leases for each expire in 2023.

Urban said Adult & Child Health has opted to sell the property because it “no longer fits with their business.”

A call for offers on the property is expected to go out May 23, with final selection sometime after June 15. Urban said the owner hopes to close on a sale of the property by early 2023.

“Given all the development activity nearby, this felt like an opportune time for them to take it to market,” Urban said. “We think it represents the next chapter in the Market District East, and is the future of that area. This represents one of the final pieces on that side of downtown.”