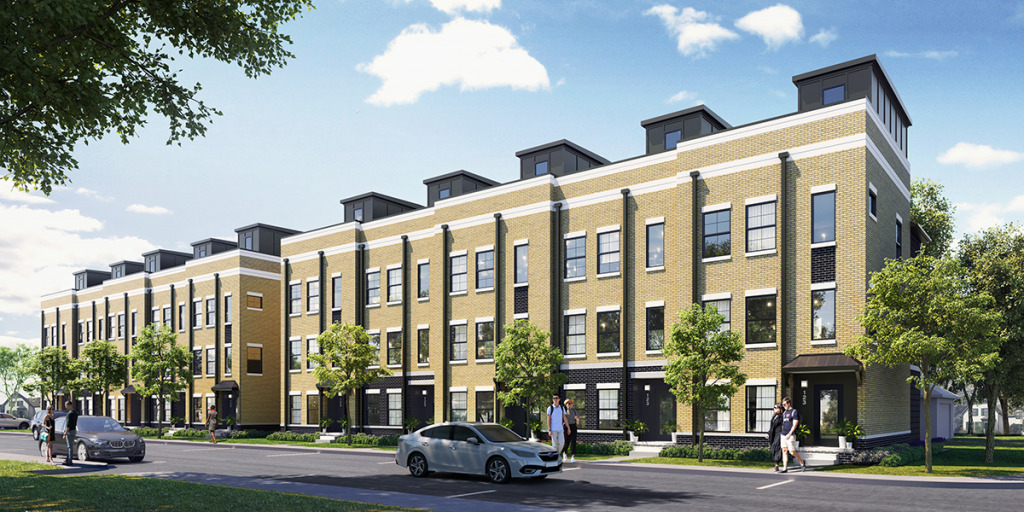 A rendering of FSX, which will consist of 10 townhomes on Prospect Street in the heart of Fountain Square. (Rendering courtesy of Onyx+East)

Indianapolis-based residential developer Onyx+East plans to spend about $3.5 million to wipe a drive-thru bank station from the heart of Fountain Square and build 10 townhouses in its place.

The project, called FSX—shortened from “Fountain Square Ten”—is planned for a nearly 0.3-acre, rectangular site at 1003 Prospect St., which currently houses two drive-thru ATMs for PNC Bank. Onyx+East has the land under contract for an undisclosed price.

FSX will consist of two buildings, each containing five three-story town house units. The units are expected to come in two sizes: Seven will be 1,881 square feet and three will be 1,730 square feet, according to filings with the city’s Department of Metropolitan Development.

Each unit will have its own attached two-car garage, two or three bedrooms and up to three bathrooms. They will all have their own rooftop decks, as well. The units are expected to range from $425,000 to $450,000.

The project will also bring sidewalk patching along St. Patrick Street—the western edge of the property—and Prospect Street, to repair curb cuts made for the ATM. Some new surface parking spaces will be added in place of the curb-cuts.

Onyx+East received approval during the Nov. 17 Metropolitan Development Commission meeting to rezone the land to the D-P, planned development, designation from a C-4 commercial designation. The MDC also approved a variance to allow for an encroachment of clear-sight triangles on portions of the property and the creation of a subdivision plat.

The changes are expected to be up for final approval from the City-County Council in December.

Onyx+East plans to break ground on the project—and begin sales—by the end of this year, pending final approvals.

Rottman Collier Architects is the design firm on the project.

Correction: Due to incorrect information supplied to IBJ, the original version of this story said the cost of the project would be $12.5 million. It has been corrected as $3.5 million. You can see all of our corrections here.