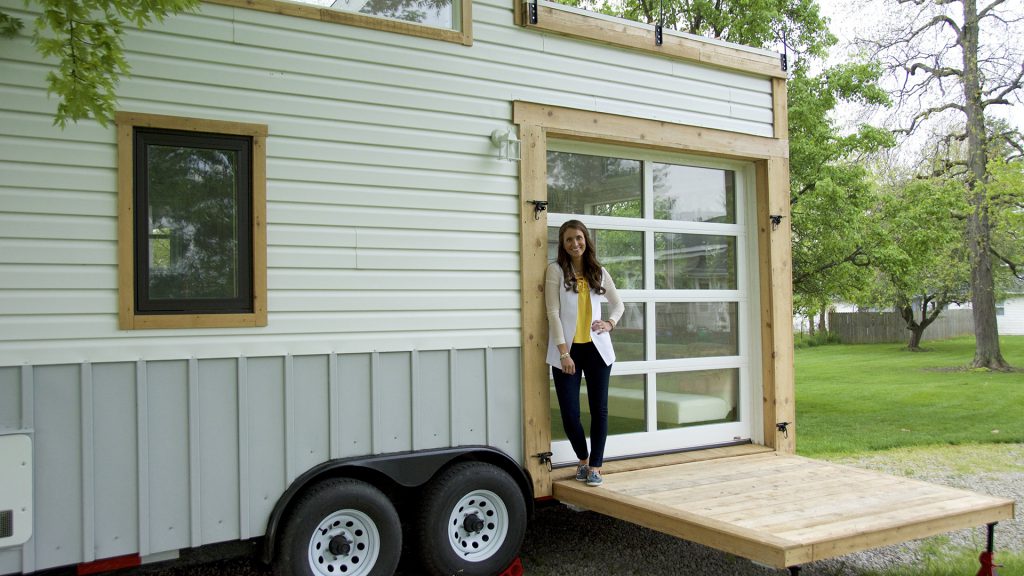 Maggie Daniels at one of her tiny houses. - Photo courtesy of Lisa Price

The owner of Westfield-based specialty lodging service Try It Tiny LLC has filed for personal bankruptcy after taking on hundreds of thousands of dollars in business debt in recent years.

Daniels, a 2019 IBJ Forty Under 40 honoree, launched Try It Tiny in early 2017. The company offered an Airbnb-like platform connecting tiny home enthusiasts with short-term rentals across the country, as well as 20 tiny houses for use at sporting events across the United States, including the Indianapolis 500 and NASCAR races.

Daniels’ filing indicates she has just under $383,000 in assets and about $1.08 million in liabilities, much of which stemmed from the business.

She dissolved Try It Tiny on March 23 with more than $765,000 in outstanding business debt, according to bankruptcy filings. The single-largest unsecured creditor in the filing is $671,700, owed to The National Bank of Indianapolis.

The company’s 20 homes—altogether valued at about $650,000—are pledged to the bank as collateral.

Among its properties was a seasonal enclave of five uniquely-themed houses on a parking lot south of Lucas Oil Stadium, which Try It Tiny began offering for rent in April 2019. Rental rates for the homes began at $70 per night. The project was part of the company’s strategy to grow its offerings and build revenue. The company’s website is no longer active, and a blog makes no mention of business operations ceasing.

Chapter 7 bankruptcy typically liquidates nonexempt property to repay creditors, unlike other forms of bankruptcy that leave opportunities for reorganization and debt consolidation.

Daniels asked to retain her Zionsville home and a leased 2019 Ford F150, rather than forfeiting them to their respective creditors. She also claimed exemptions on a 2018 Jeep Wrangler, a variety of personal property, farm animals, a life insurance policy and an individual retirement account containing more than $71,000.

Daniels owns a an additional piece of Zionsville real estate valued at $222,500 through holding company 800 East LLC. The property—which is in disrepair and is being rented—has a lien of $191,000. It, too, was claimed as exempt, but does not include a specific dollar figure.

Daniels declined to comment when reached by IBJ on Thursday.