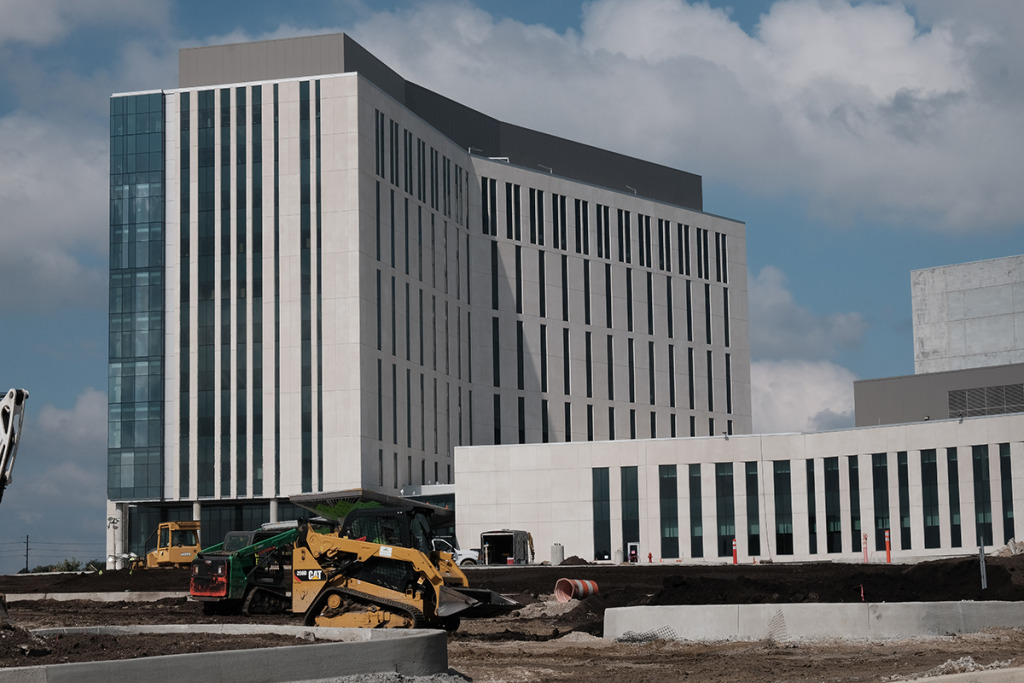 Work continues on the new Community Justice Campus as Marion County courts and the jail prepare for their move. (IBJ photo/Eric Learned)

Supply chain issues are forcing Marion County courts to delay their move to the new Community Justice Campus until mid-February, according to an updated timeline of the relocation process.

The courts were planning to move at the end of 2021 or early 2022. By the end of the summer of 2021, court personnel were being encouraged to start cleaning out their offices in the City-County Building, and training sessions were being planned to start in October to teach the judges and court staff how to use the technology that will be available in the new courtrooms.

However, the moving dates are being recalibrated because of COVID-related delays in getting some systems and equipment, such as cameras, network switches, outdoor lights and other items with computer chips. Additional time is also needed, according to the updated timeline, to adequately test and provide training on those systems and equipment.

Now, the main courthouse is scheduled to begin moving the first week of February 2022 and conclude by the end of that month. Also, some court personnel may be moved before the start of February.

While the courts’ moving plans are being adjusted, the Marion County Sheriff’s Office will be relocating on schedule to the new Community Justice Campus.

The administrative staff will be moving from the jail on South Alabama Street to the new campus next week, according to a sheriff’s office spokesman. Then in early- to mid-January, jail staff and inmates will move into the new facility.

Some administrative functions, like inmate property pickup and sex offender registration, will be staying at the current downtown site until the jail moves.

The construction on the new sheriff’s offices and jail has been completed. Some tweaks remain like installing a few additional desks, but the new space is “substantially completed,” the spokesman said.

“We’re all pretty excited,” the spokesman said. “It’s going to be so much better for people in our custody and our staff.”

In the meantime, the public defender agency will be staying in its current downtown office in what is known as the Gold Building.

Other later phase structures planned for the new justice campus, such as the professional office building, parking garages and other criminal justice buildings, are still expected to be completed throughout 2022 and 2023.