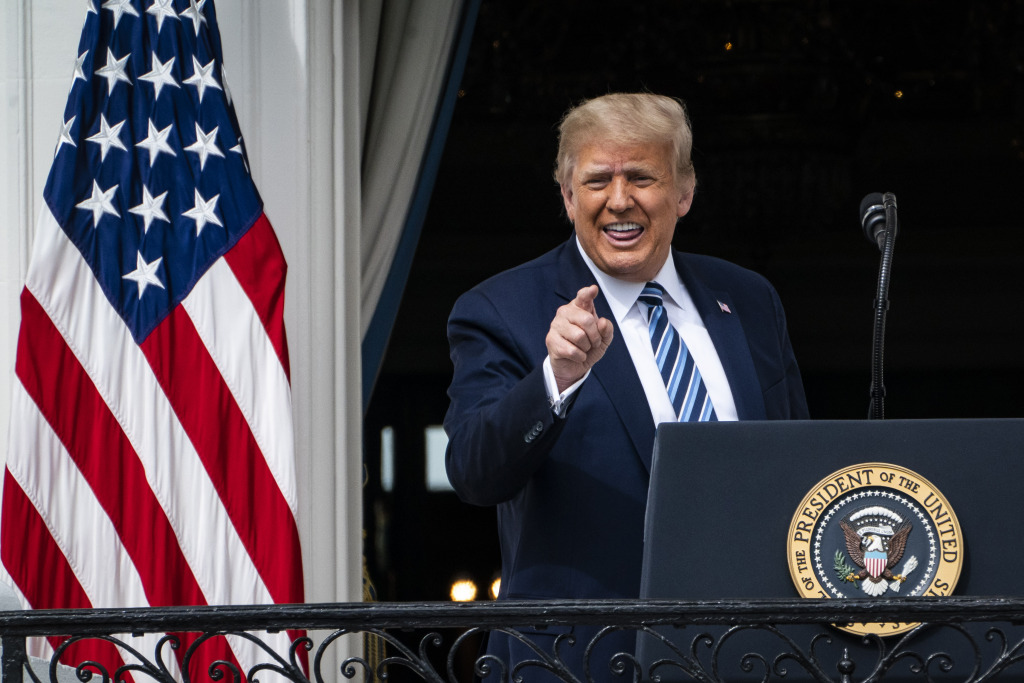 President Donald Trump speaks to supporters from the Blue Room balcony at the White House in October. (The Washington Post photo/Jabin Botsford)

President Donald Trump said Tuesday that the White House would approve a big stimulus package after the election and predicted that Republicans would retake control of the House of Representatives even though the GOP is widely expected to lose seats in the chamber next week.

“After the election, we’ll get the best stimulus package you’ve ever seen,” he said.

Trump’s comments came as the prospects of an economic relief deal appear to be withering after months of talks, a scenario that – combined with rising numbers of coronavirus cases – sent the stock market sharply lower Monday.

Congress left Washington until after the election without passing any new economic or health care relief measures even as the coronavirus pandemic surges and the economy sputters. Prospects for a stimulus deal remain in doubt and negotiations have largely been shelved after repeated failed attempts to broker a compromise.

Earlier Tuesday, Trump blamed House Speaker Nancy Pelosi, D-Calif., for the lack of an agreement, though his Twitter post had a grammatical mistake and it’s unclear what he meant.

“Pelosi only looking to Bail Out badly run Democrat Cities,” he wrote. “Tap, Tap, Taping us along. She has little interest in helping out the ‘people.’”

Talks faltered in part because the bipartisan urgency that the White House and Congress shared earlier this year evaporated over the summer as the November elections neared. Instead, the White House and Democratic leaders dug in during talks and never closed in on an agreement.

After days of bitterly partisan debate and a vote late Monday confirming Amy Coney Barrett to the Supreme Court, senators are headed back home to campaign for re-election. The House has been out of session for weeks, although Pelosi and Treasury Secretary Steven Mnuchin have continued to negotiate around a new $2 trillion relief bill.

Their talks showed scant evidence of progress, but neither Pelosi nor Mnuchin seems to want to be the one to say it’s over. Pelosi continues to insist she wants a deal before the election that would include another round of $1,200 stimulus checks, among other things. But at the same time, her rhetoric has shifted in recent days to emphasize the possibility of a bigger and better relief bill passing in future, with retroactive benefits—a scenario that would seem possible only under a Biden administration.

“The Democratic message to the American people is: ‘Help Is on the Way. It Will Be Safer, Bigger, Better and Retroactive,'” Pelosi wrote in a letter to House Democrats this week.

The inaction by Congress leaves the public without a lifeline, at a moment when covid cases and hospitalizations are on the rise in multiple midwestern states and elsewhere. An unprecedented $3 trillion stimulus Congress approved in the spring has largely run its course, with unemployment benefits, aid to small businesses, support for the airline industry, rental assistance and other programs expiring.

Despite fitful efforts at bipartisan talks, Congress has not acted since—ignoring pleas from economic leaders such as Federal Reserve Chairman Jerome Powell that more help was needed to boost the nascent recovery.

“As the covid pandemic surges again, the American people desperately need additional relief to deal with the economic fallout, but Speaker Pelosi’s intransigence and the Trump administration’s ineptitude have combined to deny it to them, at least until after the election,” said Michael Steel, a GOP strategist who was a top aide to former House Speaker John Boehner, R-Ohio.

There are multiple reasons for the collective failure. Trump’s approach was erratic, as he ping-ponged from calling off talks to demanding even more money than Pelosi. He never latched onto a consistent message, making it easier for congressional Republicans to ignore his haphazard directives as he lagged in polls. That added to Pelosi’s leverage at a moment when she’s expected to grow her majority in the November elections, eliminating any political imperative for her to make a deal.

In an interview on MSNBC late Monday, Pelosi pointed to White House chief of staff Mark Meadows’ comment over the weekend saying that “We are not going to control the pandemic.”

Senate Republicans under the leadership of Majority Leader Mitch McConnell, R-Ky., had little interest in the giant deal Pelosi and Mnuchin were negotiating, as they began to decouple their political fates from an unpopular president and eye future campaigns when a vote for enormous deficit spending could hurt more than it would help.

Throughout the debate on Barrett’s nomination, Democrats bashed McConnell and Republicans for jamming through a Supreme Court nomination instead of passing new covid relief. But the complaints fell on deaf ears as Republicans blamed Pelosi for the failure to act.

“Well, we’ve been working on coronavirus relief. Unfortunately, the speaker has not be able to agree to anything remotely reasonable,” McConnell said on Fox News Channel following the vote to confirm Barrett. “We can do two things at once. And we were trying to do two things at once. What we can do consistent with the Constitution, consistent with the fact there is a Republican president and a Republican Senate is confirm the vacancy to the Supreme Court.”

The next chance for action on Covid relief will come when Congress returns to Washington for a “lame duck” session following the election, though each sides negotiating position could change depending on the electoral results.

“We’ll come back in November,” said Senate Appropriations Chairman Richard Shelby, R-Ala. “The question might be, will there be something then?”

Chances for action in the lame duck are uncertain. Congress will be facing a Dec. 11 deadline when government funding will expire, requiring passage of new spending legislation to avoid a government shutdown. It’s possible new relief legislation could pass then.

If not, the country will likely have to wait until February for the next possible bill.