Bolstered by the success of the Indy Autonomous Challenge, organizers are exploring the creation of additional tech-centric prize competitions—perhaps one focused on autonomous aircraft—as a way to spark economic development.

To that end, the Indiana Economic Development Corp. has contributed $3.4 million toward the creation of a not-for-profit called the Indy Innovation Challenge. The Indianapolis-based organization will encompass both the Indy Autonomous Challenge and potential future competitions focused on performance automation technology.

The effort aims to establish Indiana as a global hub for performance automation activity.

“This is a way to ensure the longevity and the impact of the Indy Autonomous Challenge, while exploring whether that technology and those learnings could extend to additional technology platforms,” said Paul Mitchell, president and CEO of Indianapolis-based Energy Systems Network. ESN organized the Indy Autonomous Challenge, and it is now organizing and launching the Indy Innovation Challenge.

The Indy Autonomous Challenge—which focused on developing and racing autonomous race cars—attracted college-based competition teams from around the world who spent about 18 months developing software and preparing their cars for the inaugural race, which took place in October at the Indianapolis Motor Speedway. A second race in January at the Las Vegas Motor Speedway was part of the consumer-technology trade show CES.

“The Indy Autonomous Challenge has not only helped Indiana engage with global young talent, it has helped raise awareness and recognition of Indiana’s innovation ecosystem to a global audience,” IEDC Vice President of Entrepreneurship Dave Roberts told IBJ in an e-mailed statement. “Indiana is uniquely positioned to be a leader in innovation and in the technological advancements of traditional industries, and we are excited about the possibility of expanding new innovation challenges in the future.”

The IEDC declined to make Roberts available for an interview but said, “We look forward to sharing more when the timing is right.”

Mitchell said the Indy Autonomous Challenge has generated more than 4,000 media stories worldwide since the competition was announced in November 2019. Its culmination, the October 2021 race, drew more than 3,500 in-person spectators, and more than 60,000 people watched a live-stream broadcast of the race, which featured nine teams from 21 universities around the world competing for a $1 million grand prize. 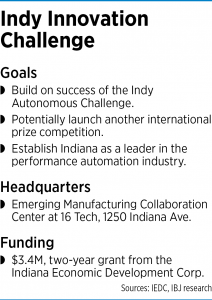 Mitchell said the autonomous challenge has already generated more than $100 million in investment, a figure that includes the financial support universities provided for their teams, plus financial and in-kind support from sponsors of both the teams and the race events.

To date, the challenge has spawned at least one startup—Driveblocks, a spinoff from the German team TUM Autonomous Motorsport. TUM was the grand prize winner of the October race.

“We want to build that into a set of lasting assets and ecosystem within the state, not just a one-off event that was fun to do,” Mitchell said.

In its grant application to the IEDC, the Indy Innovation Challenge specifically identifies vertical takeoff and landing technology—which is generating a high level of international interest and activity—as a potential subject of a future challenge.

“We’re looking first at something in the aerospace industry, because it’s such an important industry to Indiana,” Mitchell said.

Vertical takeoff and landing aircraft, also sometimes referred to as air taxis or flying cars, are being developed as vehicles that could potentially ferry passengers across town in major metro areas, or within a larger region. Among the many companies exploring the concept are Indianapolis-based Republic Airways and Rolls-Royce, which has a major manufacturing presence here. Both companies are early-stage investors in a vertical-takeoff-and-landing company called Eve Air Mobility, a spinoff of Brazil-based aircraft manufacturer Embraer SA.

Plans are already in the works for several additional Indy Autonomous Challenge events over the next two years, though locations and dates haven’t been announced.

But the Indy Innovation Challenge is in its very early stages, Mitchell said, so numerous details about the organization are still being determined.

He said the organization is conducting a feasibility study to determine what type of competition might make most sense; where and when it might take place; and what business, academic and government partners might be interested in participating.

The goal is to wrap up that feasibility study early next year, at which point the Indy Innovation Challenge will decide on a new challenge.

Observers say a strategy such as Indiana is pursuing can be effective—if done in the right way.

“They do help, at the very least, put communities on the consideration list for a site selector,” said David Clayton, assistant vice president of corporate partnerships and strategic initiatives at Clemson University in South Carolina.

Clayton attended Indy Autonomous Challenge events in both Indianapolis and Las Vegas because Clemson engineering students designed the hardware and software stacks that went into the challenge’s Dallara-built race cars.

“It was a great project. We were glad to be part of it,” Clayton said.

But something like the Indy Autonomous Challenge on its own won’t be enough to spur significant economic development, he said. It will also take factors like university resources, a supply chain to feed the industry, customers—and a community that’s appealing enough to attract
skilled talent.

“There’s no silver bullet,” he said.

“I applaud [Indiana] for doing it,” he said.

The difficulty with the tech-challenge strategy, Roberts predicted, will come in making Indianapolis “sticky” enough to attract and retain capital and talent—assets the city can build on long term.

“Indy is not sticky,” he said. “It has a very difficult time holding on to its tech workforce.”

But Roberts said other communities have achieved this, and so could Indianapolis, by taking some of the same, “very specific steps.”

He offered as an example the city of Austin, which has a large and growing tech sector.

One key factor in Austin’s success, Roberts said, was the creation of an endowed professorship at the University of Texas at Austin. An endowed professorship means the professor who holds that position can tap into a dedicated source of research funding from an endowment set aside for that purpose. That, in turn, can attract federal funding, students and other faculty members who want to be part of the research.

Forging connections with other communities can also be beneficial, he said. Austin is forging a relationship with Berlin, Germany. Both cities have a specialty in advanced manufacturing. Electric-car maker Tesla is based in Austin and recently opened a factory in Berlin.

Especially in the age of remote work, Roberts said, partnering with a peer community can help each community build its own economy. “You’re doubling your [talent] pool
almost immediately.”•