Home » Website operators must be strategic, authentic to rank high in Google results

The internet is a massive sea of information. And it’s only getting bigger.

So if your business is a minnow, bluegill or even a sturgeon in Lake Michigan, it can be pretty difficult to locate online.

It might alarm many business owners to learn that the vast majority of website pages get zero traffic from the world’s largest search engines, most notably Google. That means millions of websites and billions of pages within those sites aren’t getting a single hit, click or page view from Google searches. Nothing. Ever.

Search engines constantly change the complicated algorithms that determine which query gets directed to which websites. Many tech experts said search engine optimization tactics—coding designed to take advantage of those algorithms to net high website placement in searches—haven’t kept pace.

“The competition for attention is intense on the internet,” said Mitch Causey, a longtime SEO expert who heads local startup firm Demandwell. “There are literally hundreds of thousands, if not millions, of sites fighting for those top 10 spots in any search. That’s why so few websites get any traffic at all from Google.”

We’ll get to the importance of being in the top 10 a bit later.

First, consider the digital landscape to get an idea of the severity of the challenge.

The world has nearly 190 million active websites, up from 83.5 million a decade ago, according to internet research firm NetCraft. Millions more sites are considered inactive. 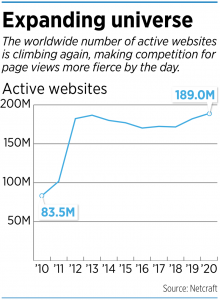 Even a whale of a website could have difficulty being found in the vast reaches of the internet. But that doesn’t mean people aren’t still casting their lines in hopes of hooking the right information.

And Google accounts for 76% of all web-search traffic, far ahead of the second-most-used search engine, China-based Baidu, which accounts for 15%. Yahoo, Yandex, Ask, DuckDuckGo, Naver, AOL and Dogpile have a collective 9% share.

The most frightening statistic for marketers and business owners comes from Ahrefs, a Canadian SEO specialist. A recent study by the firm found that a whopping 91% of all web pages get zero traffic from Google. Another 5% get 10 or fewer visits from Google searchers per month.

How is that possible?

SEO designs a website to include the links, sentences, phrases and words—including the order in which they are placed—that will grab the attention of search engines like Google.

Because search engines use complex algorithms to determine search results, SEO can get pretty complicated. But the basic premise is not: Website operators want the eyes of people looking for the goods, services and information they’re peddling.

The SEO specialty produced thousands of U.S. agencies, software companies and consultancies in the early 2000s. But according to industry experts, SEO know-how stalled, so, for several years, businesses haven’t gotten much better at driving traffic to their sites from search engines. That has slowly started to change, experts said.

Tricks of the trade

“People working on SEO used to focus on little tricks that would have some effect on search results—things like page load times, the way you place links and metadata structure,” said Tyler Foxworthy, founder and CEO of Vertex Intelligence, an Indianapolis company that builds artificial-intelligence-driven products. “The problem was, those things often aren’t related to the content people were searching for.”

During the late 1990s and early 2000s, ranking high in search results might require repeating your keywords throughout your web pages and meta tags, which are snippets of text in a page’s code that describe the page’s content.

Want to outrank a page that uses a keyword 100 times? Use the keyword 200 times. Today, that’s considered spamming.

To keep companies from gaming the system, search engines continually change the formulas they use to determine which sites get high placement in search results.

Google officials say the goal is to get users the very best content from their searches. For each query, a search engine ranks websites by the most likely to answer the question or need of the searcher.

But for marketers and business owners, the ever-changing SEO seascape can be downright maddening. And if a business can’t get its website to float to the top of those search results, the company could sink.

“You can think of it like a retail space. It’s all about location,” said Muhammad Yasin, executive vice president of marketing for Indianapolis-based marketing software firm Perq.

“Imagine if you purchased a location with no windows, you put up no sign and kept the door shut. How is anyone supposed to find you? Making sure you optimize your website is akin to making sure you have good windows, a nice sign—a road sign—and leave your door open to pull people in.”

Because people are generally impatient and impulsive, the vast majority of web browsers never bother to look at more than one screen of search results. Even though search engines list hundreds or even thousands of web pages for each query, a Google search usually lists 10 websites per screen. To get to another screen, users must scroll to the bottom of the current screen and click a small arrow.

“From my perspective, the competition for attention on the internet these days is beyond intense,” said Tony Newcome, chief technology officer for ActiveCampaign, a fast-growing Chicago-based marketing tech firm that recently expanded into Indianapolis. “We have more content than ever, and we have the same limited amount of time. It’s created a bit of a scramble in the SEO world.”

Although it could be argued that SEO and search engine marketing began with the launch of the first website in 1991, the story of SEO officially began in 1997.

According to Bob Heyman, author of Digital Engagement, we can thank none other than Bill Thompson, the flamboyant and at times foul-mouthed manager of rock band Jefferson Starship, for helping give birth to the field that eventually became known as search engine optimization.

Thompson was angry that the official Jefferson Starship website was ranking on page four of some search engines at the time, rather than at the top of page one. That anger resulted in a tirade in a 3 a.m. phone call from Thompson to Heyman, then senior vice president of audience development of a firm called Cybernautics. That call, Heyman said, created the SEO movement. We might never know if this story is more revisionist history than fact, but the origination date is not disputed.

When Google began to out-muscle other search engines in 2004, fueled by its initial public offering that year, it sought a better way to ensure its users got the best results from their searchers.

“It transitioned from a period known as the Wild West, to SEO Armageddon,” Demandwell’s Causey said.

Google started continually tweaking the way its search results were listed. That, SEO experts said, caused an exodus of frustrated marketers and techies from the industry, which led to a stagnation in SEO innovation starting about a decade ago. The result is a “knowledge gap,” Causey said.

“Google is a living entity. It’s constantly changing,” Perq’s Yasin said. But he added that Google has become more predictable and savvy SEO practitioners have increasingly learned to keep up.

“If you know what to look for, Google telegraphs the punch,” Yasin said. “They tell what they’re going to do and they do it. Once a year or every couple of years, they make a major change. But if you maintain your content as authentic and you’re being relatable, you’re going to be all right. The overarching thing to ask is, ‘Did I write for a person, and did I give them what they were looking for?’ Do that, and you’re going to win every time.”

The SEO industry has long been dominated by consultants. But that’s starting to change. Demandwell—a High Alpha portfolio company—and other firms are starting to create software platforms that can help marketers and business owners manage their own SEO efforts.

“The SEO industry is currently undergoing a renaissance, and the tools and strategies employed over the past two decades were built for a different era of marketing,” said Kristian Andersen, a partner at High Alpha.

The services of companies like Demandwell don’t come cheap, but Andersen insisted the return on investment is undeniable. He said, on average, a Demandwell customer pays about $25,000 annually for its services.

“Consulting is like providing Yoda, and the platform is a light saber,” he said. “We offer both of those things.”

Some experts say too many businesses are simply overlooking the importance of SEO, partly because of growing reliance on social media.

“People, including business owners, often don’t think about SEO,” Yasin said. “People bring over an understanding of social media from their personal life, so there’s an emphasis there. We’re not managing for SEO in our personal life, so it’s not like we have a built-in understanding of what it is. Only when talking to a marketing agency do you get the importance of SEO, and not every business can afford a marketing agency.”

Yasin said SEO is “part art, part science,” but added that more attention is being paid to the science side these days.

“Analytics tools, including some free tools like Google Analytics, cannot be overlooked,” he said. “If you are not looking at your numbers—your analytics—you are making decisions [without] information. That is your foundation. There are lots of great forms out there to help you know what information is out there and what actions to take in response to Google Analytics data.”

Though challenges remain, Vertex Intelligence’s Foxworthy said—“There’s still a lot of poorly written content that is not well-differentiated. Google doesn’t just give us traffic because we want it.”—he sees progress.

“Web designers have to focus on providing good content,” he said. “Marketers are waking up to the problem. Certainly, in the [software-as-a-service] world, we’ve seen a big shift to content marketing and away from the old SEO tricks.”

In what is commonly referred to as the “flywheel effect,” part of Google’s search-results algorithm looks at total unique visitors and page views. “This is the rich-get-richer, or preferential-attachment, phenomena,” he said.

Website operators can also pay Google to rank them high in search results, through an auction-style system in which Google sells certain key words. For Google, this has become an important revenue stream.

Opinions on the efficacy of the method for businesses vary. Some marketers say web users shy away from clicking on paid results, which are marked as an ad. But most say it’s a good way for a company to gain some page views, which will place a site higher in search engines, even when the company stops paying for key words.

Companies commonly pay $10 per click, but in categories such as insurance and legal services, they pay $70 or more per click.

“Paid search is not inexpensive,” Foxworthy said. “You can pay hundreds of thousands of dollars, but it can still be a worthwhile investment. It depends on the economics of your business.”•