Home » Self-funded firms take all the risk, all the rewards 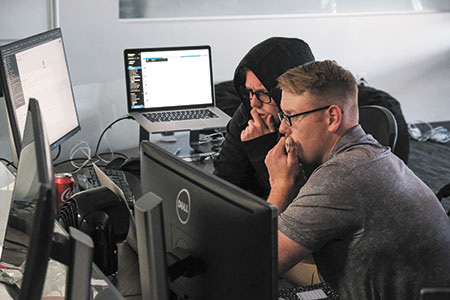 Venture capital is supposed to be the lifeblood of fast-growing tech startups. But a handful of Indianapolis-area companies are defying that widely embraced mindset.

ClusterTruck and Pondurance are among the local firms that are rapidly ramping up without venture capital.

The approach, known as bootstrapping, requires founders to start with nothing more than they can personally kick in and then plow much—if not all—profit back into growing the company.

Bootstrapping can be risky, and growth can be slower without outside cash.

But there are good reasons for founders to self-fund—chief among them the rewards they can reap when a company becomes profitable or sells for big bucks. The founders of successful local tech companies Delivra and One Click are among those benefiting from an acquisition after years of self-funding.

So are DoubleMap Inc. founders Ilya Rekhter, Peter SerVaas and Eric Jiang, who started the company while they were Indiana University students. DoubleMap was totally self-funded for nearly a decade until it was acquired last month by Ford Motor Co.

The tech company, which develops software and implements hardware that lets people track buses in real time, grew to 55 employees in Indianapolis before merging with a Utah company in January to add another 30 employees.

It methodically grew its customer base to more than 800, including some of the country’s biggest cities and universities.

“I have no problem with venture capital, but there are some companies that can do better without it,” Rekhter said.

Early on, DoubleMap started a process to raise about $1 million in capital, but the three co-founders decided not to go through with it.

“Investors wanted a faster return; they wanted to put ads in the app which we weren’t 100% comfortable with,” Rekhter said. “There were strategic differences along the lines of how we wanted to build the company.”

Entrepreneurs have a handful of reasons for choosing not to take on investors, a major one being control.

With each fundraising round, founders own a smaller percentage of their company—and they have investors and board members to please. Venture-backed firms are under pressure to produce a three to 10 times return on investment within five years.

Bootstrappers, on the other hand, retain all company profits and decision-making power.

And if a company becomes successful while self-funding, the founders can always seek venture capital later if they need it. In that scenario, investors often take less of the company and do so on the founders’ terms because the investment is less risky.

But the initial reason for bootstrapping is that it’s the most attainable option for first-time entrepreneurs.

“You don’t have to go through what can be a difficult, cumbersome process of raising capital to get started,” said Frank Dale, who began his career with WhatCounts, a Seattle-based bootstrapped tech firm. “In some ways, it can be a shorter on-ramp.”

Another leg up for bootstrappers is the ability to focus more narrowly on creating a quality product for customers, rather than having to also expend time and energy on fundraising and impressing investors.

And companies that fund their own way can afford to be more nimble. Without pressure from investors, stakeholders and a board, a startup can change direction in response to customer feedback much more easily.

“There’s no doubt, building consensus with a board and investors can be time-consuming,” said Dale, who has led several venture-backed firms and is now founder and CEO of Costello, a local maker of sales-management software.

But all that freedom comes with drawbacks.

A bootstrapping founder stands to gain a lot more if the company is a success but also to lose more if things go south.

And a self-funded company usually grows more slowly. Entrepreneurs often have to keep their day jobs and work on the startup project on the side. That means the startup launch takes longer to execute, at the cost of valuable time in building early market share—especially for startups in a new sector.

When entrepreneurs do eventually take the leap to pursue the project full time, they’re particularly out on a limb if the fledgling company doesn’t yet generate enough profit to pay the founders’ living expenses.

Rekhter was one of those bootstrappers who had another job while trying to get his startup—DoubleMap—off the ground. Then a customer, IU, asked for some revisions to his company’s app. When he told school officials how long it would take him to get it done, they said that was too long. At that point, Rekhter knew it was decision time.

“Leaving my day job was a risk, but if we wanted to make the company work and really grow, we had to go all in,” he said.

Self-funders also don’t have the cushion of outside investment to weather the inevitable ebbs and flows of business.

“We were always trying to save some of our profit, like a rainy day fund,” said Yaw Aning, who bootstrapped local digital product agency Sticksnleaves LLC before launching his latest company, Malomo.

The goal was to have six to nine months’ worth of capital in reserve, Aning said. But about 80% of revenue went to salaries and then payments for office space and equipment, contractors and taxes, and a little for marketing.

“After all that was paid, we put what we could in savings,” he said. “There would be months with tons of work and then a period where we didn’t have much work. There were definitely some months where my partner Anthony [Smith] and I didn’t take a paycheck.”

Landon Lewis, who in 2008 co-founded local cybersecurity firm Pondurance, said revenue ups and downs aren’t as big a deal when it’s just the founders to pay.

“When you turn your startup into a real company with payroll, [employee] insurance and 401(k), everything changes,” Lewis said. “The management of that cash flow becomes so much more critical. Whether you have work or not for a period, you still have to make payroll.”

Not only has Pondurance declined to take any investor cash, it took out only one small loan, for an office improvement in 2015. The company currently has no debt.

Pondurance, which now has 50 employees, cranks out a seven-figure annual profit, but that doesn’t mean Lewis is footloose and fancy free.

“When you’re bootstrapping, you have to do a lot of forecasting and have your business processes firmly in place,” he said. “You have to know your customer base and you have to know what [business] is going to close when. You have to run in an optimal, lean fashion.”

Lewis and his partner, Ron Pelletier, have become experts on when to reinvest Pondurance’s profit to minimize the firm’s tax bill and have also become well-versed in state and federal research and development tax credits, which help firms like theirs invest in building or testing products.

“Those tax credits can be a six-figure savings,” Lewis said. “They’ve been huge for us.”

“In our case, putting capital to work would have been nearly impossible,” Lewis said.

But there’s more to lose than money when companies opt to go it alone. Investors usually provide advice and help with strategic planning as well as valuable connections to people—including additional investors, possible team members, advisers, potential customers and even larger organizations that might eventually buy the startup as it matures.

“When you bootstrap it, you’re all alone,” Aning said. “That’s one of the biggest disadvantages, not having that guiding force and sounding board.”

When Aning and Smith founded Malomo, a company that produces and sells a software package that lets businesses weave marketing messages into shipment notifications and updates, the duo decided to seek venture capital for that very reason.

“We had some gaps in our team in marketing and enterprise sales. So we found investors who could coach us and teach us in those areas,” Aning said.

Malomo raised $600,000 in a pre-seed round, and Aning anticipates raising a low- to mid-seven-figure sum for the firm’s seed round early next year.

While a handful of local and national companies have achieved a measure of success as bootstrappers, most companies that continue to grow will eventually need some kind of outside funding.

The vast majority can’t generate enough cash to “pursue exceptional growth,” said Eric Smith, chief operating officer for Greenwood-based One Click, an online eyewear sales company that was bootstrapped by owners Randy and Angie Stocklin until it was acquired by Foster Grant in late 2018.

One Click self-funded for 13 years and grew into an 80-employee company.

“In the tech space, because of the immense upfront investment needed to build the platform, venture capital often makes a lot of sense,” he said. “For us, we had cash-flow-generating properties and were able to methodically fuel the company’s growth.”

Only in 2017 did One Click officials ponder a change.

“We came to a point where we needed a partner to help us solve larger-scale issues to take One Click to the next level,” Smith said.

Aning and Anthony Smith initially planned to bootstrap Malomo but decided that would slow them down.

“The market we were in was growing really fast and competitors were moving in,” Aning said. “If we didn’t invest cash and invest it quickly, we wouldn’t have been able to compete. In a situation like that, we learned you have to race to win the market.”

Some startups in hot sectors race to win every customer they can—at almost any cost.

“One of the first things a prospective customer will check is how many customers a company already has,” said Costello’s Dale. “Having customers lends a lot of credibility to a firm. So, if you can be the first company to gain a critical mass of customers, that just builds on itself and you become the flywheel. That’s nearly impossible to do when you’re bootstrapping.”

“If you see us at a trade show, we don’t have carpet or couches in our booth and we don’t have a hundred salespeople falling out of the sky, but we most certainly compete,” Pondurance’s Lewis said. “We are competing with companies that have taken $100 million in capital.”

And it doesn’t mean bootstrappers can’t have a huge exit.

“I’ve seen instances where the principals of a bootstrapped company have gotten a bigger payout than a venture-backed firm in the same sector,” Dale said. “Oftentimes, founders of venture-backed firms own a very small slice of the company by the time it is acquired or goes public. The owner who bootstrapped it, essentially, gets all the returns from the exit.”•

One thought on “Self-funded firms take all the risk, all the rewards”