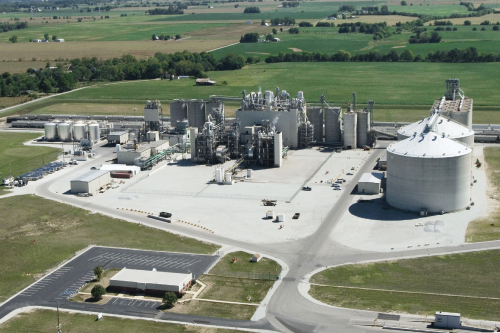 A St. Louis-based grain and soybean manufacturer is planning to spend $445 million to expand its processing plant in Morristown.

Bunge North America Inc., an agribusiness and food company, plans to invest $360 million in new machinery and equipment, along with an estimated $85 million in construction and building improvements at its soybean crushing plant at 700 N. Range Line Road.

The effort is expected to result in 70 additional jobs by the end of 2025, raising employment at the plant to 177.

With a total capital investment of nearly half a billion dollars, Bunge’s expansion would be the largest economic development project in Shelby County since South Dakota-based biofuels productor Poet LLC built a $160 million facility in Shelbyville, creating 45 full-time jobs., according to Brian Asher, executive director of the Shelby County Economic Development Corp.

Bunge last month signed an incentive agreement with the Indiana Economic Development Corp. that would land the company $1.75 million in tax credits if it meets hiring and investment goals. In August, the Morristown Town Council agreed to provide real and personal property tax abatements to support the expansion.

Bunge North America’s parent company, Bunge Limited, is one of the world’s largest processor of oilseeds, with more than 23,000 employees across 300 facilities in more than 40 countries.

The existing Bunge plant, which opened in 1995, sits on 110 acres and processes 60,000 truckloads of soybeans annually. The plant processes soybeans into animal feeds and soybean oil.

Bunge, which acquired the plant in 2010 from Morristown Grain Co., has been tight-lipped about the expansion plans, which has led to some frustration among local officials who say the lack of details have made it difficult to determine whether the town would need to expand its wastewater treatment plant.

“It would be nice to be brought into the discussions to be able to guide the town, but we have not,” said Linda Sanders, business development representative for Wessler Engineering, which designed the town’s wastewater treatment plant.

During a planning commission meeting earlier this year, a Bunge official said the company was planning to process a new type of soy meal that would be used in plant-based meat products, according to Jesse Berling, the town’s planning director.

The company recently inquired about building permits it would need and has submitted preliminary drawings to the town’s planning commission, Berling said, adding that the project will not require additional improvements to the town’s wastewater treatment system.

Bunge’s recent efforts at its other facilities could shed light on what it has planned in Shelby County.

The beans also need to be processed completely separately from traditional soybeans, which could account for the high price tag of Bunge’s expansion plans.

In a written statement, a Bunge spokesperson declined to answer specific questions about the project while emphasizing that the company has not made a final decision on whether to move forward with the expansion.

“Bunge is considering locations for expanding production capacity as part of our growth strategy,” the statement read. “Morristown is one of the locations under consideration and we have been in discussions with local governments about tax abatements, utility and other location specific needs as part of the decision-making process.”