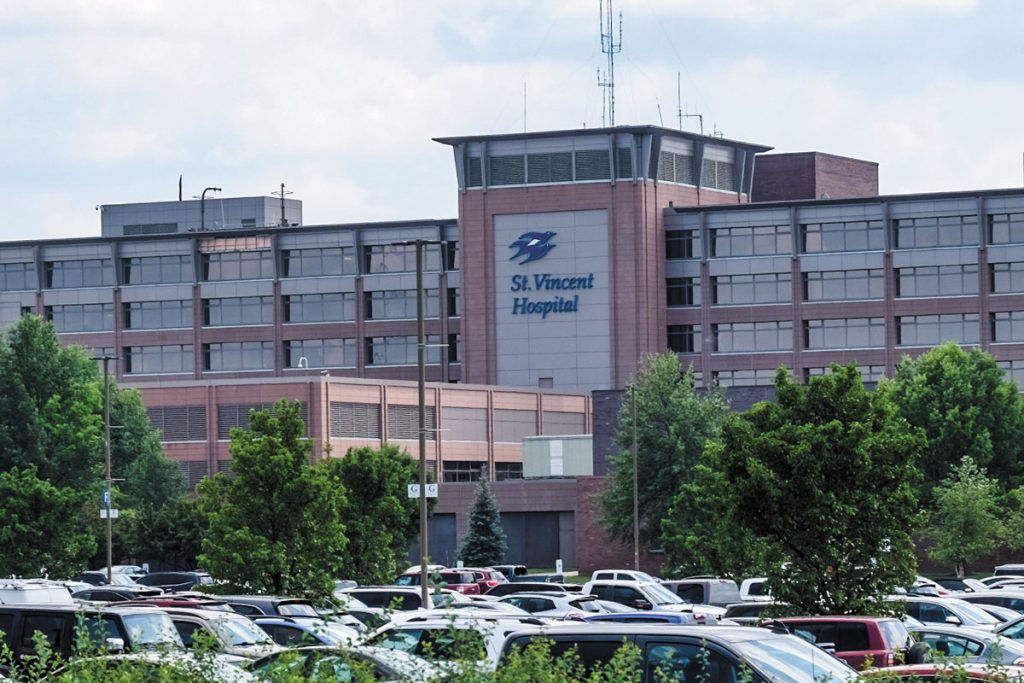 In the past five years, St. Vincent has shelled out more than $80 million to update its flagship campus on West 86th Street, renovating operating rooms, installing a new nurse-call system, building a brand-new training center for doctors, and expanding parts of its women’s and children’s hospitals.

But that might be just a fraction of what the 45-year-old campus will need in coming years, some experts say. The health system will likely have to pump hundreds of millions of dollars into upgrades to keep it competitive long term.

And that financial reality might explain why St. Vincent appears to be considering a brand-new hospital just a mile north. St. Vincent has purchased more than 30 acres in the area near 96th Street and Spring Mill Road in Carmel, but has declined to reveal its plans for the site.

St. Vincent officials say they remain committed to the West 86th Street campus, and will continue to invest in existing operations there.

But they did not rule out moving certain functions or services to a new location or building a new hospital at the Carmel site, which sits on the Hamilton County/Marion County line.

“The health care landscape is changing at a rapid pace, with consumers demanding more choices, including virtual care and hospital-at-home options,” St. Vincent said in a statement to IBJ. “Given this shift, we are taking some time to consider services within our entire central Indiana footprint so that we can continue to provide the highest quality of care in the most appropriate and cost-effective setting.”

Some experts in hospital design and construction say it is usually far easier to build a new hospital than to overhaul an old one. Trying to fit new technology or equipment into an old building is a big challenge, as is upgrading aging mechanical systems and trying to adapt to new building codes.

Around central Indiana, several health systems have opted to build from scratch, as Eskenazi Health did in 2013 and Indiana University Health is now doing in Bloomington. Both projects replaced hospitals that studies showed would have been more expensive to update.

Monte Hoover, an architect and senior health care planner at BSA LifeStructures, an Indianapolis-based design and engineering firm, said he wouldn’t be surprised if St. Vincent relocated some of its services to other locations in new buildings to save money.

“I think strategically, they should be looking at other locations, in addition to that one,” he said. “The flagship isn’t going to go away. But it’s a matter of right-sizing that facility and modernizing it as clinically warranted for services they would still want to provide there.”

He estimated it could cost several hundred million dollars to modernize St. Vincent’s flagship campus, if the health system wanted to keep and update everything it now has at that site.

It is also home to a Level 1 trauma center, an emergency department and one of only three organ-transplant centers in Indiana. (The other two are at IU Health’s Methodist Hospital near downtown and Lutheran Hospital of Fort Wayne.)

Some other hospital consultants say St. Vincent could easily spend a half-billion dollars updating the campus. Ed Abel, director of health care practice at Indianapolis-based Blue & Co., an accounting and consulting firm, compared the campus to an aircraft carrier that was once the pride of the fleet but is now showing its age.

“The cost to renovate and retrofit what they’ve got has got to be massive,” he said. “It’s a huge structure.”

Over the years, St. Vincent hasn’t shown reluctance to move to newer facilities or choicer locations. One of the oldest and most familiar names in Indiana health care, St. Vincent started in 1881 when four members of the Daughters of Charity, a Catholic religious order, opened an infirmary downtown, near Vermont and East streets.

Eight years later, it moved the operation—by then a 50-bed hospital—to a bigger building at South and Delaware streets. In 1913, still growing, it moved to a 325-bed facility at Fall Creek Parkway and Illinois Street, where it remained for 61 years.

Other hospitals, too, were springing up in Indianapolis, including Methodist Hospital and what would become Community Hospital East on Ritter Avenue and East 16th Street.

By the early 1970s, St. Vincent was ready for another move—one that would take it far out of its area, to the largely undeveloped farmland of the northwest side, its current site.

“When they moved up to 86th Street, that was a big deal,” Abel said. “That would become a very fast-growing part of town.

St. Vincent has been very strategic in locating where the people are, which is important.”

Over the past decade or two, St. Vincent has gone even farther outside the city, opening hospitals in Carmel and Fishers. It has bought or opened smaller hospitals from Anderson to Brazil.

Now it’s looking around again, trying to decide where to plant its flag next.

Last year, the health system surprised neighbors near West 96th Street and Spring Mill Road when it anonymously filed plans, through a real-estate partner, to rezone about 30 acres of undeveloped land it had under contract. Early plans called for a $1 billion major health complex that would include nine buildings, four parking garages and a helipad.

Neighbors said the plans would increase noise, traffic and water runoff for the area, which is now filled with open fields and woods, and surrounded on several sides by residential subdivisions.

Carmel officials, including Mayor Jim Brainard, said they wouldn’t approve the rezoning request without specifics, and St. Vincent and its partners pulled the request.

But a few months later, St. Vincent acknowledged it was the health system behind the proposal. And last fall, it said it would go ahead and buy the land, but still hadn’t made any decisions on how to develop the site.

“We still have no plans for it,” he said at IBJ’s Health Care & Benefits Power Breakfast on Sept. 26. “When I go back and tell neighbors, what we tell businesses, is that any company that is looking to expand and grow and evolve, you have got to make sure that you have got the infrastructure to do that and that includes land and geographic expansion.”

He added: “We are taking our time and being very thoughtful to it because we don’t want to build something that won’t get utilized and spend precious dollars and capital resources to do that.”

The property is attractive for development because it is just west of one of the busiest intersections in the region, Interstate 465 and U.S. 31, near the busy Meridian Corridor, which would make it convenient for patients for miles around.

It also sits in one of the highest-income areas in the state, on the border of Carmel and Indianapolis’ northern neighborhoods.

Just to the west, St. Vincent has already bought nine of 13 residential parcels in the Lacoma Estates subdivision, signaling it could expand beyond the original 30-acre footprint.

Some nearby neighbors say they are keeping a close eye on the site for clues as to St. Vincent’s next move. Mostly, they say, they just want assurances that St. Vincent won’t put a full-scale hospital there, with all the traffic and noise that could bring. But they say they can’t get the health system to show its hand.

“It’s perplexing and concerning,” said Hector Gonzalez, president of the Cedar Knolls subdivision, on the southwest corner of Spring Mill and West 96th. “We’re being told that nothing is on the docket, nothing is being planned at this point.”

Sally Page, president of the Belle Meade subdivision on the southeast corner of the intersection, wonders why St. Vincent bought so many residential parcels in the nearby Lacoma Estates without a firm plan. Many of the residents there previously told IBJ they were offered 40% premiums over market value.

“We have asked St. Vincent for an update on what they plan on doing with those homes now that they claim they have no current plans for anything,” Page said.

But despite repeated requests, she said, she’s been unable to get an answer.•