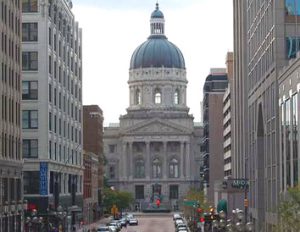 Top Indiana Republicans are inclined to wait another year before further boosting school funding despite a fall Statehouse rally by several thousand teachers and state tax revenues that are growing faster than expected.

Members of the Republican-dominated General Assembly are set to return Monday to the Statehouse in Indianapolis for their 2020 session, during which they will face continued calls from teacher unions and Democrats for better teacher pay and less reliance on standardized student test scores for evaluation of schools and educators.

Republican Gov. Eric Holcomb wants to wait for recommendations later this year from his teacher pay commission rather than have lawmakers take action during their session that’s set to last until early March.

Legislators are expected to quickly approve proposals to delay penalties to schools and teachers from lower 2019 student scores on the state’s new ILEARN standardized test. Holcomb also wants them to enact a statewide ban on drivers using handheld cellphones.

A look at some of the top issues:

Several thousand teachers surrounded the Statehouse for a November rally that prompted the closing of more than half of the state’s school districts, calling for increases to Indiana’s lagging teacher pay and more respect from Republican lawmakers.

Teacher union leaders and Democratic legislators maintain the state has money to give more to schools now—pointing to about $300 million in unexpected tax revenue that the state collected last budget year and nearly $250 million, or 4%, that’s come in beyond projections since July 1.

Holcomb wants legislators to direct about $300 million toward paying cash rather than borrowing money for several planned construction projects, such as a new veterinary hospital at Purdue University and building plans at Ball State University, the University of Southern Indiana and Ivy Tech State College in Columbus. T

The governor’s request includes $50 million for replacing a nearly century-old structure at the Indiana State Fairgrounds—a project panned by Democrats as showing greater priority for a swine barn than teacher pay or other neglected needs.

Holcomb and Republicans say the state budget’s 2.5% increase for K-12 schools for this school year and next represents “historic, unprecedented progress.” He said more needs to be done to make Indiana teacher pay more competitive with other Midwestern states but will wait on the report from the teacher pay commission he appointed in February 2019.

“We are going to do it methodically. It’s going to be formulaic,” Holcomb said.

The state’s largest teachers union is asking for $75 million that it says could provide a 1% across-the-board raise for teachers as a “down payment” so the pay gap doesn’t grow larger.

“Let’s face it—the governor isn’t going to get us into the top three in the region by suppressing Illinois’ pay scale,” Indiana State Teachers Association President Keith Gambill said. “They are going to have to lift the salaries of Indiana teachers. And to think that we can wait a year and we’re going to be closer to meeting that goal is short sighted.”

Education advocacy groups estimated last year that a 9% funding increase was needed to boost average teacher pay of about $50,000 a year to the midpoint of Indiana’s neighboring states, while Indiana Superintendent of Public Instruction Jennifer McCormick cited a study showing Indiana as the state with the lowest teacher salary increases since 2002.

Holcomb and GOP legislative leaders are backing a one-year delay in using the student results from the spring 2019 ILEARN exam so they don’t hurt teacher evaluations or the A-F ratings for schools. That comes after language arts and math results released in September showed about 48% off students in grades 3-8 met or exceeded proficiency standards in those subjects. Those are both more than 10 percentage points lower than the passing rates in 2018 under the now-discarded ISTEP exam.

Teachers want to suspend the use of those student test results on teacher evaluations and in determining pay raises, saying the “high-stakes tests” don’t accurately demonstrate teacher performance.

Republican House Speaker Brian Bosma, who has long supported the use of student scores for evaluating teachers, said recently lawmakers should take a “hard look” at ending that practice.

“Maybe that doesn’t make as much sense as it seemed to 20 years ago,” Bosma said.

Holcomb and Bosma both recently backed raising the state’s minimum age for smoking and vaping from 18 to 21, but with Congress voting in December to make that the national age it is unclear what, if any, steps the Legislature will take on the issue.

The governor and top GOP lawmakers, however, are firm in their opposition toward legalizing the use of marijuana. That’s even as recreational marijuana sales have started recently in Illinois and Michigan and medical use is allowed in Ohio.

Bills have been filed to end possible prison sentences for possession of small marijuana amounts and permit some medical marijuana use in Indiana, but similar proposals haven’t received committee hearings or votes in previous years.

Anti-smoking advocates want the state to boost its cigarette tax and start imposing a tax on vaping liquids, but that is another matter GOP leaders say they won’t take up until the 2021 session when a new two-year state budget is written.

The governor’s office says 20 other states already have similar cellphone bans and that the crash risk is 3-1/2 times greater when a driver is using a handheld device.