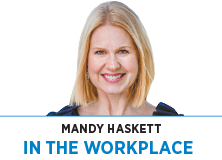 One hundred thousand years ago, there are believed to have been at least six human species inhabiting the earth. Six different kinds of human. About 70,000 years ago, along our path toward domination, Homo sapiens (that’s us—the only sapiens left) formed elaborate structures called cultures. Some researchers believe that has something to do with why our species has prevailed.

Professor Yuval Noah Harari explains that cultures were formed on the bedrock of three key species differentiators: our unique ability to cooperate with one another in large numbers, our capacity for language, and our exclusive belief in myths—things we’ve never experienced with our senses but trust nonetheless.

I spend a lot of time thinking about culture—how it started, and where it’s going. It’s workplace culture I’m thinking about today. With “flexwork” vying for permanence, leaders are craving ways to strengthen their work cultures.

Pre-pandemic, there were only 5 million remote workers. That number skyrocketed to 60 million in 2020 and is expected to continue hovering around 40 million for the foreseeable future. Flexible, hybrid and remote work are here to stay.

Now, couple this flex-movement with the broad discontent that drove 33 million people to quit their jobs recently, and leaders have an unparalleled chance to remake culture.

Not unlike the habits that formed cultures 70,000 years ago, we can think about culture at work as a common set of behaviors, and underlying mindsets, that shape how people interact. And we can’t talk about culture without talking about leadership. The leaders’ behaviors and mindsets are what create a predisposition for people in large groups to behave a certain way.

Last month, the MIT Sloan School of Management released the top predictors of attrition during the Great Resignation. Topping the chart at No. 1: toxic corporate culture.

“A toxic corporate culture is by far the strongest predictor of industry-adjusted attrition and is 10 times more important than compensation in predicting turnover,” cite researchers.

This happens when the observable behaviors of the leaders no longer align with the needs and/or beliefs of the workers, causing the humans to leave and find a new culture (and leader) that’s more beneficial, more harmonious, more catalytic to their survival.

If you want to strengthen your culture, but your people are now further from the heat of the proverbial campfire, consider these evolution-inspired questions:

◗ What do you pay your office for?

The office is the new offsite. The days of showing up for the sake of it are over. How will you leverage space strategically to foster cooperation, collaboration and innovation? Historically, office spaces enabled systems. But people enable productivity. When leaders evolve the systems that foster our inherent drive to cooperate and collaborate, cultures improve, too. Clarify expectations in the new system, and leverage in-person time with intention.

◗ Describe your leaders out loud. Did you use adjectives or verbs?

This language matters. Leadership, within the context of an organization, is a job function: It is an intentional practice of engaging others to get the best results. We strengthen workplace cultures through actions—clearly observable behaviors. When we list a set of qualities that a leader should be—like respectful, courageous or self-aware—we’re relying on our own subjective (often conflicting) definitions of those words.

Instead, identify the observable behaviors leaders need to display. Verbs, not adjectives. Here are some examples—listens thoroughly, provides timely feedback, encourages diversity of thought. As managers move to lead more remote teams, they will be the windows through which remote employees experience your entire culture. Are your leaders aligned and equipped to display these behaviors? Their development will be your most direct culture-improvement strategy.

◗ Do your people connect to your purpose?

“Any large-scale human cooperation—whether a modern state, a medieval church, an ancient city or an archaic tribe—is rooted in common myths that exist only in people’s collective imagination,” writes Harari. Two people who have never met can nevertheless spend time working side by side, raising money and building a school in a developing country because they share the belief that education is the gateway to freedom.

Our species corporates around our beliefs. Workplace culture is fertile ground to exercise synergies in value systems. Include questions about values alignment in your hiring practices. And create clear line of sight for team members to connect their daily tasks to their larger purpose.

Humans aren’t very powerful creatures—it’s true. We’d lose every round in the ring with a chimpanzee. But you could never convince a chimp to give you a banana simply by describing, over Zoom, the behaviors that would earn him unlimited bananas. All healthy cultures are driven by a leader’s effectiveness at harnessing our species’ true source of power—our cooperative intelligence.•