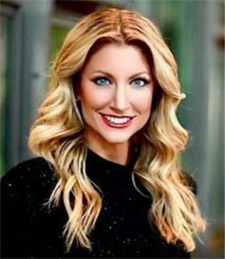 “McKinzie will bring stories and interviews from coast to coast,” McCoy said in written comments. “This new position marks a commitment on the part of WISH-TV to develop and showcase even more lifestyle content for our viewers.”

In addition to working as a TV commercial pitchwoman for multiple local companies, Roth has worked on-air for a number of media organizations, including Emmis Communications, Radio One, Cumulus Media and WXIN-TV Channel 59. She also worked as on-court emcee for Indiana Pacers games. She also served as a TV host for Comcast from 2009-2015.

Roth, a Hoosier native who graduated in 2003 with a broadcast journalism degree from Indiana University and from Carmel High School, previously worked for WISH in 2012 as a lifestyle correspondent.

McCoy, owner and CEO of Circle City Broadcasting, has made a big commitment to expanding WISH’s news and local programming since he bought the station.

“Our Entertainment Insider is just one of several additions to our on-air staff that is dedicated to bringing even more unique, focused content to our viewers,” McCoy said in a statement. “McKinzie’s central Indiana roots, experience and passion for pop culture will bring a unique viewpoint to coverage of the entertainment industry. I am excited to watch this new content area develop across all our platforms.”

Last fall, WISH announced new, specialized reporting positions for the state’s first dedicated multicultural reporter and the state’s first dedicated medical reporter. WISH-TV produces 77 hours per week of news and original programming, more than any other television station in the state, and among the most of any station in the country, according to McCoy.