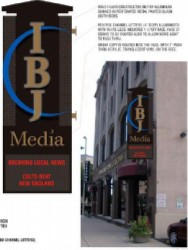 The city’s planning staff is recommending denial of an electronic message screen proposed as part of a new sign for IBJ Media Corp., the parent company of Indianapolis Business Journal. The company has made several minor changes to the color and size of the sign at the request of city planners but has been unable to win support for the 3-foot-by-5-foot variable-message portion, which would scroll headlines from the newspaper.  Such signs were banned by urban-design guidelines adopted in 2008, because of concerns about urban feel and sign clutter. "Placing an electronic message sign on an historic building would wholly detract from the building’s façade and severely diminish the contextual relationship between the building’s signs and its façade design," planning staff said in a report. "Historically, projecting signs were common on building elevations. Electronic message signs would be a significant change from historical practices." Other than the electronic portion, the planning staff said it supports the sign. The building, constructed in 1923, already has one projecting sign for Morton’s The Steakhouse at the intersection of Washington and Pennsylvania streets. The new sign would project from the northwest edge.  A hearing on the matter has been moved to Jan. 26. An earlier post is here.