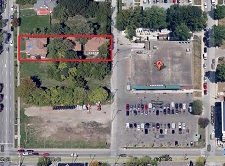 the cramped, old-format location at 16th and Central Avenue is on hold again after the chain failed to acquire a key parcel. Kroger has been buying properties for several years in hopes of building a new store and fuel center. The chain owns several parcels including at the northeast corner of 16th Street and Central Avenue and a narrow strip behind its existing store. The missing piece is a row of three 1930s apartment buildings that occupy a large lot between Central Avenue and the existing store, said Kroger spokesman John Elliott. "That’s the linchpin piece," he said. "We thought we had a real estate broker that was watching to pick it up for us out of foreclosure but somehow that didn’t come together and I don’t know why." He said the previously vacant buildings are being renovated. Elliott said the existing 22,000-square-foot store is "beyond worn out and can't be saved." Kroger stores now are 70,000 square feet or larger. He said the only way Kroger could redevelop the site without the missing parcel would be to build its fuel center at the intersection's vacant northwest corner. The fuel element has been a nonstarter among many neighbors, regardless of location. "For Kroger that's a deal killer," Elliott said. "We need food, fuel, pharmacy and floral or the business model will not work." An earlier story is here.