Welcome to What’s New Wednesday, a new feature profiling local startups—and the entrepreneurs behind them. This week, we meet Adam Howell and Matt Simon, who opened Technical Threads in Greenwood in May.

Owners’ background: Business partners Matt Simon and Adam Howell met while both were working in sales for construction-supply behemoth Ferguson Enterprises, which has more than two dozen locations in Indiana. 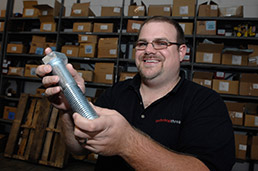 Simon, 30, is a St. Louis native who earned a business degree from the University of Evansville. He stayed there after graduation, selling specialized steam equipment before joining Ferguson. Simon moved to central Indiana in 2008 and now lives in Greenwood with his wife. They are in the process of adopting a baby boy from Ethiopia.

Howell, 28, started studying business at Franklin College and finished up at Ivy Tech Community College’s Bloomington campus. He started his career with Fastenal, the giant of the fastener industry, before moving on to Ferguson. He lives in Franklin.

Why started business: The men were working 70 hours a week in a “high-dollar, high-profile and high-pressure” sales environment, Howell said, and they simply couldn’t imagine keeping it up for another 30-plus years.

So they began talking, casually at first, about how to break free. They spent Saturdays at a Starbucks in Franklin, putting together what would become a 50-page business plan that addressed every contingency they could imagine.

“We talked about everything,” Simon said. “We do business the same way.”

With potential vendors and clients identified and cash flow projections in hand, they set out to sell fasteners—think screws, bolts, nuts, washers and the like—to industrial customers. In the past three months, they’ve established a “laser focus” on serving heavy industry, including power plants and oil refineries.

Competitive advantage: The partners believe their small size gives them an edge. They are able to work directly with customers to find the right part for the intended use, including specialty pieces.

“Big companies are the best competitors for small businesses,” Howell said. “They’re not as efficient, and they can’t react as fast.”

That’s where their pre-launch planning helped. Before they hung out their shingle, the men spent countless hours figuring out how they’d track products as they come in and out of their Greenwood warehouse.

”On Day 1 we had 14,000 part numbers set up,” Simon said. “We wanted to have  systems in place. The first day, we took orders and were able to process them in an efficient manner.”

Potential problem and contingency plan: Cash flow is important to any small company, and getting paid is a primary concern. Howell and Simon said that hasn’t been a problem for them so far, but they’re in a good position to handle slow payments since the business does not have any debt.

That, too, was intentional.

“We wanted to do something that was scalable and sustainable for our lives,” Simon said. “A lot of people invest money in the stock market. We decided to invest in ourselves.”

And they spent the bare minimum, using most of their seed money for technology. Their office is utilitarian at best, furnished through Craigslist.

“I’d rather spend money on stuff that makes us money,” Simon said.

First-year goal: Business has been brisk—enough so that Simon and Howell say they’ve already exceeded their expectations for the year.

Both owners are drawing a salary, and they’ve met their profit goals for 16 weeks in a row—and counting. Now they’re looking to hire someone to help out in the warehouse.

“We’re basically where we projected we’d be in years two and three,” Simon said.

“We keep raising our personal goals,” Howell chimed in.

The men declined to share specifics of their financial plan, citing competitive factors.

“When you’re starting out with no market share, you don’t need the whole pie,” Simon said, “just a piece of it. We just need to sell more of X than we pay out of Y.”