Indianapolis has been eliminated as a candidate to host the 2016 U.S. Olympic swimming trials at Lucas Oil Stadium. USA Swimming told local leaders that the venue would be “challenging for creating an intimate swimming setting.”

NBA All-Star Game alluring, but no local bid in sight

The 1985 NBA All-Star Game remains the only all-star game the league has held in Indianapolis—a curious omission given the city’s propensity for landing big-time events.

A local group led by the Indiana Sports Corp. is bidding to bring the U.S. Olympic Swimming Trials to Indianapolis for the fifth time. But the event wouldn’t be in the 4,200-seat IUPUI Natatorium. Instead, officials want to host the 2016 trials in 63,000-seat Lucas Oil Stadium.

MELANGTON: When it comes to sports, strike while the iron is hot

In many ways, our schedule of events defines Indiana Sports Corp. That—along with our youth initiatives that will touch 185,000 young people throughout Indiana this year—is what separates us from our competitors in 500 other markets throughout our country.

League officials said a Super Bowl Village like the one in downtown Indianapolis will now be a requirement for future cities hosting the big game.

Since Tuesday, fans, coaches and prominent journalists have fired off more than 150 messages on Twitter or on blog posts either blasting the Indianapolis-based NCAA or praising Greg Shaheen, who had overseen all 89 of the NCAA’s championships since August 2010.

Allison Melangton, who led organizing efforts for the 2012 Indianapolis Super Bowl, will succeed Susan Williams as president of the Indiana Sports Corp., the organization announced Friday.

USA Track & Field has repealed restrictions on uniform advertising that angered athletes across the country, but it remains to be seen whether athletes will take advantage of their renewed freedom.

Officials are confident attendance at the Big Ten men’s basketball tourney will top last year’s total of more than 86,000 and could surpass 90,000 for the first time since 2006.

Allison Melangton and her Super Bowl Host Committee staff helped turn a one-day football game into a 10-day celebration that attracted 1.1 million people downtown and millions in visitor spending. But with the game over, Melangton, doesn’t know where her own career path will lead.

After the Super Bowl, what’s next for Indianapolis sports?

Barely a week has passed since Indianapolis hosted America’s most popular sporting event, and already the Indiana Sports Corp. is retooling its playbook.

Tourism leaders in Chicago are launching an initiative some observers think is a direct shot at Indianapolis. In October, the Chicago Convention and Tourism Bureau formed its own sports commission and fed it $300,000 in startup cash.

The $125,000 in funds from the city’s Capital Improvement Board will help the Indiana Sports Corp. put on the Big Ten Football Championship game in December and basketball tournament in March.

Big Ten game will have big impact in Indianapolis

The owner of Pan Am Plaza’s parking garage, which the city partially closed on Wednesday over safety concerns, has fought legal battles over the damage with Indiana Sports Corp. and Central Parking System.

Indianapolis outbid Chicago for the rights to host the Big Ten Conference football championship game through 2015 and also landed the 2014 and 2016 title games in men’s and women’s basketball.

Qatar was selected as host of the 2022 World Cup, beating out a bid by the United States to bring soccer's showcase back to America for the first time since 1994.

Super Bowl crew hustles to prep for 2012 event in Indianapolis 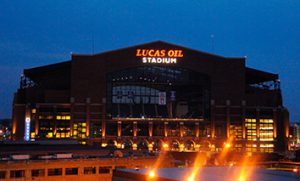 The Big Ten announced Thursday that the conference and the Indiana Sports Corp. will spend the next 30 days working out details
of the one-year deal. After that, the Big Ten will conduct thorough research to determine future locations.