The event is expected to include brief remarks from Indiana Gov. Eric Holcomb and Indianapolis Mayor Hogsett, as well as a wreath laying and moment of silence.

Dozens of tributes to Richard Lugar rolled in on Sunday as news spread of the death of the former Indianapolis mayor and U.S. senator from Indiana. 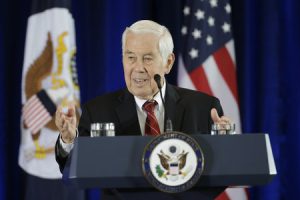 The Indianapolis native served two terms as mayor, orchestrating the unification of the city and the outlying parts of Marion County. He went on to serve 36 years in the U.S. Senate. 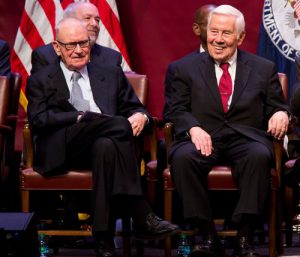 The announcement Wednesday afternoon kicked off a $25 million fundraising campaign, the proceeds of which will help establish a scholarship program and endowed faculty positions.

Fact check: Does Joe Donnelly vote with liberal Democrats 85 percent of the time?

Short answer: It depends which Democrat you compare him to. 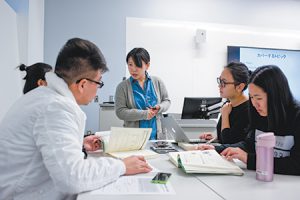 Enrollment at the school has grown 55 percent since its 2012 formation. Today, 631 undergraduates and 162 graduate students are enrolled, according to IU.

Former Sen. Richard Lugar won the Indiana Chamber of Commerce Government Leader of the Year award Tuesday night, even though the Republican was ousted from office in 2012.

Colleagues and friends say Lugar’s commitment to foreign policy, which earned him a Nobel Peace Prize nomination, and his belief in bipartisanship, which contributed to his thrashing by Tea Party favorite Richard Mourdock in the May primary, will be sorely missed when he leaves the Senate in January after 36 years.

Lugar is starting an internship program with the University of Indianapolis that will operate out of Washington, D.C. He has also agreed to deliver a handful of lectures each year as a distinguished professor at the private university.

A spokesman for Indiana Sen. Richard Lugar says the senator has been talking with some think tanks and universities about positions taking advantage of his long tenure as a leading member of the Senate’s Foreign Relations Committee.

Joe Donnelly did everything he could to wrap himself in the image of U.S. Sen. Richard Lugar while painting Richard Mourdock as a tea party extremist.

Mourdock keeps up fundraising after uproar over remark

The U.S. Senate candidate smiled and laughed while working the room at a private reception for Indiana Republicans.

The Republican and Democratic candidates stuck mostly to their talking points in their first debate last week and scored no knockout punches.

Suddenly gone is the strident rhetoric in which Mourdock proclaimed that bipartisanship meant Democrats coming over to Republicans' thinking and that winning meant he would "inflict my opinion on someone else."

Indiana’s Republican Party convention this weekend will mark a broad changing of the guard for the party that holds a firm grip on power at the Statehouse.

Without Sen. Richard Lugar, we might not have the Pacers.

Colleagues considered six-term Sen. Richard Lugar a visionary who looked beyond U.S. exuberance over the end of the Cold War and saw the dangers and opportunities in the collapse of a nuclear-armed Soviet Union.

U.S. Sen. Richard Lugar was ousted Tuesday by tea party-backed challenger Richard Mourdock in Indiana's Republican primary, abruptly ending the nearly four-decade career of a popular politician who built a reputation as a diplomat but whose critics argued had ceded too much ideological ground to represent a conservative state.