Home » BASILE: For an in-state outing, you can bank on Wabash

Wabash, southwest of Fort Wayne, has a population of only 12,000. But it also has four of our state’s 43 “attractions,”
according to my handy 2009 Indiana state tourist map. So instead of writing about some international location this time around,
I thought I’d rediscover something near home.

Over Memorial Day Weekend, my wife and I stayed at a 30-room, four-star boutique hotel, the Charley Creek Inn, in the historic
downtown district. Originally opened in 1920 at an estimated cost of $250,000 (including furnishings), the hotel was completely
refurbished, keeping its Georgian Revival style architecture, and reopened in January. 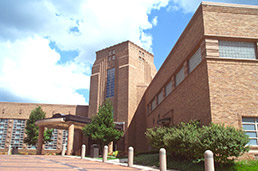 The Art Deco-style Honeywell Center in Wabash is on the National Register of Historic Places. (Photo Courtesy Wabash
County Convention and Visitors Bureau)

The first thing you see when you enter the hotel is the three-story atrium painted by an excellent Indiana artist, Rick Fischer.
The hotel contains a state-of-the-art green rooftop garden and party room known as The Cloud Club, which overlooks the historic
architecture of downtown. The hotel houses the third Hoosier Salon art gallery in the state as well as a wine and cheese shop
and a chocolate and ice cream shop, all of which we sampled and enjoyed.

The hotel’s Twenty Restaurant gets its name from the 1920s motif, including period photographs and paintings along
with a collage of Hoagy Carmichael and Cole Porter overlooking a Steinway grand piano in the elegant but cozy bar. While we
were dining, we were pleasantly relaxed with music from the Great American Songbook. And the food was excellent.

Another fine restaurant downtown is Market Street Grill, listed in our much-thumbed copy of “Dining Secrets of Indiana.”
Its two specialties are “drunk’in chicken” and barbecued ribs. The brick walls showcase antiques, which
create a nice backdrop for the electric train that travels throughout the restaurant.

One of the four attractions listed on our map is the Art Deco-style Honeywell Center, built in the 1940s by Wabash native
and town benefactor, Mark Honeywell, co-founder of Honeywell Inc. Listed on the National Register of Historic Places, it contains
a large outdoor activity plaza with sculpture, art gallery, gym, roller skating rink, restaurant and a room that partially
replicates Honeywell’s 1930s yacht, the Olivette, named for his first wife, Olive.

The gem of this complex is the 1,500-seat Ford Theater, with an eight-story-high stage house, orchestra lift, balcony, outstanding
acoustics, and computerized sound and lighting systems. Two days before our visit, the Four Seasons performed there to a sold-out
audience. The first entertainer to perform in the theater after it was built in 1994 was the country singer Crystal Gayle,
who grew up in Wabash. The Indianapolis Symphony Orchestra will be making an appearance in September, with Dance Kaleidoscope,
Mannheim Steamroller and many more later in the season.

The map’s second attraction is the Dr. James Ford Historic 19th century Home, with Victorian flower, medicinal and
vegetable gardens, and stone barn. Ford and family occupied the house for much of the 19th century, including the Civil War
years. Elegantly furnished in period pieces, it includes his surgical equipment and some interactive exhibits. Dr. Ford was
a talented amateur architect, medical doctor, pharmacist, writer, agronomist, inventor and Civil War surgeon. Great-grandson
Richard Ford, chairman of the foundation that owns and maintains the home, still lives in Wabash and is a major benefactor
for the town.

The third attraction is the Charley Creek Gardens, a not-for-profit horticulture center dedicated to the study, conservation
and appreciation of plants, both native and foreign, through garden displays, education and research. It contains a resource
center, greenhouse, an evergreen maze, a stone labyrinth designed for meditation, and a waterfall alongside Charley Creek.
People can stroll through the meadow on the 1/4-mile footpath and enjoy the gardens 365 days a year free of charge.

The fourth attraction is the Wabash County Historical Museum, which is in an 1895 building and contains two floors of interactive
exhibits. It is an affiliate “local history partner” of the Indiana Historical Society. People who have seen many
county museums call this the best in the state. I would agree. A 32-seat theater shows a custom-produced documentary about
the county and sets the stage for the rest of the tour through the museum.

You can even throw the switch to light the county courthouse that made Wabash the first electrically lighted city in the
world. This occurred on March 31, 1880, when light radiated from four arc lamps that were temporarily attached to the top
of the courthouse dome. One of the first electric lights is displayed in the lobby.

The dominating feature of the Italian-Renaissance-style Wabash County Courthouse is the domed clock tower. An impressive
monument to Lincoln, “Great Emancipator” was created by a master sculptor and sits on the expansive courthouse
lawn. It was donated by a Wabash native.

Downtown Wabash was named a Nationally Accredited Main Street Community by Indiana Main Street and the National Trust for
Historic Preservation. Membership in WMI includes Indiana Landmarks affiliation, recognizing the fact that rehabilitation
of historic buildings and managing design improvements are critical to a city’s economic and aesthetic development.

One of the most popular stores is Modoc’s Market, named after “the most famous elephant in America.” Briefly,
the story is that this elephant, named Modoc, escaped from the Great American Circus on Nov. 11, 1942, while the circus was
in town to stage an Armistice Day fundraiser. She charged through downtown Wabash, causing all kinds of havoc for the next
five days until finally recaptured.

Located on a prominent corner, Modoc’s contains an espresso coffee bar, homemade candies, baked goods and snacks, along
with a small convenience grocery store. Naturally, Modoc’s has a great collection of rather large elephants inside and
out.

The next time you have two or three free days and want to take a short, enjoyable and informative trip, you might consider
Wabash, just one of many interesting destinations in our own back yard throughout our great state.•

Basile is an author, professional speaker, philanthropist, community volunteer and retired executive of the Gene B. Glick
Co. His column appears whenever there’s a fifth Monday in the month. Basile can be reached at Frank_Basile@sbcglobal.net.