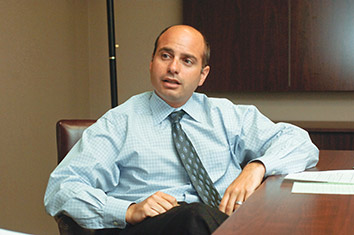 A recycling company is asking a judge to force Marion County Prosecutor Carl Brizzi to return more than $277,000 it says was seized as part of a trumped-up investigation.

The Indianapolis Star reported Saturday that the money was seized during raids on six scrap yards in February 2009 as part of a grand jury probe into allegations the company knowingly bought stolen metal. Omnisource contends that the probe was a sham aimed at raising Brizzi's political profile.

"After almost 20 months it has become clear that this action by the prosecutor has never really been about a legitimate concern about metal theft in Marion County or about a desire for accuracy or justice," OmniSource President Mark Millett said in a news release.

"It has become quite apparent that the prosecutor's real motivation was about headlines and a money grab, threatening OmniSource with forfeiture of all of OmniSource's Indianapolis facilities," Millett said.

Omnisource also alleges Brizzi illegally hired Indianapolis attorney Greg Garrison to oversee the forfeiture and paid him a portion of the funds. The lawsuit claims Garrison could have potentially earned millions of dollars if the company was forced to forfeit all its facilities in Marion and Hendricks counties, as Garrison allegedly threatened.

The lawsuit, which accuses Brizzi and Garrison of illegal and unethical conduct, is the latest in a series of reports scrutinizing Brizzi's dealings as prosecutor.

Brizzi's campaign finance chairman in 2006 was Timothy Durham, an Indianapolis businessman and major Republican donor who faced accusations that his companies were involved in a Ponzi scheme to defraud investors. The FBI raided the offices of two of those companies, Ohio-based Fair Financial and Indianapolis-based Obsidian Enterprises, but it hasn't led to any criminal charges.

Brizzi has defended himself against criticism of his associations with Durham.

His office also denied reports that campaign donations from the father of a woman convicted in a plot to kill her husband influenced a decision to cut decades from her sentence.

Brizzi resisted calls to resign after an IBJ investigation raised questions about his business dealings while in office and whether those deals influenced his actions as prosecutor—including his decision to return $10,000 in cash seized from an alleged drug dealer.

The Republican has said he won't seek a third term.