The fortunes of Indiana’s 12 ethanol plants, and the farmers and truckers who supply the corn to make the motor fuel additive, hinge on two decisions facing Congress and federal regulators in the weeks ahead.

One is whether to authorize the sale of gasoline containing higher concentrations of ethanol. Last month, the Environmental Protection Agency approved a bump to 15-percent ethanol in ordinary gasoline from the current 10 percent for vehicles from the 2007 model year and newer.

But the move was more symbolic than anything, as virtually no retailers are willing to install pumps, tanks and hoses to dispense E15 for less than 20 percent of the vehicles on the road. 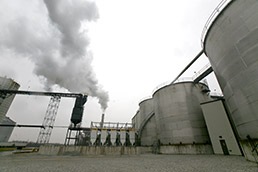 The EPA could rule by year-end on whether to OK the use of E15 in older cars, which could justify fuel retailers’ infrastructure investments and ultimately boost ethanol demand.

The other, potentially more significant, issue is whether to extend or gradually phase out a 45-cent-per-gallon tax credit to oil companies and refiners to blend the ethanol with gasoline. If the credit isn’t extended by Dec. 31, trouble could be ahead for some of Indiana’s ethanol plants.

“If this tax credit is not renewed, it likely would have a negative impact on the price of ethanol and demand for ethanol in the marketplace … it could negatively impact our profitability,” Union City-based Cardinal Ethanol warned in its most recent financial statement.

Indiana came to the ethanol business late. The industry boomed in the ’90s in the western corn belt, where corn is cheaper, then arrived in Indiana in a big way in the middle of the past decade as petroleum companies looked for a substitute for the anti-knock additive methyl tert-butyl ether, which was banned after being found in groundwater. As a result, much Indiana ethanol is shipped to the East Coast to be blended with gasoline.

Ethanol’s rap has been that it contains less energy than a comparable amount of ordinary gasoline, meaning it’s not cost-effective for motorists unless ethanol is priced substantially cheaper per gallon than gasoline.

Proponents argue that ethanol reduces dependence on foreign oil, provides jobs and will become more viable as scientific advances make it possible to distill it from ordinary grasses and plant matter at lower cost.

Iowa, Illinois, Nebraska, Minnesota, South Dakota and Indiana will suffer the most job loss if the tax credit is allowed to expire, according to a study by Entrix, a Delaware consulting firm. Indiana could lose more than 6,700 direct and indirect jobs, according to the firm. 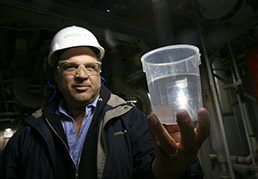 That number might be dubious, however, given that each of Indiana’s ethanol plants employs roughly 40 people—or about 500 statewide. It’s hard to imagine that indirect job losses affecting farmers, truckers and suppliers would account for the rest.

Entrix, along with the Renewable Fuels Association, an ethanol industry group,

estimates the credit’s lapse could reduce

Indiana’s $1.3 billion ethanol industry has capacity to produce 938 million gallons, according to the Indiana State Department of Agriculture.

Others don’t anticipate the industry being hurt as badly if the tax credit—and a 51-cent tariff on foreign ethanol imports—are left to expire this year.

A recent report from the Food and Agricultural Policy Research Institute at the University of Missouri projected that the loss of the credit and elimination of import tariffs could reduce U.S. ethanol production 1.4 billion gallons in 2011-2012 and 3.6 billion gallons in 2019-2020—at least 10 percent.

Still, the report said: “If the ethanol tax credit and tariff expire as scheduled … there would be less incentive to produce ethanol.”

Farmers would not only supply less corn, but also earn less from what they did grow. Corn prices could drop 15 cents a bushel, it said.

The biofuels industry has become an important customer for Indiana’s farmers. About 20 percent of the corn produced in the state now goes toward ethanol production, said Mark Henderson, executive director of the Indiana Corn Marketing Council.

The pending expiration of the tax credit has set off alarm bells at the National Corn Growers Association, the American Farm Bureau Federation and the biofuels trade group Renewable Fuels Association. They want the credit extended by Congress for at least five more years.

So far, they have on their side the Obama administration, which favors extending the tax credit.

Divided on a solution

Friends of the Earth and 18 other groups this summer rallied the House Committee on Ways and Means to let the credit lapse, arguing that demand for corn to make ethanol has resulted in rising food prices and shortages.

The group contends the 2007 Renewable Fuels Standard requires oil companies to purchase rising levels of ethanol to blend into gasoline over the next several years—making the tax credit unnecessary.

Allowing the credit to expire would neither decrease overall ethanol consumption nor reduce jobs in ethanol production, the groups say.

Wally Tyner, a Purdue University agricultural economist, said political leaders may be on the verge of an agreement toend the credit paid to fuel blenders over a one-year period.

One scenario is to reduce the credit to 36 cents a gallon from the current 45 cents, he said, with a phaseout perhaps in one year. Another idea is to create a producer tax credit paid directly to ethanol producers, instead, for four years.

Some support for a phaseout of the credit comes, ironically enough, from the ethanol industry.

Growth Energy, a group of ethanol producers making strides toward distilling ethanol from cellulosic material—less-expensive grass and leftover parts of the corn plant—proposes phasing out the tax credit. One Growth Energy member is South Dakota-based Poet LLC, which has several plants in Indiana.

Federal money instead would be redirected to building out distribution infrastructure, such as tax credits for retailers to install 200,000 “blender pumps” that could dispense a variety of ethanol concentrations consumers could choose.

Money could also flow toward federal loan guarantees for ethanol pipelines to metro areas outside the farm belt with less access to ethanol.

Moreover, Growth Energy’s plan would require all automobiles sold in the United States to be flex-fuel vehicles capable of burning higher concentrations of ethanol.

“Its very essence is about creating the investments in infrastructure,” Rob Skjonsberg, Poet senior vice president of public policy, said of the Growth Energy plan.

If Congress is not ready to take on something akin to Growth Energy’s comprehensive plan in the next several weeks, a short-term extension of the current tax credit might be necessary this year, Poet’s Skjonsberg added.

Infrastructure inarguably is a prerequisite to increased ethanol use. Without it, not even the EPA’s OK last month of E15 for newer cars will cause greater consumption.

“I am not aware of any retailer who has pursued E15 since that announcement,” said Jeff Lenard, a vice president of the National Association for Convenience and Petroleum Retailers.

“The bottom line is, the approval of E15 for cars 2007 and newer is dead on arrival,” said Purdue’s Tyner. “The EPA has said they may approve it for cars 2001 and newer by the end of December. That has a greater chance of taking hold in some places, but still is a segmented market and not clear what stations would do.”

In fact, the gas station group recently warned retailers to exercise “extreme caution” when considering whether to sell E15. It said retailers could be liable if pumping equipment is not certified to dispense E15. They could also be liable for violations of local, state and federal air pollution laws if a motorist puts E15 in a vehicle built before 2007—as well as for any damage to vehicles.

“Frankly, our store managers are not equipped to police what vehicle pulls up to an E15 pump,” said Jim Gentry, director of fuel purchasing at Greenfield-based Gas America.

At least a dozen of the convenience and gasoline chain’s stores already sell E85, a mixture of 85 percent ethanol and 15 percent gasoline, so it’s not averse to biofuels. Its ordinary gasoline contains up to 10 percent ethanol. But Gas America Services Inc. isn’t ready to invest in blender pumps, special tanks and hoses capable of dispensing E15, he said.

“Our position is, it’s a work in progress as far as getting E15 to the marketplace,” Gentry said. “If E15 becomes the norm in the marketplace, that’s certainly the direction we will go.”

Poet hopes the EPA by year-end will approve E15 for cars of model year 2001 and newer.

If the agency gives the green light for models as far back as 2001, that would cover about 54 percent of cars now on the road, said Skjonsberg.•