Indianapolis Power & Light says beginning next March it will stop offering to buy electricity from customers who generate it from renewable sources—a blow to advocates of wind, solar and other clean forms of energy. 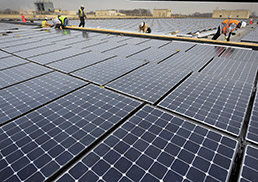 The utility’s 3-year-old Renewable Energy Production program, or REP, expires next March 30. Proponents of renewable energy, who’d praised IPL for creating the program, in recent months implored the utility to extend and expand it.

So far, IPL has agreed to purchase 2.2 megawatts of power generated by a handful of customers under contracts of up to 15 years. IPL estimates it will pay about $567,000 for that power. IPL will continue to purchase power for the remaining terms of existing contracts and under terms of contracts written before the program ends in March.

Projects providing another 30 megawatts are pending, including a 10-megawatt solar farm slated to be built this summer at Indianapolis International Airport.

An additional 30 megawatts will be obtained through a “reverse auction,” which favors the applicant offering to sell power to the utility at the least unit cost.

IPL said it already has contracts to purchase 300 megawatts of electricity generated by utility-scale wind farms to promote clean energy and as a hedge against high costs that might result from a federally mandated renewable energy program in the future.

“However, in the current energy environment, increasing the amount of renewable energy, which now costs more than traditional forms of generation, must be balanced against other expected cost increases such as those necessary to comply with Environmental Protection Agency mandates.”

IPL said earlier this year it may have to spend upward of $900 million to equip its power plants with scrubbers to reduce harmful emissions.

IPL’s ratepayers will pay for those upgrades through higher electric bills.

The utility also cited rising costs for photovoltaic solar panels, in part due to higher levies on panels from China, and the phaseout of federal tax incentives for renewable projects.

Thus, customers proposing renewable energy projects might find their costs rising unless IPL pays them more for power under the long-term contract.

IPL ratepayers shoulder the cost of buying renewable power under the REP program, and paying more for power under the program would “put pressure on customers’ rates at a time when rates are expected to increase due to the new environmental compliance costs,” IPL wrote.

Finally, IPL told the commission the REP program has not generated the level of interest among customers that it originally expected.

IPL theorizes that part of the problem may be the economic downturn. The greatest interest has been from developers interested in creating projects that are eventually sold to third-party investors, the utility said.

Though many developers have sought to partner with IPL customers so they can qualify for the REP program, such projects are a “financial play” that benefits tax investors “and only marginally benefits host customers who do not always understand the obligations and risks that must be assumed as a result of such a partnership.”

It’s true that some of the projects are complicated. The airport’s solar farm, for example, is being constructed through a joint venture of three local firms: architectural/engineering firm Schmidt Associates, telecommunications services firm Telamon Corp. and Johnson-Melloh Solutions, a contractor involved in several renewable projects around the region.

The Indianapolis Airport Authority expects to collect $316,000 annually from the solar-farm partnership, which will feed all the solar panels’ output into IPL’s grid.

Many IPL customers simply will not embark on renewable projects unless they have the long-term financial assurances the REP program provides, said Laura Arnold, president of the Indiana Distributed Energy Alliance, who said she’s disappointed in IPL’s decision.

“Even when the customer wants to do this, they often don’t have the cash upfront” for the investment, she said. “There’s not going to be as much interest” now.

“The idea of just abandoning the program—a program that had so much interest—is clearly wrongheaded,” said Dave Menzer, who heads the Sierra Club’s “Beyond Coal” campaign in Indiana.

If anything, Menzer said, renewable power now looks more cost-effective when factoring-in the hundreds of millions of dollars IPL will need to spend on additional pollution controls on its coal plants.

Those costs will soar further for future carbon dioxide emission caps, he added.

On the other hand, some industry critics say a utility can generate a higher rate of return on a conventionally fueled power plant and that such a prospect is foremost in the minds of investor-owned utilities.

To that extent, IPL is looking to add additional generation in the form of natural-gas-fueled plants. Late last month, the subsidiary of Virginia-based AES Corp. issued a request for proposals for 600 megawatts of gas-fired generation, starting in 2017.

Such generation could replace a like amount of existing coal-fired generation at its Eagle Valley plant in Martinsville or its Harding Street facility.

IPL said it’s evaluating whether to build a natural gas unit in the Indianapolis area, as well as considering whether to buy existing power plants “or some combination of these options.”

IPL’s so-called net metering program will continue. Under net metering, IPL issues a credit on the bills of customers who generate excess power each month through renewable sources, up to 1 megawatt.•