A Michigan-based bar chain specializing in craft beers on tap plans to open a $2.5 million location in the heart of Broad Ripple.

Called HopCat, the bar will anchor the long-vacant corner space in the Broad Ripple parking garage on the southwest corner of College and Broad Ripple avenues. It will be HopCat's third location and its first outside Michigan. 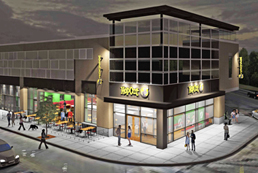 The bar and eatery will help fill remaining retail space in the Broad Ripple parking garage, which opened in May 2013. (Image courtesy HopCat)

The owner claims that its 130 craft beers on tap will make it the city's largest beer bar. It will offer seasonal outdoor seating along College Avenue and a keg storage room with windows on the street to show the complex logistics of switching out hundreds of kegs during business hours.

“Broad Ripple’s history as a place with an artistic heart and musical soul made it the ideal area for us to open our first HopCat outside of Michigan,” said Mark Sellers,  founder of HopCat, in a prepared statement. “We also look forward to showcasing the liquid art being produced by Indiana’s brewers. ”

HopCat is expected to open in early August, pending approval by local and state officials.

Opponents argued the area is oversaturated with watering holes and instead needs more retail businesses. They also feared the additional bar would increase demands on the neighborhood's limited parking. The restaurant cleared regulatory hurdles in late 2011 and opened soon after.

The $16 million, 350-space parking garage opened in May 2013. It initially was slow to add tenants in its street-level retail spaces.