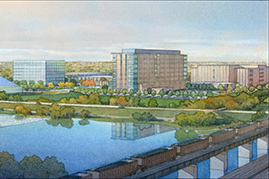 The city of Indianapolis will pay Paris-based WMB Heartland Justice Partners $1.6 billion over 35 years for a new justice center.

Mayor Greg Ballard on Friday morning introduced WMB Heartland as the winning bidder for the public-private partnership deal, which is only the second so-called “P3” deal for a non-transportation facility in the United States.

“We’re happy to have you as partners for the next few years—quite a few years, actually,” Ballard said.

The courthouse and jail, slated to be built at the site of the former GM stamping plant west of downtown, will cost an estimated $408 million, lower than the original estimates of $500 million to $700 million, the city said.

The city will be required to pay WMB Heartland $46.8 million annually starting in 2019, the first full year of operations. Those payments will continue for the 35-year length of the contract .

The complex with consist of three main buildings, including a courtyhouse. (Image courtesy City of Indianapolis)

The city said the annual payment is an estimated $3.2 million less than what Indianapolis and Marion County currently pay for various courts, jails and other criminal-justice facilities.

IBJ reported last month that the city intended to pay no more than $50 million a year over 35 years, or a maximum total of $1.8 billion, for the facility. The city said it arrived at the $50 million figure to ensure the project can be funded within justice agencies’ budgets.

In terms of present value, the 35-year deal is worth $717.7 million, the city estimated.

Ballard said all three bids the city received were qualifying bids, but spokesman Marc Lotter said he could not confirm whether the two losing bids were also under the $50 million threshold.

Information about the other bids will be released before the administration appears before the Public Safety Board and council, Lotter said. Those meetings are expected early next year.

Meridiam was the sole developer of the first so-called “social infrastructure” P3 in the United States, Long Beach Courthouse.

Walsh Group has a major presence in Indiana, where it’s building and investing in the East End Crossing of the Ohio River Bridges.

The other finalists were as follows:

Marion County Sheriff John Layton said the facility proposed by WMB will be the “face of justice.”

WMB proposed three separate buildings – a courthouse, jail and community corrections, which is an alternative to lockup.

The plan calls for 28 new courtrooms and 10 hearing rooms accommodating 15 jury criminal courts and a traffic court. WMB’s proposal would allow for the potential relocation of civil courts in the future.

The jail would have 3,000 beds – 1,760 for men, 568 for women, and 640 for special needs. The facility would have an integrated intake and processing center, a medical unit with 24 infirmary beds, and a state-of-the-art kitchen.

Community corrections would have 768 beds for men, 192 beds for women, and an unspecified number of specialized beds. There would be expanded space for day reporting and electronic monitoring.

The new jail would expand capacity, which Layton said has been at near-maximum levels. The sheriff has not asked judges for permission to release inmates because of a lack of space since 2006, he said, and he doesn’t want to see that happen again.

At the same time, Layton said, he wants to keep inmates from re-offending. The new facility will have space for the sheriff to administer high-school equivalency classes and other education programs. “Maybe, maybe they don’t have to knock off that liquor store on a Friday night,” he said. “They can go home and create some art.”

Ballard has said building a new courthouse and jail is a top priority for his final year in office. Judges and the legal community have wanted to separate the court system from the City-County Building for two decades, and Ballard said the city has been lucky to avoid a serious incident.

On Thursday, sheriff’s deputies chased a man who was trying to avoid arrest on a warrant onto the second floor, where he hid in a City-County Council committee room, Ballard said.