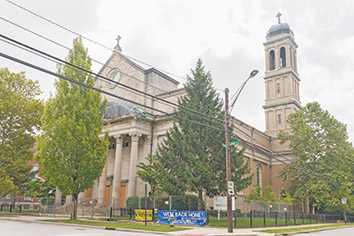 The 136-foot bell tower soaring over the Church of the Holy Cross cements the historic building’s standing as a neighborhood landmark.

But the 1922 structure at the southeast corner of Ohio and Oriental streets, less than two blocks from busy East Washington Street and the burgeoning Angie’s List Inc. headquarters campus, is starting to crumble. In March, the archway above the entrance crashed onto the sidewalk and street below. Engineering studies estimate repairs to the entire building would cost at least $1.5 million—money the parish doesn’t have.

Church officials are contemplating whether to try to raise the money for fixes or consider selling the property for possible redevelopment.

“There are just a lot of questions at this point about what’s going to happen to that building,” said Greg Otolski, director of communications for the Archdiocese of Indianapolis.

It’s a dilemma an increasing number of parishes are facing as their churches age. Similar angst is playing out at St. John United Church of Christ in Cumberland, which narrowly averted the wrecking ball last month, and at other congregations—especially in older parts of Indianapolis—where aging members lack the financial wherewithal to keep up with escalating repair and maintenance costs.

What makes the decision even tougher is that the religious structures often are considered architectural gems that stir deep emotions.

“In most communities, they’re landmarks,” said Jim Kienle, an architect at the Indianapolis office of Moody Nolan Inc. who specializes in historic preservation. “They’re just real important pillars to the community.”

Irish immigrants founded the Holy Cross parish in 1895. Members built on the current site nearly a century ago.

The parish has suffered in recent years. Holy Cross’ dwindling membership prompted the Archdiocese of Indianapolis in November to fold operations into nearby St. Philip Neri on North Rural Street, which now is responsible for the church’s upkeep.

Whether church leaders elect to save Holy Cross is unclear. Its future should be more certain following a series of planned town-hall-style meetings.

The architectural importance of aging church buildings is not lost on the federal government. For the first time, some religious properties became eligible this year to apply for assistance through the Historic Preservation Fund grant program.

Religious properties must already be listed in the National Register of Historic Places and can receive up to $50,000 on a dollar-for-dollar match.

“It’s been a concern for the National Trust for a long time—saving these things from demolition and losing these cultural assets,” Kienle said. 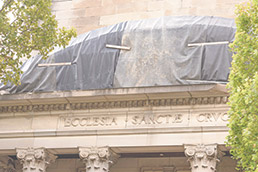 The archway over the entrance of the Church of the Holy Cross collapsed in March, prompting church officials to ponder the fate of the nearly century-old building. (IBJ photo/Eric Learned)

St. John United Church of Christ in Cumberland, at East Washington Street and German Church Road, is in a similarly urgent predicament. Its fate has been uncertain since Pittsburgh-based Giant Eagle Inc. dropped plans last month to raze the building and build a gas station and convenience store on the property.

Although Giant Eagle received rezoning approval from the city of Indianapolis, the supermarket chain faced fierce opposition from Cumberland residents and preservationists who opposed the demolition.

Caught in the middle is St. John’s parish, which plans to build a new church with sale proceeds on nearby donated land and doesn’t have the $750,000 to make repairs to the existing 1914 building.

Cumberland officials opposed Giant Eagle’s plans and envision a greater use for the site than a gas station and convenience store. To help generate interest in saving the building, they now might be willing to offer tax incentives—ideally for a mixed-use development.

“That’s been a church since the town was first platted—not this particular structure, but there’s been a church on that property for 150 years,” Town Manager Andrew Klinger said. “It’s become entrenched as sort of a cultural icon.”

The original church on the site served German immigrants and opened in 1855. The current Tudor Gothic Revival building replaced that structure.

The Rev. Jimmy Watson, the congregation’s temporary pastor, understands the community’s emotional attachment. But the uncertainty has put the church in a bind. It has constructed a pole barn a couple of miles away on land at the corner of East Prospect Street and Carroll Road to worship in until a permanent church is built.

He is eager for another buyer to come forward.

“The frightening thing is that we could be worshipping in a barn for a long time,” Watson said.

Indiana Landmarks is inviting the public on Aug. 27 to tour the vacant Beth-El Temple near East 34th Street and Central Avenue and offer suggestions on how it should be redeveloped. The preservationist group purchased the building in a tax sale in February 2014.

Indiana Landmarks itself operates from a former church. The not-for-profit bought the old Central Avenue Methodist Church at 12th Street and Central, and undertook a massive renovation that it finished in 2012.

The church, built in 1891, housed the largest Methodist congregation in Indiana. Population shifts forced the church’s closing in 1999, when membership had fallen below 30.

But that came only after the local developer tried to demolish the 1905 structure, quietly seeking a demolition permit for the entire building. When the application came to light, and opposition to demolition mounted, Hearthview switched to plan B.

Perhaps the most intriguing conversion of a church building is the St. Joseph Brewery & Public House at 540 N. College Ave., which opened in May.

Owners of Chatham Tap Restaurant & Pub and Ralston’s Draft House on Massachusetts Avenue bought the 1879 building that last housed an architectural firm and renovated it for the microbrewery.

Restaurants and entertainment venues, along with condominiums, are the most prevalent reuses for church buildings, Kienle at Moody Nolan said.

But someday the architectural icons will become much scarcer, Otolski at the archdiocese predicted.

“You couldn’t build them like that today,” he said, “because it would cost too much.”•