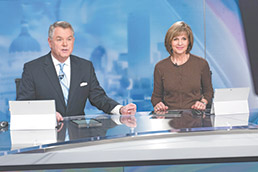 Through the ups and downs of a nearly four-decade TV news career, one thing has kept Debby Knox charging forward: the adrenaline rush of breaking news. So when WTTV announced in August 2014—eight months after Knox stepped down as WISH-TV Channel 8’s longtime nighttime news anchor—that it would broadcast local news when it gained the CBS affiliation in January 2015, the 61-year-old didn’t hesitate to jump back into the fire.

Why did you leave WISH?

I was at WISH-TV for 33 years and that’s a long time in this business. I was physically tired and I thought I had served my time and had accomplished a lot while I was there. So I wanted to go.

Why did you come back on air with WTTV?

By the time the [CBS affiliation switch was announced], I had almost eight months off. That’s almost like a sabbatical. It had given me enough time and I was thinking about what was the next thing I was going to do. I did not plan to come back into TV. There wasn’t any place for me, really. And then when the [switch was announced] … I began to think and began to talk to folks here and thought this would be a nice place for me and this would be a nice time to come back.

Did WTTV approach you or did you approach them?

I talked with some people here casually and the casual conversations led to them asking me if I’d like to talk to the news director, and I said, “Yes, I would like to have that conversation.”

Was it an easy decision to come back full time?

What was it like starting at a new station after so many years at WISH?

They had to ramp up and hire a lot of people in a short period of time and build a whole new studio. It is historic in this business to make this kind of switch and to get a second chance in the anchoring position. It was exciting.

How is your role at WTTV, essentially a startup, different than what it was at WISH?

The biggest change is, I have so much experience coming in. I know the news business really well and that helps from a confidence level. I know what it takes to get going and all that helps build an audience.

Do you feel like you are more of a mentor or teacher here?

I could be that. And I would like to be that. But I’m also very respectful of the leadership here and the established staff here.

What did you miss most about your job in the time you were off the air?

Breaking news. That’s an adrenaline rush. When I would be home watching, I’d be thinking, “I’d like to be a part of that. Come on.”

Who is your professional role model?

A woman who just passed away recently, Marlene Sanders. She worked for ABC and did some documentaries. I got to spend a day with her when I was in college. She’s a sharp lady.

Do you feel like a role model to others in your profession?

I guess. That’s embarrassing. I feel like everyone finds their own way and they have their life experiences that form them.

How long do you want to continue to work?

I don’t know. I really like what I’m doing. I came to work an hour and a half early today because I just wanted to get here. I feel rejuvenated and re-energized. I like this place. It’s exciting to be here.

Do you even ponder retirement?

What’s the most enjoyable interview you ever conducted?

What’s the most difficult interview you ever conducted?

Mikhail Gorbachev. He was a good friend of Diane Simon, Herb Simon’s former wife. I knew Diane and she helped set up the interview in Beverly Hills and I didn’t get him. It was a fiasco.

Then he came to Indianapolis because of Diane Simon and I got access to him at The Canterbury Hotel. I finally get this interview, I sit down with him, and I know he can speak English, and he won’t speak English. He had a translator and it was very slow. It was so boring it almost put me to sleep.

Tell me something surprising about yourself people—even your most loyal followers/TV viewers—don’t know?

I dead-lifted 185 pounds … at a power-lifting contest back in November.