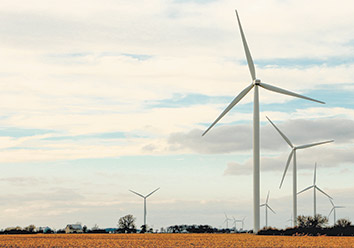 But there is a growing sentiment here among key energy leaders—even from those who oppose the EPA plan—that while Indiana is fighting the rule in court, the state should develop its own compliance plan that focuses on realistic strategies to decrease carbon emissions and diversify its energy mix.

They say it beats being a slave to the federal rules—should they be upheld—that weren’t written with Indiana in mind. Twenty-four states have sued to stop the new rules.

“History has tended to say that a state plan is more applicable and tailored to Indiana,” said Mark Maassel, president of the Indiana Energy Association, which represents the state’s investor-owned utilities.

MORE FROM IBJ
Despite an increase in renewable energy usage in recent years, Indiana is still generates 80% of its energy from coal.

“We certainly are expressing to people we should litigate,” he said, “and that we need to develop a state plan on the chance that it is upheld.”

The holdup: Gov. Mike Pence. The Republican is charged with the final decision about whether the state prepares its own plan or simply takes a chance that the federal rules will be struck down.

But Pence hasn’t yet decided how to act.

“The governor has not made a final decision about whether to submit a state plan in compliance with the Clean Power Plan,” said spokeswoman Kara Brooks. “As he weighs this decision, he is meeting with stakeholders to hear their reasons for and against submitting a plan.”

Meanwhile, Indiana groups say they are eager to get to work soon so Indiana has enough time to develop a meaningful plan that addresses environmental issues while taking into account what’s best for the state’s economy.

Pence has directed state agencies, including the Indiana Department of Environmental Management, to work with the Governor’s Office to help him understand the state’s options, Brooks said.

The EPA has directed states to submit compliance plans or request extensions by next year in its goal to reduce carbon dioxide emissions 32 percent by 2030.

President Obama and other proponents say the EPA plan will provide public health benefits, spur investment in clean energy, and create thousands of jobs. Opponents say the plan will be costly to implement, especially in states like Indiana where the majority of the state’s electricity generation comes from coal.

Coal-fired electric power plants in July provided around 80 percent of the state’s net energy generation, according to the U.S. Energy Information Administration, compared to about 35 percent nationally.

The Indiana Municipal Power Agency, a not-for-profit wholesaler power provider to about 60 Indiana cities, “does support a state plan—but only over having a federal plan forced upon us if the Clean Power Plan survives the legal challenges,” said spokeswoman Niki Dick.

Indiana Coal Council President Bruce Stevens said the state should request an extension from the EPA to investigate the economic impact on Indiana of reducing the use of coal. The state estimates the mining industry supports about 3,600 jobs here.

The Governor’s Office said it is still considering whether to ask for an extension. The state has until next September to make the request.

“It is too early to determine what our course of action will be,” Brooks said.

Until then, environmental groups say they will keep trying to convince the General Assembly to act pragmatically and put pressure on the governor to develop a state plan.

Pence said in a press release last month that fighting the EPA rule in lawsuits is “another step in fighting back against the Obama Administration’s war on coal.” He told reporters earlier this year the plan was Obama trying to “address a climate agenda through a regulatory state.”

But his likely opponent in the 2016 governor’s race, Democrat John Gregg, said Indiana needs to be proactive about the issue.

“Rather than banking on a successful outcome of a lawsuit and risk a federal takeover of this process, I would have taken an approach similar to what Gov. [Steve] Beshear did in Kentucky—a state that is heavily dependent on coal,” Gregg told IBJ in an email. “He didn’t sue out of the gate. He sat down with stakeholders and the EPA and worked up a state plan that provided a longer transition period for their industry that preserves jobs and still meets the environmental goals over time.”

But in Indiana, energy groups are having a hard time convincing even Democrats to work on a state plan. Activists said they were surprised when U.S. Sen. Joe Donnelly came out against the Clean Power Plan. He said the feds “had an opportunity to encourage Indiana to continue to innovate and diversify our energy portfolio in a way that was good for our environment and economy, but the EPA missed the mark.”

Environmental groups in the state say Indiana has a “moral obligation” to address climate change and that, by embracing cleaner energy, the state could spark the growth of a new industry here.

“Let’s start looking at the [EPA] plan as an opportunity, not as a liability, for the state to think hard about how we develop state-level policies that will accelerate the development of Indiana’s clean energy sector,” said Jesse Kharbanda, executive director of the Hoosier Environmental Council.

Perras said she understands the changes could have a serious impact on Indiana’s coal miners but that state leaders need to think long term about the coal industry. She said working on a state plan could start that discussion.

“It’s not a growth industry,” Perras said. “In other states, they’re having a dialogue around the fact that we owe coal miners a big debt for all they’ve done for our country. We want to make sure their families are taken care of and their kids can plan a future away from coal.”

The governors of Wyoming and North Dakota—both coal-dependent states—plan to challenge the EPA in court. But both men told Environment & Energy Publishing they were also developing “compliance plans for what they think they can achieve.”

“Eventually, we have to be able to put forward what we think is possible for the state of North Dakota, and we’re committed to carbon reduction as much as any other state,” Republican North Dakota Gov. Jack Dalrymple told the publication last month. “This is something we want to do, but we have to determine what is possible, what is even reasonably feasible.”

“It shouldn’t be a Republican versus Democrat issue. It really shouldn’t,” she said. “We’re willing to work with both sides. You have to admit you have a problem first. We haven’t done that in Indiana.”•