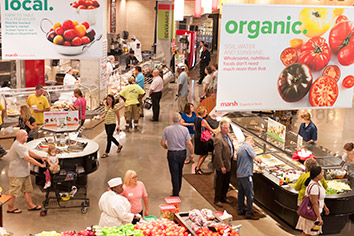 Fishers-based Marsh Supermarkets, which has been shrinking for years as grocery competition intensified, said Tuesday that it plans this year to “remodel and update” 30 of its 73 stores.

The company did not immediately provide details on which stores it would remodel or how much it would spend.

The renovation plans were contained in a press release announcing the closing of its West Third Street store in Bloomington.  The grocery chain said the store was underperforming and its lease was expiring.

Marsh has retrenched repeatedly since Florida-based Sun Capital Partners acquired it in 2006, reducing its store count from 116 to 73.

Meanwhile, Cincinnati-based Kroger Co. has bulked up its market share with a spending blitz. Kroger fired its latest salvo last April, announcing it plans to spend $465 million to expand and upgrade its Indianapolis store base—an unprecedented investment that is to include construction of 11 new stores and expansions or remodelings of 22 others.


Beyond Kroger, Marsh is facing competition from a dizzying array of new-to-the-market natural and organic food retailers, from Earth Fare to Fresh Thyme.

Marsh executives have talked from time to time about ramping up store openings. But the only new store in recent years was the 40,000-square-foot outpost it opened at Senate Avenue and Michigan Street in 2014.


In a statement to IBJ last May, Marsh CEO Tom O’Boyle said the chain had achieved “significant business improvements” since he came aboard in December 2012. “Today, we are in a great position to build on what has been a rapidly improving business,” he said.