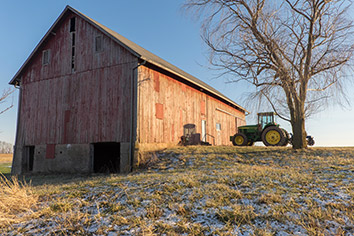 Farmers across Indiana would get a big property tax cut under legislation moving through the General Assembly that would reduce their assessed land values an estimated $4.2 billion for taxes paid in 2018 and $8.9 billion for 2019.

It’s the latest attempt by lawmakers to help farmers who say they’ve been squeezed by tighter margins because of higher taxes and lower profits. But the proposal also shifts the tax burden to other payers, meaning homeowners and businesses might pay more and local governments might get less.

“Farmers are dealing with increasing property taxes at the very same time they are seeing historical lows in commodity prices,” Hershman said. “It will have the impact of essentially flat-lining agricultural taxes for the foreseeable future, or decreasing them just slightly.”

“The farm economy, especially on the crop side, is very much in decline,” Hall said. “What we have wanted all along is stability and something that is more based on a [farmer’s] ability to pay.”

Just four years ago, in the aftermath of the worst drought since 1956, Midwest farmers were collecting record crop prices. Corn was priced at $8 a bushel since the nation’s corn yield was much smaller than normal.

That’s part of the problem. Since the base rate per acre of farmland—the starting point for property tax assessment—is calculated by factoring in a farm’s income in prior years, the base rates have spiked while farm income is actually on a downward trend. The base rate has more than doubled since 2007, resulting in a 47 percent increase in agricultural property taxes, according to Purdue University professor Larry DeBoer.

But U.S. farm incomes were expected to decline 36 percent in 2015, to the lowest level in nine years, according to the U.S. Department of Agriculture.

If there were no intervention, DeBoer said, “the base rate would go up for the rest of the decade, but as of 2014, corn and bean prices collapsed.”

George Kakasuleff, whose family farms 4,000 acres of corn and soybeans in Hamilton County, said the situation has caused him to cut corners in other areas of his business. 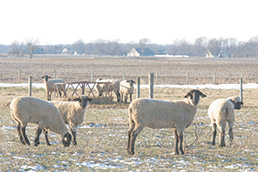 “That farm is requiring no additional services than it did four years ago,” Kakasuleff said. “But yet the property tax burden has gone up significantly.”

Jon Sparks, who farms 1,400 acres of corn and soybeans in Hancock and Shelby counties, said the situation is also tough for farmers who don’t own land but “cash-rent” instead.

“It puts us in a bad spot,” Sparks said. “If landowners are paying excessive property taxes, they’re not going to want to accept less in rent.”

Lawmakers attempted to fix the problem last year, with a unanimous vote by both houses on a bill to change the method to calculate the base rate.

Hall said that “stopped the bleeding.” But key players saw it as a temporary fix.

That formula, which would have reduced farmland taxes $250 million from 2016 to 2018, used a six-year average of Indiana non-farm personal income growth to help calculate the base rate. It would have resulted in the base rate’s increasing about 4 percent per year.

Hershman’s proposal would reduce farmers’ bills by again changing the base rate formula—this time setting a minimum 8 percent capitalization rate and using more recent financial data. The base assessment rate would drop from $2,310 per acre for taxes due in 2019 under current law to $1,630 per acre.

“It’s got the potential to make it more in line with what farm income is,” Wood said. “That would be the biggest help.”

But the changes would also hurt other classes of taxpayers.

“The reduction in assessed valuation will cause tax rates to increase, shifting taxes from farmland to all other property types,” said a report on the effects of the bill from the nonpartisan Legislative Services Agency. “The increased tax rates also will cause an increase in circuit breaker losses for taxing units in areas where circuit breakers have been triggered.” 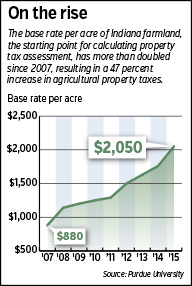 That means higher property taxes for everyone but farmers and less revenue for some local governments and schools.

Karl Berron, CEO of the Indiana Association of Realtors, said the change was “not ideal” for other taxpayers.

“It’s not a tax cut,” Berron said. “It’s a tax shift. I understand why the agricultural sector, like every other sector, wants some relief. You should be willing to pay for that relief with alternative taxes.”

Hershman said the tax relief is warranted because farmland uses fewer government services than other types of property.

“Think about a Walmart,” he said. “They need fire protection, police protection. Their employees have kids going to schools. Cornfields don’t need much of anything.”

Wood said paying property taxes isn’t fair to farmers for that reason. He said another method of taxation would be preferable.

“While it is certainly nice to have police and fire and a library to go to and quality schools in our area, corn and soybeans don’t really utilize those services,” Wood said. “I’m not getting as much bang for my buck as John Q. Homeowner.”•