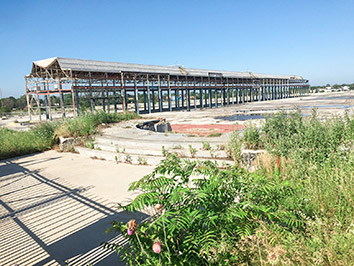 The entity tasked with marketing the former General Motors stamping plant site is moving quickly to get the 102-acre downtown property back on the market to capitalize on strong interest from prospective developers.

The land became available again after owner RACER Trust terminated its contract on June 21 with REI Investments, the Carmel-based developer that had planned to build an outdoor concert venue on about half the land but couldn’t secure financing.

The criminal justice project unraveled last summer amid City-County Council opposition, and that parcel went back on the market. But the lack of availability of the entire site dampened developer interest.

Now that the whole site is available, “there is intense interest in the property,” Bruce Rasher, RACER’s redevelopment manager, told IBJ. “I don’t want to be in a position to miss market timing because of the economy or access to capital markets that could change.”

Rasher plans to issue a call for offers before the end of the year.

RACER took title to the property in 2011 and is still searching for a buyer five years later. But the timing finally could be right for a developer to pitch something more transformative than what’s been presented so far, said Thomas Cook, Mayor Joe Hogsett’s chief of staff.

Cook pointed to Hendricks Commercial Properties’ proposal to build a $260 million project on 11 acres along Massachusetts and College avenues as an illustration of the strength of downtown’s commercial real estate market. The mammoth development would include 337 apartments, 400,000 square feet of office and retail space, a 132-room hotel, day care and movie theater, without financial incentives from the city.

“If that’s an indication of where downtown is on development, we’re really excited about the prospects,” Cook said. “There’s never been a better time to market that property.”

Of course, trendy Mass Ave is much more established than West Washington Street. The former stamping plant site sits across from the Indianapolis Zoo and is bounded to the west by industrial users.

Yet Cook said any project built there could serve as a catalyst for the area.

“I think we’re really encouraged by long-term prospects for development on the other side of the [White] River,” he said. “We’re not taking anything off the table.”

Support for building a neighborhood on the property has been percolating since at least 2011.

The site that year was the subject of an Urban Land Institute study that recommended a mixed-use, mixed-income development that could become an extension of downtown. The report also suggested a bridge across the river could create a landmark connection and entry point to downtown.

The neighborhood surrounding the site, known as The Valley, would welcome implementation of that vision. The Valley Neighborhood Association, founded out of opposition to the concert venue, favors amenities that will bring daily foot traffic, said Rahnae Napoleon, association president.

“The little guy usually doesn’t win,” she said. “We have a new reset button now.”

Not everyone, however, is convinced the sprawling property on the western edge of downtown is ready for urban development.

Tadd Miller, CEO of locally based Milhaus Development LLC, chairs the advisory board of the Urban Land Institute’s Indiana chapter. He was not involved in the 2011 ULI stamping plant report but said developers would have previously stepped up if they thought the market would support that vision.

“If it was ready to do that kind of deal, you would have had eight qualified bids coming in the door, and there wasn’t anything close to that,” Miller said.

RACER doesn’t make proposals available to the public. But in late 2013, sources said three local firms, besides REI Investments, were finalists to develop the property. They were Ambrose Property Group, Buckingham Cos. and Keystone Group.

REI won out, Miller believes, because it had the best shot at closing a deal. REI teamed with White River State Park, Live Nation and the zoo in its efforts to develop the concert venue.

The amphitheater would have replaced The Farm Bureau Insurance Lawn across Washington Street, operated by Live Nation, which uses temporary staging and provides temporary seating for about 5,000.

White River State Park would have needed financial backing for the project from the General Assembly. Without that commitment, the park lacked the capabilities to secure outside financing, REI President Mike Wells said.

RACER rejected the state’s offer for two reasons, Kenley said. The state didn’t have an economic development plan ready for the property and also declined to commit to the concert venue.

Kenley, Senate Appropriations chairman, in January proposed that the state buy the land and turn it into an expansion of White River State Park. Kenley told IBJ the state still hopes it can work out a deal with RACER and is not “dead set” on allocating the entire property to a park.

“We’re not giving up hope that we can still take the property and work together on a long-term plan,” Kenley said. “The state’s in a better position financially to carry the load right now.”

The zoo partnered with REI in hopes of getting access to the concert venue’s surface lot for overflow parking on its busiest days. Long term, the deal would have given the zoo a chance to expand its exhibits by building on part of its current surface lot.

Zoo leaders remain hopeful about an expansion and want to work with whoever develops the site.

“We are confident that all developers recognize the importance of supporting the zoo’s sustainability,” spokeswoman Judy Palermo said.•