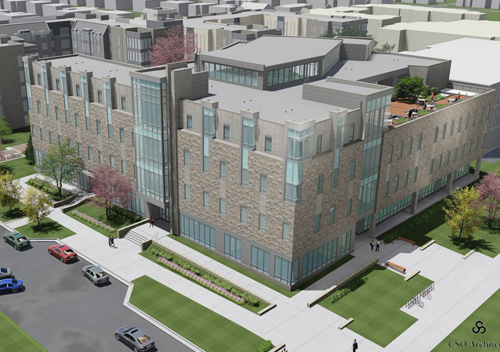 The transformation of the Butler University campus is continuing with the college’s plans to break ground next month on a $49 million building to house its School of Business.

Butler’s business school now occupies the Holcomb Building which, along with neighboring Gallahue Hall, will be renovated in the next few years as part of a separate, $92 million project to grow the school’s science program.

The nearly $140 million in construction is part of a larger Butler building boom that includes the addition of two new residences halls—one completed last fall and another slated to be finished in summer 2018. The total cost of the projects exceeds $220 million.

“We really have to compete in our academic programs,” he said. “The two areas that are growing and consistent with our strengths are business and science. With our business school, better than half of our classes are taking place outside Holcomb and in facilities that are well behind their times.”

The four-story, 130,000-square-foot School of Business building will be constructed directly north of Irwin Library on a surface parking lot. Work is set to begin June 1 and should be completed before the fall 2019 school year.

Within that time frame, Butler plans to start renovations to Holcomb and Gallahue, both built in 1970, to expand the science program. The improvements to the two buildings should be finished in the next five years but won’t start until construction on the new School of Business building is well under way.

“We’re still in the early stages of fundraising, but we decided to go ahead and file for zoning approval,” said Rich Michal, Butler’s executive director of facilities. “We’re confident we can start construction in the next year or two.”

Butler received zoning approval April 19 from the city’s Metropolitan Development Commission for both the new School of Business building and for renovations to Holcomb and Gallahue.

The university is constructing the $49 million School of Business building with the help of a $25 million gift last spring from longtime Indianapolis business executive Andre Lacy and his wife, Julia. In recognition of the contribution, the largest in university history from an individual or family, Butler renamed its business school the Andre B. Lacy School of Business.

Butler’s big challenge, Michal said, will be coordinating the renovation of Holcomb and Gallahue, with classes still in session, and while building the new Lacy School of Business building.

The improvements to Holcomb and the adjacent Gallahue will begin with the construction of an enclosed three-story atrium on the south-east side of the buildings to create a new entrance and study space for students. The bridge on the second level connecting the buildings will be enclosed by the atrium.

Butler also plans to construct an addition, to the north and west of the buildings, to accommodate the expected growth in the school’s science program, Michal said. Also, physics, computer science and math classes held in Jordan Hall will be moved to the Holcomb and Gallahue complex.

The atrium and the addition to the buildings will total roughly 55,400 square feet.

The new School of Business building is necessary to meet demand for the program, Danko said. In 2010, 650 undergrads were pursuing a business degree. That number since has swelled to 1,000.

“We had to have facilities that accommodated that, he said.

Overall, for the fall 2016 semester, Butler welcomed 1,272 freshmen to campus—the largest class in the school’s history—pushing school enrollment to 4,806.

The $43 million Fairview House opened last fall and was built on the existing Irwin Library parking lot along Sunset Avenue. It features 633 beds and amenities such as study lounges, a fitness center and entertainment room.

A $39 million dormitory is under construction and should open in fall 2018, replacing the demolished Schwitzer Hall at the south end of the campus. Built in 1953, Schwitzer was the oldest residence hall on campus.