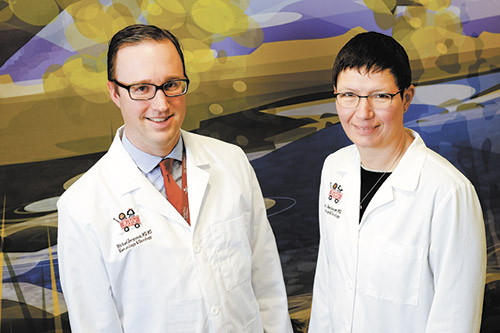 Kids with aggressive or recurring cancers have a new team looking out for them at Riley Hospital for Children at Indiana University Health.

Launched less than two years ago, Riley’s Pediatric Cancer Precision Genomics Program takes on the toughest childhood cancers, tailoring treatments to specific patients based on their genetic profile and simultaneously conducting research that could have broader applications.

“Working together as a group to try to figure out if we can get new medicines for these children is really amazing work and will change the landscape of cancer treatment for children,” predicted Dr. Michael Ferguson, medical director for the program and one of 10 dedicated staff members on the clinical side.

Ferguson’s team works in tandem with a dozen people on the research side to break new ground in fighting the 25 percent to 30 percent of childhood cancers for which cures have proven elusive.

The Precision Genomics program has received about 150 referrals since its inception and has worked with about 110 patients, most of whom are from Indiana.

The team responds to all referrals and strives to treat everyone, but sometimes children are too sick or there’s not enough tissue available to perform the molecular profiling that is the cornerstone of the program, said Dr. Jamie Renbarger, who runs the program.

Precision genomics programs, which are relatively new, often see only cancer patients who’ve had a previous diagnosis and a recurrence. But the Riley program also sees patients immediately after their initial diagnosis if the cancer has already metastasized or is known to be especially aggressive, Renbarger said.

That means collecting tissue for research when appropriate, closely monitoring a patient’s response to treatment over time, and constantly re-evaluating options.

Once a patient’s molecular profile is discovered, the team at Riley pores over all applicable drug trials that have been conducted involving both children and adults, Ferguson said. They also look for answers in databases of pre-clinical research. Once the medical team has identified the best drug to use, the staff works with insurers and drug companies to make it available.

It’s not uncommon to find an appropriate treatment that was previously approved only for adults and for which there is no dosing protocol for children. “It’s one thing if you’re treating a 17-year-old,” Renbarger said, but a different matter entirely if you’re trying to determine the correct dose for a 2- or 3-year-old.

Learning more about dosing for certain drugs or finding treatments previously used only on adults will help “open up the pipeline for us for new drug therapies” for pediatric cancer patients facing difficult prognoses, said Amy Helvie, the program’s clinical pharmacist.

An added value of the program so far has been the identification of genetic traits that might pose concerns for family members who carry the same traits. In 10 percent to 15 percent of cases, the team has advised one or more people in a patient’s family to take precautions or seek treatment.•