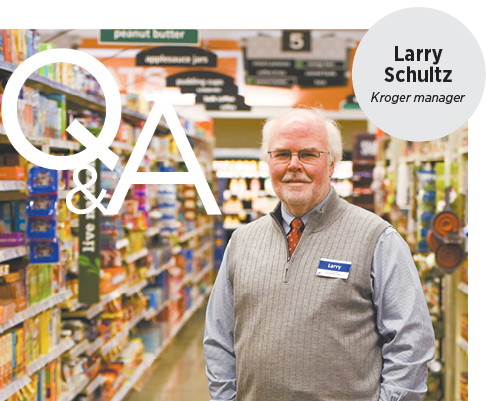 Larry Schultz has been a fixture in downtown Indianapolis grocery stores for decades. He started at the O’Malia’s in Lockerbie Square in 1986—the year the store opened. He stayed at the store when Marsh took over in 2001, except for a brief period when the company transferred him elsewhere—his absence creating a neighborhood uproar that attracted TV news cameras. He ended up back downtown as manager of the Marsh that opened on Michigan Street in 2014. When the company went under, Kroger hired him to manage the store. Schultz, 60, likes to say he “came with the building.”

How has downtown changed since the start of your career?

Back then, it was a community of a lot of pioneers that came downtown and took the gamble. O’Malia’s was the first grocery downtown, way before the mall, way before anything else. That was before “Mass Ave.” We were doing little festivals and events just to get people to realize it was there.

Most of your career was in Mass Ave. How does Michigan Street compare?

Why do you think customers have taken to you so well?

To me, it’s the simple life, just being nice to people. Treating them with respect. Maybe I simplify life, but I do think it’s that easy. Kroger, when they hired me, they said, “Your job is to kiss babies, shake hands, and keep people happy.” There’s a little more to it, of course.

How has technology changed your job?

When they remodeled this store, they put $2 million into it. Half of that is technology. We have a great system that monitors the temperature of every refrigerator case. That’s where it’s new and exciting.

Has it affected your ability to connect with your customers?

The younger generation is so into their phones, their ear buds. When I go up to somebody that’s younger, a lot of times I get a look. I say, “Tell me what you need; I’ll help you.” They really appreciate it.

Who are the people who stick out the most to you in your time downtown?

If you listen, everybody has a story. Treat people well and smile, and don’t judge.

There’s one gentleman [whom he befriended in the store and then helped take care of]. He was a mailman his whole life. He was in Pearl Harbor. Every Christmas, he would make me write checks [from the man’s checkbook] for his charities, United Way and all the different ones. They all got $50 each. No big deal. I found him passed away in his apartment. I found out he was extremely wealthy. [His estate] was over a half-million dollars. It floored me. He just had a small efficiency apartment. He shopped on QVC. His pants were always six sizes too big.

What else is going on in your life?

In early 2014, I was diagnosed with cancer. It’s called Waldenstrom’s. It’s a type of lymphoma. It’s chronic, but it won’t kill me. It gives me a little bit of fatigue. I’m having good results with a new drug I’m on. [Being at work] helps me tremendously. Being in an environment that I’m used to, with so much support and smiling faces. My associates are wonderful. Everything is good.•