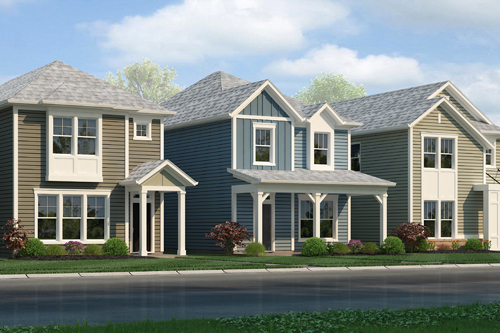 A national homebuilder plans to construct a $15 million housing community on the former Central State Hospital site on West Washington Street—bringing even more investment to an area on the mend.

Columbus, Ohio-based M/I Homes says it will build 40 single-family homes and 20 town houses starting in the low $200,000s. The project, called 58/Bahr, is named for the Bahr Treatment Center building, which was constructed on the site in 1958 in honor of Central State Hospital superintendent Dr. Max A. Bahr. It's planned for a stretch of Kirkbride Way, about a block northwest of the intersection of West Washington Street and Warman Avenue.

South Bend-based Holladay Properties, a master developer of the Central State site along with the team of Mike Higbee and Charlie Garcia, demolished the Bahr building in November 2015 to prepare the land for development.

Holladay is partnering on the M/I Homes project by performing the utility and infrastructure work, as well as creating the lots for M/I to build upon.

Holladay last year partnered with Indianapolis-based Compendium Group Inc. to begin building 15 single-family homes and four town houses. Seven of the 15 homes have been built and the other eight are under contract. Compendium now is beginning to market the town houses, said Derek Naber, a developer for Holladay.

Compendium is building The Villages at Central State on the property fronting West Washington Street on Central Greens Boulevard between Tibbs and Warman avenues.

M/I Homes’ 58/Bahr will be built on 7.3 acres to the north of The Steeples apartment complex, which sits to the east of The Villages at Central State.

The homebuilder plans to begin constructing the first house in May, to have it ready for the 2018 Builders Association Downtown Indy Rama Home Show beginning Aug. 10, said Kenny Windler, M/Homes’ area president.

Construction on 58/Bahr will ramp up in late summer, after Holladay has finished installing the infrastructure, he said. The homes will feature open-concept first floors, three bedrooms and rear-load detached garages.

“We think there will be good demand for the project,” Windler said. “Compendium has had good success on the homes they’re selling, so we see no reason why that wouldn’t continue.”

Interest from homebuilders in the Central State site has been years in the making.

Central State Hospital closed in 1994, and the city bought the 150-acre property a decade later. Development began in 2011, when Carmel-based Pedcor Cos. broke ground on the site’s first project: the 144-unit affordable apartment complex called The Steeples, with the help of federal tax credits.

Another developer, Indianapolis-based Reverie Estates, converted the hospital’s administration building, constructed in 1938 and now called Central State Mansion, into a mix of micro-offices, creative studios and co-living spaces. Reverie developed the project along with the 1899 event center west of the mansion that originally housed the hospital faculty dining hall.

Naber at Holladay said 27 acres on the northern end of the Central State site remain available for housing and could accommodate a 200-home development.