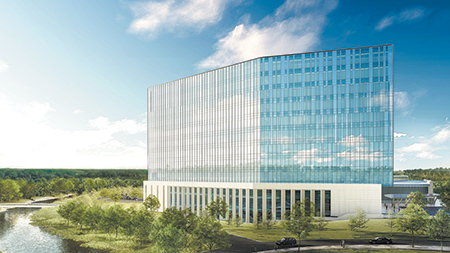 Ensuring the $572 million criminal justice center connects with the surrounding Twin Aire neighborhood and doesn’t sit isolated presents a big challenge for planners of the project and community leaders.

The four-building complex—which will house the courts, jail and sheriff’s department, in addition to an assessment and intervention facility—is set to be built southeast of downtown on part of 140 acres where the Citizens Energy coke plant once stood.

City and neighborhood leaders hope the increased traffic from workers and visitors will spur private commercial and residential development on the rest of the sprawling property, providing a much-needed boost to the banged-up neighborhood.

Sitting just east of South Keystone Avenue between Southeastern Avenue and Prospect Street, the site is even bigger than the 103-acre former GM stamping plant property west of downtown that is widely considered by local officials to be an ideal fit for Amazon’s HQ2.

“The reason the neighborhood is excited about the community justice center coming here is that it will increase traffic, and integrating the two is a key principle of the plan,” said Tedd Grain, deputy director of the Indianapolis office for the Local Initiatives Support Corp.

Twin Aire is one of five neglected Indianapolis neighborhoods LISC is targeting for its Great Places 2020 initiative. It aims to raise $200 million from private-sector investments and federal tax money to spark residential and commercial activity in those areas. 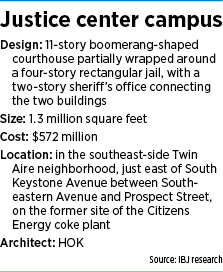 Twin Aire is home to about 6,100 residents. The area’s median household income is just $20,320, roughly half that of Marion County overall.

To the west of the justice center, plans call for apartments and town homes to be built on the 26 acres where the former Twin Aire Drive-In stood.

And to the south, across Prospect Street, plans show a mix of buildings that would be a maker space.

The city is in the process of purchasing the entire 140 acres from Citizens and likely would sell pieces, including the former drive-in property, to private developers through a bidding process.

“It’s a huge catalyst for private investment,” Andy Mallon, the city’s corporation counsel, said. “That’s what that area of town has not seen.”

Integrating so much development into the existing neighborhood is a major part of the plans.

The justice center would be connected by building a bridge across Pleasant Run Creek and moving the primary IndyGo transit link for the neighborhood to the front of the courthouse.

In addition, the Pleasant Run trail system would be expanded throughout the entire development and any private commercial development that occurs between Southeastern and English would feature streetscapes that encourage walkability.

The improvements to Southeastern and English would help link the area to the Twin Aire shopping center, which city and neighborhood leaders hope can be redeveloped.

Anchored by a Kroger, the center is owned by a Chicago firm that has invested little in it, leading to multiple vacancies. But the property still holds historical significance to the neighborhood. It was the city’s first shopping center upon opening in 1957.

Linking the justice center to its surroundings presents challenges, however, said Abbe Hohmann, president of Site Strategies Advisory LLC. She served as an adviser to Citizens Energy when it sought a state grant exploring redevelopment opportunities for the site.

The former coke plant property is bounded by railroad tracks to the east and west, and there’s no direct access to it from English Avenue. Farther west, Southeastern and English avenues converge into a messy five-street intersection near the shopping center, she said.

Grain at LISC said additional funds might be needed for the bridge and trail expansion. He hopes, though, that the bridge can feature enough architectural elements to stand out and give the area more of an identity.

The city hired St. Louis-based HOK as architect for the justice center project. It has designed an 11-story courthouse that Jeff Goodale, a senior vice president of the firm, described as “timeless and not trendy.” 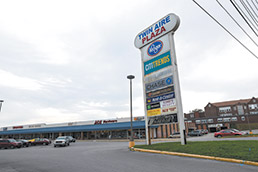 City and neighborhood leaders hope the criminal justice center’s presence will spur redevelopment of the Twin Aire shopping center, which was the city’s first shopping center when it opened in 1957. (IBJ file photo)

Despite the site’s challenges, he’s confident the justice center will become a pillar of the area.

“You’re moving a lot of city-county employees to this area, and you have a lot of consumers of all walks of life using the center,” Goodale said. “What we see with facilities like this, that kind of private development absolutely comes along with it.”

“There’s nothing between downtown and Twin Aire that will be that high,” he said.

Preliminary soil work is set to begin as soon as the city finalizes the sale with Citizens Energy, which should be within weeks, Mallon said.

The city in December agreed to purchase from Citizens the 140-acre property by buying outright certain parcels for $2.1 million and leasing others for an additional $2.1 million. It will take full ownership once Citizens completes environmental remediation.

Construction on the justice center should be finished in late 2021.

Part of Citizens’ environmental cleanup involved dredging the creek bed through the length of the property to rid it of coal tar deposits, said Dan Considine, spokesman for Citizens Energy. The company also re-graded the banks of the creek and planted grass to improve its appearance.

Overall, Citizens has spent $38.6 million at the site—$15.7 million to demolish the coke plant and $22.9 million for environmental remediation, Considine said.

The plant produced coke, a solid carbon material that is used as fuel, until it closed in 2007. It opened in 1909.

Manufacturing jobs like those at the coke plant that once helped support the blue-collar area are dwindling and hastening its decline.

Grain and other city supporters hope the criminal justice center will help reinvigorate the neighborhood.

“We feel pretty good about the overall plan having a lot of momentum,” he said.•