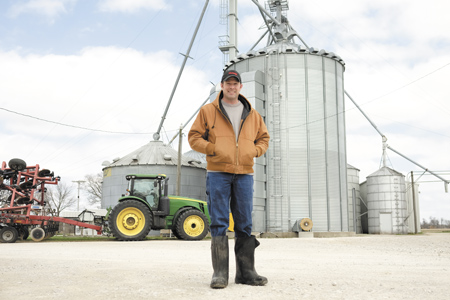 As the United States and China face off over tariffs and trade policy, some of Indiana’s most important industries are right at the center of the dispute.

Over the past several weeks, the two countries have imposed tariffs on specific items and threatened tariffs on others. The lists include steel, aluminum, pork, soybeans, corn, motor vehicles, chemicals and other products from industries heavily represented in the Hoosier state.

In fact, Indiana is the nation’s top steel-producing state as well as being the most dependent on manufacturing, which relies on steel.

“Indiana is central to all of this stuff,” said Mark Muro, a senior fellow at the Metropolitan Policy Program at the Brookings Institution, a Washington, D.C.-based public-policy think tank. “It is not surprising that your state is affected in multiple ways.”

It’s a complex situation. Some of the tariffs have already been implemented while others might not be, if the two countries can reach an agreement. The recently enacted tariffs are helping Hoosier industries in some cases, while hurting in others.

“People say there are no winners in trade wars—but you can be a loser twice,” Hardin said. “There’s ripple effects all the way through the ag economy when you have something like this happen.”

Hog prices dropped after China imposed a 25 percent tariff on U.S. pork, Hardin said. Hogs are selling in the mid-$30s per 100 pounds these days, down about $20 from the typical price this time of year.

The result is that U.S. hog farmers are making less money—even if none of their animals ends up in China.

At the same time, Hardin has seen the cost of steel grain bins, gating and other steel-related farm items increase since the U.S. tariffs on steel and aluminum kicked in, forcing him to delay needed purchases.

And as tensions continue, both countries have threatened to impose tariffs on even more items. China’s list includes soybeans and corn; Hardin grows both those crops on his family’s farm.

Hardin said the operation he co-owns with his father is “a very small drop in a very large bucket,” producing about 12,000 market hogs per year.

MORE FROM IBJ
See how Indiana tops the nation in both steel production and in its dependence on manufacturing.

But as a whole, the state has about 3,000 pork farmers, and Indiana is the nation’s fifth-largest pork producer, according to the industry group Indiana Pork.

Just over a quarter of U.S. pork is exported, Indiana Pork says. U.S. producers exported $1.1 billion of pork to China last year, making it one of the top markets for American pork.

Soybeans also stand to see a big impact if China carries out its threatened tariff.

Last year, Indiana farmers grew 321 million bushels of soybeans, making the state the nation’s fifth-largest soybean producer, said Melanie Fitzpatrick, senior director of marketing and communications for the Indiana Soybean Alliance. And a third of that crop is exported to China, making that country the largest single market for American soybeans.

The soybean industry has worked for years to build a demand for its product, Fitzpatrick said, and a tariff would make soybeans prohibitively expensive in the Chinese market.

“Years of work would be for naught because China will buy from other countries,” she said.

Indiana manufacturing will also be affected by tariffs—though in different ways depending on the industry.

“It’s reasonable to say virtually all of our manufacturing is going to be affected,” said Michael Hicks, the George and Frances Ball distinguished professor of economics and business research at Ball State University.

Because steel is a commodity, Hicks said, steel prices tend to be consistent across manufacturers. So when the price of imported steel went up as a result of tariffs, the price of U.S.-produced steel rose as well.

That might be good news for steel mills and aluminum smelters, but it’s bad news for downstream industries that use these commodities in their own products.

From motor vehicles to industrial machinery to the train wheels that transport a product to market, Hicks said, steel is “part of the production of, ultimately, almost everything that we manufacture.”

Some aspects of the U.S./China trade stand-off are yet unknown.

After the United States imposed its tariffs on foreign steel and aluminum, China imposed tariffs on U.S.-produced pork, stainless-steel pipes and a long list of fruits and nuts. But then, this month, each country came out with an additional list of proposed tariffs on specific items produced by the other country.

Neither country has specified when these tariffs might go into effect.

But the debate is already having an impact on Hoosier trade, said Doris Anne Sadler, president of World Trade Center Indianapolis. The organization, one of 320 WTC organizations around the world, works to stimulate trade and investment opportunities for commercial property developers, economic development agencies and international businesses.

“Really, what’s impacting us now is the uncertainty,” Sadler said. “We can see some stifling of potential trade deals.”

In January, the world trade centers in Indianapolis and in Harbin, China, signed a memorandum of understanding to work together on agriculture-based trade and commercial exchanges.

Sadler said work continues on that partnership, and she plans to travel to the Netherlands next week for discussions about other Chinese trade deals that wouldn’t be affected by the tariffs.

But Sadler said she is aware of cases in which U.S. and Chinese partners are rethinking business deals because they fear the impact of new tariffs.

Another wild card: On April 12, President Donald Trump indicated interest in having the United States rejoin the Trans-Pacific Partnership if it offered a “substantially better” deal than was offered to President Barack Obama. China is not one of the 11 countries in the Trans-Pacific Partnership, Sadler said, but if America were part of the TPP, it would not have to negotiate as many individual trade agreements with China. However, on April 17, Trump tweeted that he didn’t “like the deal for the United States. Too many contingencies and no way to get out if it doesn’t work.”

Hardin, the Hendricks County hog farmer, said he hopes the current level of uncertainty will get resolved soon.

So far, he said, he’s been able to weather the bumps and keep all five of his full-time employees on the payroll. “Six months from now, if this is still going on, there’s going to have to be some hard decisions made.”•