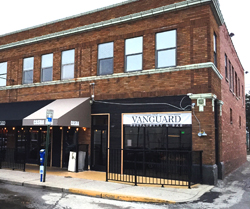 The Vanguard restaurant and bar in Broad Ripple has closed after losing its chef and bar manager to a new restaurant planned by Sahm Restaurant Group.

Vanguard owner Bill Ficca, in a Facebook post Tuesday, said the Vanguard has lost the “bulk of its staff” and would be shut down for the “near term,” while he comes up with a new plan.

The Vanguard opened at 6319 Guilford Ave. in December 2016 in a space where Ficca had previously operated Usual Suspects.

The establishment gained a reputation for offering creative high-end food and cocktails produced by chef Adam Ditter and head bartender Steve Simon, who had previously worked at LongBranch, a short-lived but well-reviewed Asian-inspired restaurant in Fall Creek Place. Ficca hired the pair after LongBranch closed in May 2017.

In his Facebook post, Ficca said Ditter and Simon gave him “3.5 days notice” that they were leaving.

“As such we are left with no choice but to shut the restaurant for the near term and come up with a new plan,” Ficca wrote.

Eddie Sahm of Sahm Restaurant Group said Ditter and Simon have joined his staff at the Liter House, which is set to open the second week of July at 5301 Winthrop Ave. Ditter will be sous chef and Smith will work behind the bar.

The German-themed brewpub is taking the space previously occupied by Bent Rail Brewery & Restaurant, which closed in December after less than three years in business.

The owners describe Liter House as a “brewpub that focuses on classic German beer styles” where a “Midwestern farm-to-table-food mentality meets a German beer hall vibe.”

Meanwhile, Ficca, a serial restaurateur who is also involved in 317 Burger, Delicia and Northside Social, said he was open to new ideas for the Vanguard.

“If any seasoned restaurant/ bar people would like to offer proposals, please reach out to us and we'd be happy to listen and evaluate,” he wrote. “Thanks to all of you who frequented The Vanguard and supported our quest to be at the forefront of the resurrection of Broad Ripple. We still staunchly believe in the area and we will return better than ever.”