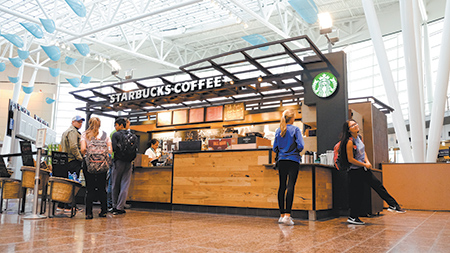 The list includes some newcomers, along with others that already operate at the airport.

These 19 retailers, which would occupy 23 retail spaces, are among a wave of retailer contracts up for approval at the Indianapolis Airport Authority board meeting Friday.

Airport officials declined to comment in advance of the meeting. And because some of the spaces are being reconfigured, it’s difficult to determine which existing retailers newcomers will displace.

Airport officials are recommending the board award the the contracts below. (Some are with third-party operators; others are directly with individual retailers.)

The agreement calls for Hudson to pay the airport $844,677 per year or 17 percent of total sales, whichever is greater. The airport estimates it would receive $21.2 million over the the 10-year agreement.

—Indianapolis-based popcorn seller Just Pop In would upgrade its store in Concourse B, adding a “Bubbles” bar featuring popcorn/wine pairings. The retailer would also upgrade its kiosk in Civic Plaza and add a kiosk in Concourse A.

The agreement calls for Just Pop In to pay $56,126 per year or 11 percent of sales, whichever is greater. The airport estimates it would receive $913,471 over the 10-year lease.

—Natalie’s Candy Jar, operated by Dallas-based Melshire DFW LP, would relocate its Concourse B store to a different spot in that concourse. It would open a second store in Concourse A.

The agreement calls for Melshire to pay $110,766 or 13 percent of sales each year, whichever is greater. The airport estimates it would receive $2.7 million over the 10-year lease

The agreement calls for Enroute to pay $43,000 or 6 percent of sales each year, whichever is greater. The airport estimates it would receive $456,257 over the 10-year lease.

The airport’s concessions offerings are in flux because most of its store and restaurant tenants –43 in all—saw their leases expire at the end of 2018 and are now operating under short-term leases. Many tenants signed 10-year leases when the airport terminal opened in 2008, which is the reason so many leases are expiring at once.

Airport officials have been working on a concessions plan for several years, with an eye toward rethinking its offerings and bringing more local flavor to the airport.