The owner of a historic downtown office building that's being redeveloped into a hotel is seeking city approval to build a towering addition that would replace most of an adjacent 96-year-old building, creating room for 35 more guest rooms and extra meeting space. 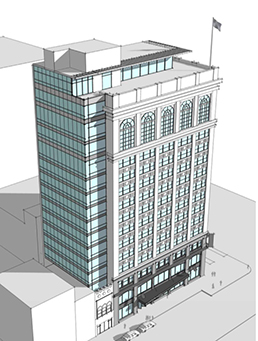 The 16-story addition on the north end of One North Penn would add 35 guest rooms and extra meeting space. (Image courtesy city of Indianapolis)

Indianapolis-based developer Loftus Robinson, operating as 1NP LLC, is expected to ask the Indianapolis Historic Preservation Commission during an upcoming public meeting to green-light the 16-story, glass-encased addition to the Odd Fellows building at 1 N. Pennsylvania St., on the northeast corner of Washington and Pennsylvania streets.

The group is looking to buy the three-story building directly to the north, at 15 N. Pennsylvania St., for the project. That building, which dates to 1923, housed a ground-floor Jack’s Pizza that recently closed. It also has a single condo on the top two floors.

The building itself would be demolished under the plan, but the façade would be preserved and remain on the bottom floors of the addition.

Kimpton Hotels & Restaurants first announced plans to turn the 111-year-old Odd Fellows building into a 130-room hotel in December 2017. At that time, it said the project would include a signature restaurant, a rooftop bar and 5,000 square feet of meeting space, all of which remain part of the plans.

Loftus Robinson bought the 82,565-square-foot building in April 2017, with plans to renovate the property.

Efforts to convert the building come as Loftus Robinson continues a legal battle with Centier Bank—one of the property’s last-remaining tenants—over what the ownership group has called a breach of lease by the banking company.

Both Loftus Robinson and Centier have declined to comment on the matter. The developer has acknowledged the legal action has led to delays in the project, which originally had been expected to open in 2020.

During a Feb. 6 meeting of the IHPC, project architect Jack Paruta, of Gensler Architecture’s office in Morristown, New Jersey, discussed the scope of the project and the decision to build an addition.

Updated renderings show a glass-covered addition to the building that looks much different than the 1 N. Pennsylvania building.

The new area would also have two elevators, adding to the four lifts in the main building, which are expected to be modernized as part of the building’s overhaul.

Loftus Robinson also has acquired space in the first and second floors of the building directly east of the main hotel building, at 110 E. Washington St. That area will be used for back-of-house and kitchen operations for the hotel, Paruta said.

The 14th story of the Odd Fellows building—a double floor that was once home to a large auditorium—is expected to be converted into ballroom and meeting space, including at least one boardroom.

While the IHPC did not vote on the plan changes during the meeting (a vote is expected in either March or April), members of the commission offered feedback that suggests many support the developer’s efforts.

In its current design, the addition would be flush with the west facade of the main building, though members of the IHPC suggested a slightly staggered design to better differentiate the historic property from the new space. They also noted the rooftop bar could be an issue for the developers if they choose to pursue federal historic tax credits on the property, which Paruta indicated is of interest.

Representatives of Loftus Robinson did not respond to a request for comment on Wednesday.