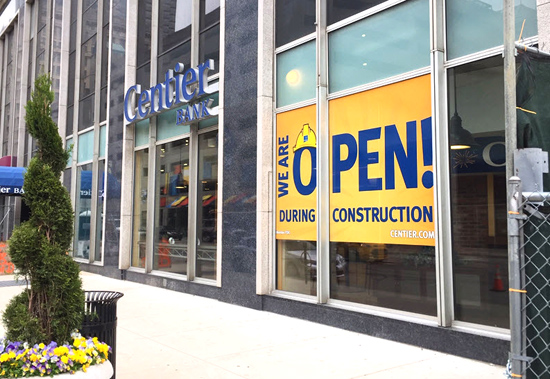 Plans are moving forward to turn the historic One North Penn building downtown into a swanky hotel, as its anchor tenant at street level ends its holdout and searches for new space.

Indianapolis-based developer Loftus Robinson LLC, which owns the building as 1NP LLC, has reached an agreement with Centier Bank to resolve their legal fight over the 2,800-square-foot bank branch on the ground floor of the building.

Centier plans to relocate the branch by Sept. 1, according to a bank official.

The parties had been embroiled in a legal dispute since late 2018, and a bench trial was set for Jan. 28, 2020. But last month Loftus Robinson and Centier jointly filed for a stay of litigation in the case after reaching a settlement in principle that would resolve all of their issues.

Drew Loftus, president of the development firm, confirmed to IBJ in a statement that Loftus and Centier have “reached an agreement.”

“The (hotel) project is moving forward as planned,” the statement said, noting the developer is working with its design team and contractor to prepare a submission to the Indianapolis Historic Preservation Commission regarding an addition to the building.

Merrillville-based Centier told IBJ it is “actively looking” for a new space in the downtown corridor.

Loftus Robinson announced in late 2017—just months after acquiring the property for $7 million—it had struck a deal with San Francisco-based Kimpton Hotels & Restaurants to redevelop the 111-year-old building as a 130-room hotel.

The Kimpton-branded hotel would feature a signature restaurant, rooftop bar and 5,000 feet of meeting space. An addition creating 35 more guest rooms has also been proposed for the project but hasn’t yet won approval from the IHPC.

Centier’s branch has occupied the southwest corner of the building since 2015. According to a lawsuit filed by Loftus Robinson late last year, Centier initially agreed in 2017 to negotiate a lease for locating the branch to a building immediately east of One North Penn.

However, the parties did not come to an agreement on the new lease, and Loftus Robinson sued Centier for failing to negotiate in good faith. The bank rejected its claims and filed a counterclaim alleging breach of contract.

Centier has declined to comment publicly on the litigation. In the meantime, it has continued to operate its branch in the building.

According to joint court filings, the two parties participated in mediation in February. On the evening of March 4, they reached an agreement in principle for a settlement. They requested the stay of litigation while they prepared the necessary documents for the settlement.

Kimpton continues to have faith in the hotel project, remaining eager to introduce its brand to the Indianapolis market, according to a statement from the company.

“We are excited to showcase the finished Kimpton product to the local community as well as travelers from across the globe,” the statement said.

Kimpton operates more than 60 hotels in the United States, Europe and the Caribbean, touting itself as the “industry pioneer” of boutique hotels.

The push to revamp One North Penn—designed by prominent local architecture firm Rubush & Hunter as the city’s first high-rise—comes as other historic buildings downtown prepare for similar changes.

The former IBJ Media building at 41 E. Washington St. is expected to be included in a plan to create a 350-room Drury Inn, incorporating a vacant lot next door that would be the site of a hotel tower.

The Stock Yards Bank & Trust Building, 136 E. Market St., is also expected to be remodeled as a hotel.