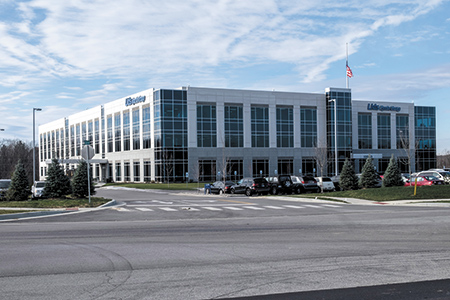 Three years after moving into a brand new $22 million headquarters building in Zionsville, Lids Sports Group is moving its operations into much smaller offices in Indianapolis.

Bethesda, Maryland-based investment firm Ames Watson Capital LLC, which bought Lids from longtime owner Genesco Corp. in February for $101 million, plans to move company operations this summer to a 40,000-square-foot space at Woodland Corporate Park, near 71st Street and Interstate 465 on the city’s northwest side.

The local office of real estate firm Cushman & Wakefield announced Monday that it was handling the listing for the 150,000-square-foot Zionsville headquarters property, which is being sold by Nashville, Tennessee-based Genesco.

Genesco hopes to find a new tenant for the building before selling it. The team of Bennett Williams, Mitch Ostrowski, Jon Owens and Dave Moore from Cushman & Wakefield are marketing the building.

The building in Creekside Corporate Park, north of 106th Street and east of Zionsville Road, features a cafeteria, gym, banquet room and conference center, and basketball court. The grounds include an outdoor patio and walking trails.

Lids, the nation’s largest retailer of licensed headwear, announced it was building the high-profile headquarters in 2014 as part of plan to hire 758 jobs at the building and at is local distribution operations over the next 10 years.

About 400 people worked there when the offices opened in 2016, but that number has fallen significantly.

Lawrence Berger, a partner with Ames Watson, told the Washington Business Journal that his group planned to consolidate the operations of Lids and Fanzz in an attempt to “reinvigorate the stores.”

Genesco announced in February 2018 that it planned to sell Lids, but it took longer than the company expected to find a buyer for the firm, whose sales performance has been on the decline.