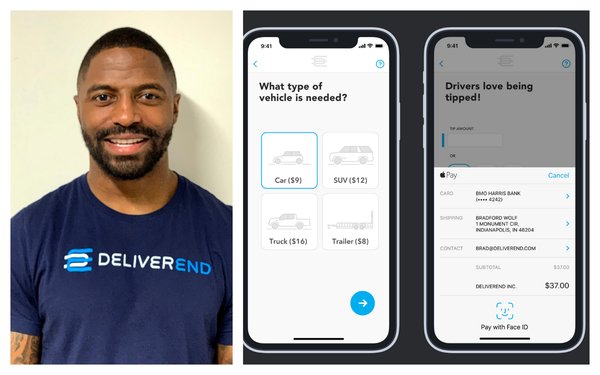 Local start-up DeliverEnd is looking at a high-speed month of May.

The firm announced it is rolling out an app May 26 that helps people and companies sell items online locally while removing the need to meet in-person for delivery. The app will be available on the iPhone App Store and Google Play Store.

To help tout its product, DeliverEnd has signed a sponsorship deal with new IndyCar racing team Harding Steinbrenner Racing and its driver Colton Herta. Financial terms of the deal were not disclosed.

“We are excited to have DeliverEnd join us for the Indianapolis 500.” said co-owner, George Steinbrenner IV, the grandson of  late Yankees owner George Steinbrenner. “They provide a unique service that protects individuals who are looking to make consumer to consumer transactions, and they will bring that service to the track and our team this" month.

Harding Steinbrenner Racing is entering its first season in the IndyCar Series. Steinbrenner, at 22, is the youngest IndyCar team owner. His entry into open-wheel racing, has attracted national media attention.

But the younger Steinbrenner, who is only a few years older than his team’s drivers, is no stranger to the world of racing. His grandfather once partnered with legendary IndyCar team owner Pat Patrick in several Indianapolis 500s in the 1970s.

George IV’s father, Hank, now a co-owner of the Yankees after his famous father passed away in 2010, was a sponsor on Darrell Gwynn’s NHRA Top Fuel team in the early 2000s.

Harding Steinbrenner’s driver—19-year-old Colton Herta, the son of retired IndyCar and Champ Car driver Bryan Herta—also has garnered attention this season and is seen as one of the rising young stars of IndyCar racing.

DeliverEnd was founded in 2017 by Indianapolis native and Southport High School graduate Nick Turner, who played football and was a member of the track and field team at Indiana University, where he majored in telecommunications and psychology. This year, Turner was nominated for two Mira Awards—New Tech Startup of the Year and Rising Entrepreneur of the Year.

DeliverEnd’s app is designed to eliminate the risks associated with local buying and selling on online marketplaces by removing in person meet-ups and replacing them with an in-app live video chat for managing the financial transaction and using pre-screened drivers to pick up and deliver purchased items.

The app is free to download. DeliverEnd generates revenue by taking 25 percent of the delivery charge. The delivery driver gets the rest.

The company is focusing on the Indianapolis market initially, but will launch marketing campaigns in Cincinnati, Columbus and Cleveland, Ohio; and Louisville and Chicago later this summer. The company has nine full-time employees, but Turner said DeliverEnd is hiring and will have 40 full-time workers later this year,

The company is raising capital and plans to close on a $3 million seed round by early July.

“We think our app is very timely,” Turner said. “It can be very dangerous meeting someone to buy or sell something. Someone was killed recently trying to buy a gaming system in South Bend. Our app provides safety features that can make a real difference and keep people safe.”

Already, DeliverEnd has more than 250 drivers—which have all been screened—under contract and another 400 drivers on a waiting list.

Given the strong business-to-business network in the IndyCar paddock as well as the Indianapolis 500’s mass appeal among U.S. consumers, the sponsorship should be a good fit to help Turner launch his company’s app, sports marketers told IBJ.

“We think this relationship will help us a ton,” Turner told IBJ from the Indianapolis Motor Speedway, where he was doing marketing work. “We have logos on both sides of the car, and we’re going to be doing a lot of other marketing in coordination to where the team is racing. In addition to that, the team and the IndyCar Series have been super supportive of us and the entire Indianapolis tech community.”

DeliverEnd’s sponsorship stretches beyond the Indianapolis 500 this month, and Turner expects to use races in other markets to make a splash for his startup.