Home » An acquisition can be answer to a tight labor market

Keen to beef up their workforces, some local companies are turning to a practice known as acqui-hiring—acquiring employees by buying the company they work for.

Acqui-hiring has been around at least a decade, especially among tech companies. But in an insanely tight labor market, it’s gaining traction locally as a potential alternative to traditional talent recruitment.

“It is an important trend. It’s here to stay,” said Tim Kopp, CEO of marketing technology firm Terminus Software Inc. About a quarter of Atlanta-based Terminus’ 300-plus employees, including Kopp, are based at the company’s Indianapolis office.

Last year saw a huge spike in mergers and acquisitions activity, both around the state and throughout North America. According to Indianapolis-based TechPoint, 57 tech companies with a significant Indiana presence were involved in a merger or acquisition last year. That’s up from 33 such deals in 2020.

Last year was also marked by pandemic-related labor upheaval—including the Great Resignation, in which an unprecedented number of workers have quit their jobs in search of new opportunities.

Though it’s difficult to say with certainty, the job market and the M&A market are likely related to some degree: As traditional hiring becomes more difficult, companies are more likely to turn to acqui-hiring as an alternative.

Late last month, the 17-year-old company completed its first-ever acquisition when it purchased Vancouver, British Columbia-based Groundswell Cloud Solutions, adding about 80 highly skilled employees in the transaction. GyanSys has about 2,000 employees total, about 150 of whom are based in central Indiana and the others at offices in India, the Philippines and, now, Canada.

Before deciding to do an acqui-hire, GyanSys originally planned to hire local talent.

In 2015, the company secured a promise of $4.45 million in state tax credits if it followed through on its plans to hire 246 Hoosiers by the end of 2020. But GyanSys never claimed any of those incentives—despite its best efforts, the company was not able to hire Indiana employees as it had hoped.

An example of the company’s hiring struggles: Several years ago, GyanSys extended employment offers to a group of 15 candidates. Only two people accepted jobs, Una said, “and those two—after six months of training, they left.”

Part of the problem, GyanSys says, is that it is not huge or well-known. And the work it does, while in demand, is not flashy. That can make it hard to compete with name-brand tech companies or those working on the cutting edge of technology.

“A lot of these young people, they want more exciting technologies,” said Kandy Vicini, a sales executive at GyanSys.

The company has been able to hire employees from outside of Indiana, including in India and the Philippines. It also uses 250 to 300 contractors—people who prefer the higher pay and flexibility of contract work over being a full-time employee with health care benefits.

Facing an enduring talent gap despite its use of contractors and geographically diverse employees, GyanSys decided about 18 months ago that acqui-hiring might be its best bet.

It hired a consultant to help with the process, and evaluated about 20 companies as possible targets. One of the reasons GyanSys chose Groundswell, Una said, was that the company had a higher employee retention rate than many other contenders.

Based on the early indicators of success with the Groundswell deal, Una said his company will “definitely” consider additional acqui-hiring opportunities, including opportunities outside the United States. 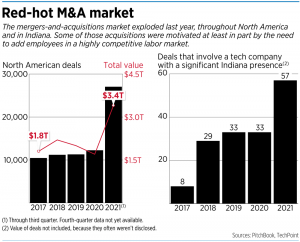 At Terminus, which has done five acquisitions since its founding in 2014, none of the deals has been purely driven by the need to acquire talent, Kopp said—but it’s always an important factor. “Everything’s an acqui-hire in some regard.”

That’s especially true in the tech sector, he said. “A technology company is really nothing but a building and people.”

One big benefit of acqui-hiring, Kopp said, is that it can be a faster way to pick up talent than hiring people individually. “M&A deals can easily get done in a couple of months. The primary reason people do it is speed.”

In comparison, Kopp said, it might take two to three times longer than that—six months or so—for a tech company to individually hire 10 engineers.

Speed is crucial in the tech world, he said, because the sector is so fast-moving and competitive. A company that can’t grow its workforce quickly enough risks falling behind.

But acqui-hiring is not only a phenomenon in the tech sector, and it’s not just a strategy for larger companies.

“It’s not a conventional way of adding talent, but it certainly has worked for us,” said Magenta’s CEO, Leslie Galbreath.

Magenta’s parent company, Fishers-based DGS Marketing Engineers, was formed in 1985 and handles marketing communications for advanced manufacturing clients across the country and internationally. DGS formed Magenta in 2017 to focus on central Indiana clients in a variety of industries.

In addition to potentially being faster than traditional hiring, Galbreath said acqui-hiring can also be less risky. In traditional recruitment, the time and expense invested in a search might go to waste if a promising candidate turns down a job offer, or if the new hire doesn’t work out as hoped.

In the case of the Omega Design acquisition, Magenta had worked with the company as a vendor for years. So Galbreath said she knew the Omega employee was a skilled and hard-working employee who would be a good fit. “We knew exactly what we were getting, and he hit the ground running.”

That said, personnel isn’t the only thing to think about when considering an acqui-hire. The deal also needs to make sense strategically, and the two companies need to be compatible.

Companies mulling an acquisition should investigate whether their culture, leadership and values will mesh well with that of the target company, said Julie Barker, CEO of Indianapolis-based Cultivate Talent. Barker’s firm offers recruitment, leadership development and other human resources services to tech startups.

A company that has a transparent workplace culture where information is widely shared with employees, for instance, might not integrate well with a hierarchical company.

“You can acquire talent, but if there’s misalignment, you’ll lose talent—and it might be some of [the acquiring company’s] talent,” Barker said.

At GyanSys, the company said it’s taking a slow, thoughtful approach to its Groundswell integration, and things have progressed smoothly in the first few weeks.