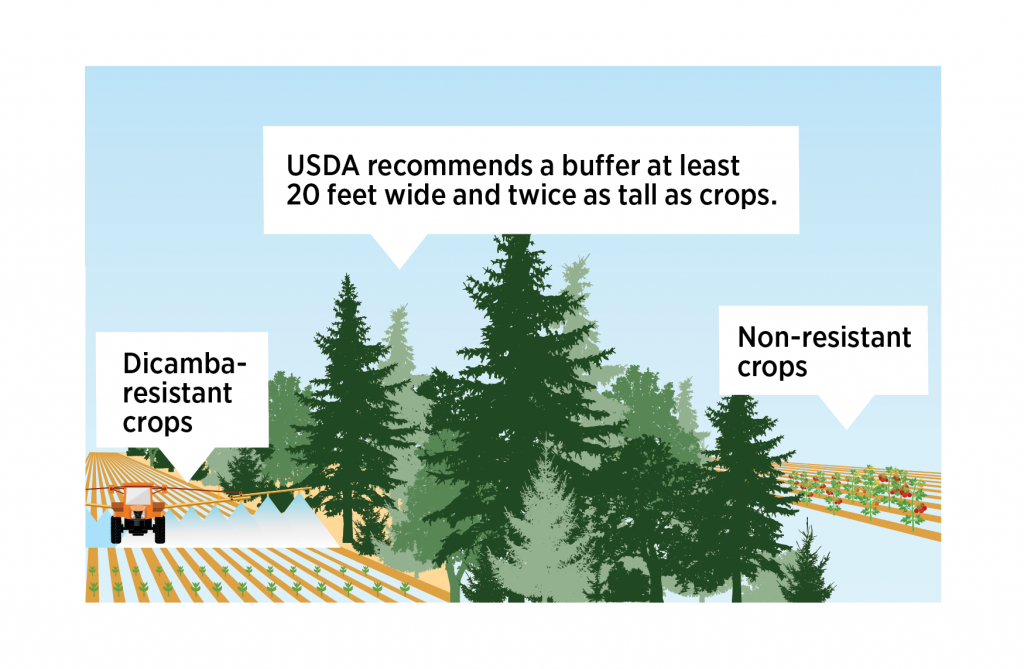 For a growing number of Indiana farmers, there’s trouble in the air.

And according to state officials and agricultural experts, it’s big trouble.

Farmers and state officials said dicamba, a herbicide developed in the late 1960s and re-introduced in 2016, is causing major problems because it more readily converts to vapor than do other herbicides. It drifts away from its targeted fields (filled with crops modified to be unhurt by the herbicide so they can thrive while weeds die) and damages neighboring un-modified crops, fruit, and other trees and plants.

Farmers in many states are hurt, but few more so than those in soybean-intensive Indiana.

The Office of Indiana State Chemist reports the number of dicamba-related complaints has skyrocketed in the last three years—and it’s costing the state millions of dollars to respond.

But farmers are taking the bigger hit. Even small amounts of dicamba hitting unintended crops can lead to a 30% to 40% yield reduction, agricultural experts said. That can mean a $180 loss per acre, or $100,000 for a medium-size farm.

For some farmers, it can be much worse. Because dicamba has only recently been reintroduced to the market, some crops—including tomatoes, grapes and green beans—don’t yet have a federal limit on the amount of the herbicide that can hit crops sold for human consumption.

Red Gold has worked with Purdue University to establish DriftWatch, a voluntary communication tool that enables farmers, beekeepers and pesticide applicators to work together to protect specialty crops through the use of mapping programs. The program was developed in part to protect crops from off-target dicamba strikes. It has been adopted by farmers in 22 states, including Indiana. Red Gold officials are warning their suppliers not to grow tomatoes in areas treated with dicamba.

Smith has seen the damage up close.

At his central Indiana residence last year, he lost more than a dozen trees—including apple, pear, peach, plum, silver maple and oak—to a neighbor’s dicamba use.

“Dicamba is a good weed killer, no doubt about it,” said Smith, chairman of Save Our Crops Coalition, a group of primarily Midwestern farmers who have fought to restrict dicamba’s use. “But it doesn’t stay where you put it.”

To no surprise, the two biggest makers of dicamba—Bayer, which bought herbicide maker Monsanto in 2016, and BASF—have faced numerous lawsuits.

This month, the two conglomerates, both based in Germany, took a major legal hit. In the first dicamba-related case to go to a federal jury trial, Bader Farms, Missouri’s largest peach farm, was awarded $15 million in damages on Feb. 14.

The jury also found that the two companies created a joint venture to manufacture and sell dicamba-resistant seed and low-volatility herbicides, and that they conspired to create an “ecological disaster” to increase profits.

“We clearly disagree with the jury’s verdict and are very disappointed with this result. We will swiftly appeal the decision,” Bayer said in a statement.

“While we have great empathy for any farmer who suffers from crop losses, in the case of [Bader Farms] there was no competent evidence presented in this case which showed that Monsanto’s products were present on his farm and were responsible for his losses,” Bayer said.

The company said it “stands firmly behind” its dicamba-related technology. “These are valuable tools for growers who need effective options to increase yields and combat resistant weeds and do not pose any unreasonable risk of off-target movement when used according to label directions.”

Bayer is also facing separate lawsuits concerning Roundup, which some say causes cancer. Bayer has contended in filings that there’s no proof of that and that it has no plans to discontinue the use of Roundup.

“Dicamba and Roundup complement each other and take pressure off each other,” Alex Zenteno, Bayer dicamba portfolio lead, told IBJ.

Bayer began producing its brand of dicamba—XtendiMax Herbicide with VaporGrip Technology—at the behest of farmers, company officials said. The company’s research on dicamba began in the early 2000s, with its dicamba-related products hitting the market in 2017.

“Growers are telling us they want and need this product,” Zenteno said. “The users of our dicamba are very pleased. We have a 95% customer satisfaction with the product.”

Many of the complaints are coming from users’ neighbors.

Zenteno said 2019 brought 34% fewer off-target inquiries than in 2018, even though dicamba use increased. Of 40 million acres of soybeans and cotton treated with its dicamba last year, Bayer said, the company received only about eight inquiries per million acres treated.

Indiana officials, however, are still swamped with complaints.

The Office of Indiana State Chemist—which deals with the complaints—has spent a total of $4.3 million, or nearly half its compliance budget, over the last three years responding to complaints and dealing with compliance issues regarding dicamba.

“For our agency, this issue is the biggest by far we’ve dealt with,” said David Scott, an administrator in the chemist’s office. “It’s not good for our office and, more importantly, it’s not good for agriculture when we’re blowing the roof off of our off-target movement complaints.”

A 2018 University of Missouri report concluded that 4.7 million acres of U.S. crops had potential dicamba damage in 2017 and 2018 combined.

Red Gold’s Smith thinks the problem is far worse than the number of complaints indicate.

“For every case they get, there are 10 more that don’t get reported. Farmers don’t necessarily like to report their neighbors,” Smith said. “There were close to 2,000 cases [in Indiana] last year alone.”

Bill Johnson, a Purdue University botany and plant pathology professor, called the dicamba debate “the most polarizing issue I’ve dealt with in 25 years as a weed scientist.

“This has created a lot of conflicts here in Indiana and throughout the Midwest,” he said. “In some cases, it’s causing neighbors to become mortal enemies.” 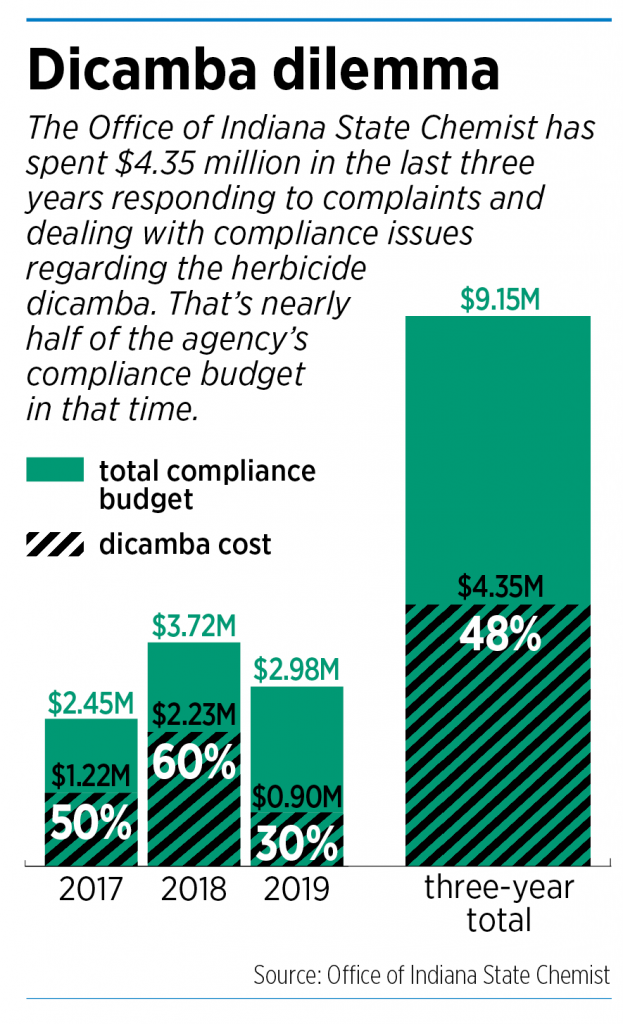 So how did we get here?

Glyphosate, the herbicide most commonly known by the brand name Roundup, has been the preferred weed killer for crops and residential yards for more than three decades. It has been quite effective on a broad range of weeds and it isn’t particularly volatile, which essentially means the spray and droplets aren’t prone to turn into gas, which could then fly away on the wind.

Over the years, seed manufacturers have developed Roundup-resistant seeds for many crops—corn, cotton, soybeans and hay, to name a few. Glyphosate’s use has become so widespread that, even if Roundup did drift, neighbors likely also had Roundup-resistant crops in their fields.

But weeds eventually mutate into strains that can survive the herbicide as well as the crops do. So-called “super weeds” have begun to plague Roundup-treated fields, and farmers, in recent years.

“We relied on one technology for so long, and it was used so widely, it was bound to cause some issues,” Scott said. “Because it was so easy to use, Roundup was more broadly used than anything else ever has been, and that compounded the problem.”

When herbicide makers, including Monsanto/Bayer and BASF, began looking for alternatives, they reached back to dicamba, which surfaced in 1967 but was abandoned by farmers in the 1970s and 1980s because it was too volatile and potent.

“It takes a minute amount of dicamba to have a horrific effect on vegetation,” Purdue’s Johnson said. “There are a lot of plants that are really sensitive to dicamba. I mean really sensitive, including red bud trees, oak and white oak trees, Cyprus trees, grapes, tomatoes, and of course non-dicamba-resistant crops like soybeans.

“And on the plants that are not resistant, it only takes a couple of ounces for dicamba to have an impact,” he added. “That compares to a couple gallons of Roundup to have that kind of negative impact.”

In 2017, strains of dicamba-resistant soybeans hit the market. When farmers started using the herbicide next to fields filled with non-dicamba-resistant crops and trees, the troubles began.

Because soybeans grow more slowly than corn, their herbicides are typically applied a month or so later—in June—than on corn and other crops.

“With beans, the dicamba is going down when other plants are totally leafed out,” Johnson said. “That means maximum damage can be done to unintended targets.”

So soybean country—which includes the Midwest and upper Midwest and extends through Kentucky, Tennessee, Arkansas, Mississippi and Louisiana—has been hard hit. And Indiana is in the heart of the impacted area. In 2019, Indiana had the third-highest number of complaints about off-target dicamba use, behind only Illinois and Arkansas.

Bayer and BASF in 2017 started marketing a formula of dicamba with reduced volatility that officials from the companies said was an improvement over older formulas.

But some Midwestern farmers say more work needs to be done.

“The new dicamba does have lower volatility, but that doesn’t mean no volatility,” Johnson said.

“Not all dicambas are created equally,” Bayer’s Zenteno said. “Our VaporGrip technology provides a 90% reduction in volatility” over an older formula without VaporGrip. 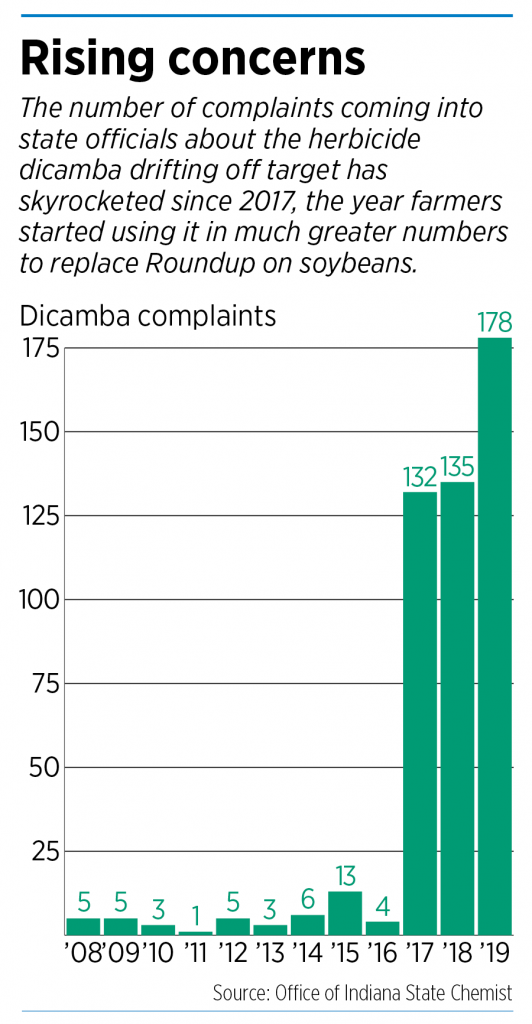 Work continues to produce an even less-volatile version of dicamba, but Johnson said the fear is that it will be less effective on weeds and too expensive for growers.

Several states jumped into action following the 2017 growing season, restricting the time dicamba could be sprayed. Arkansas banned it entirely.

Last November, the Indiana state chemist announced a label restriction for dicamba use that tells growers not to apply it during the 2020 growing season after June 20.

After the 2018 growing season, the Indiana Pesticide Review Board recommended the state chemist’s office consider quarter- to half-mile setbacks when applying dicamba near sensitive crops and residential plants. Similar restrictions were imposed in other states during the 2018 application season with some success, the review board noted. After consultation with local ag leaders, however, state officials decided not to adopt that restriction.

The U.S. Department of Agriculture recommends using a vegetation buffer composed of several rows of various plants and trees with fine, needle-like leaves at least twice as tall as the crop. The USDA recommends the buffer be about 20 feet wide in most cases.

Zenteno acknowledged that “dicamba is different than Roundup” and that “following guidelines [when using dicamba] is of utmost importance.”

Larry Steckel, an extension weed specialist at the University of Tennessee, said following the dicamba labels is “a Herculean task.”

“It looks good on paper, but when a farmer or applicator is trying to actually execute that over thousands of acres covering several counties, it’s almost impossible,” he said.

Like any new technology, Zenteno said, education with dicamba is key.

Bayer has been a leader in that area, she said. “You must be a certified applicator to use dicamba. You have to take a course to apply dicamba. More than 80,000 people were trained last year.”

Federal regulations for dicamba made by Bayer, BASF, DuPont and Syngenta require anyone applying the chemical to first complete dicamba-specific training.

Bayer and BASF are likely to be tied up in court for years with the hundreds of lawsuits brought by famers who say they’ve been financially hurt by dicamba drifting onto their crops.

Don Downing, a lead attorney for farmers in a class action lawsuit filed against Bayer and BASF in 2018, goes so far as to claim the makers of dicamba are creating a monopoly.

They’re “commercializing a product that literally destroys its competition,” he said in a court filing. “We believe that’s a violation of the federal antitrust laws.”•