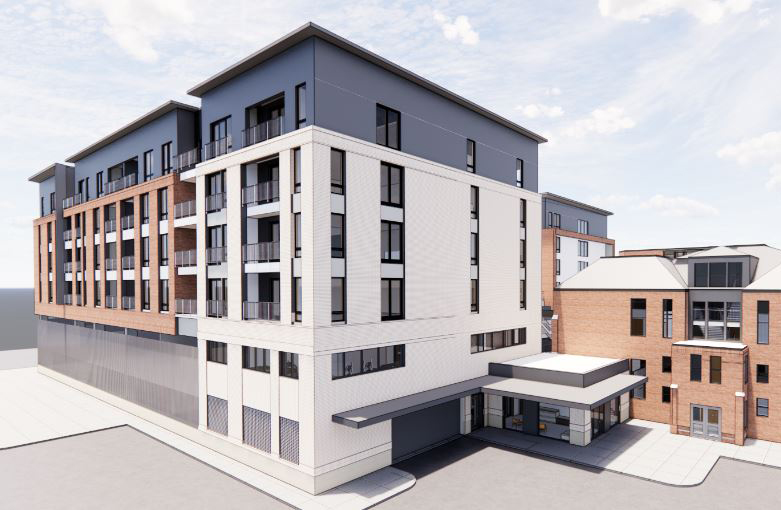 The Leo at LaGrotte Square would incorporate the former Indianapolis Public Schools School No. 7 building (at right) at 748 E. Bates St. (Rendering courtesy of Holladay Properties)

Holladay Properties plans to develop a 138-unit apartment project adjacent to its downtown Indianapolis offices in the Fletcher Place neighborhood.

The South Bend-based firm is expected to start construction this summer on The Leo at LaGrotte Square in the 200 block of South College Avenue, which will include new construction and the rehabilitation of the former Indianapolis Public Schools School 7 building at 748 E. Bates St.

The project, with an estimated development cost of $27 million, would include a six-story, 124-unit building on a lot north of Holladay’s local headquarters at the former Milano Inn restaurant.

The project would feature four stories of apartment units over a two-story parking podium with 134 parking spaces and a mix of studios and one- and two-bedroom units. Another 14 apartments with exposed brick and high ceilings would be incorporated into the former school building, which is currently being used as office space.

The buildings would be connected by a one-story building housing some of the amenity spaces. The business center and a library will be in the school building, with the fitness center incorporated into the new construction.

Holladay acquired the properties containing the Milano Inn and the former school building in 2017 and 2018 from the LaGrotte family, which ran the Italian restaurant for several decades.

Dan Phair, a partner and vice president of development for Holladay, said the firm considers the project “a perfect fit” for the southeast side of downtown.

He pointed to the project’s location within a few blocks of corporate campuses for Eli Lilly and Co., Indiana Farm Bureau, Anthem Inc. and Rolls-Royce—along with a variety of amenities like Bankers Life Fieldhouse and the Indianapolis Cultural Trail—as likely being key drivers for the the project when it comes time to lease units.

Those, Phair said, “along with the amazing views of the skyline, are just some of the benefits of the location of The Leo.”

The project is expected to go before the city’s Regional Center Hearing Examiner for design approvals on Feb. 25, after the group received a continuance from the previously scheduled Feb. 11 meeting.

Axis Architecture is the designer on the project.

The project is south of the $28 million Vue apartment project by Herman & Kittle Properties Inc., a 240-unit complex completed in early 2018, and the 31-unit Switchyard townhouse project from Onyx & East.