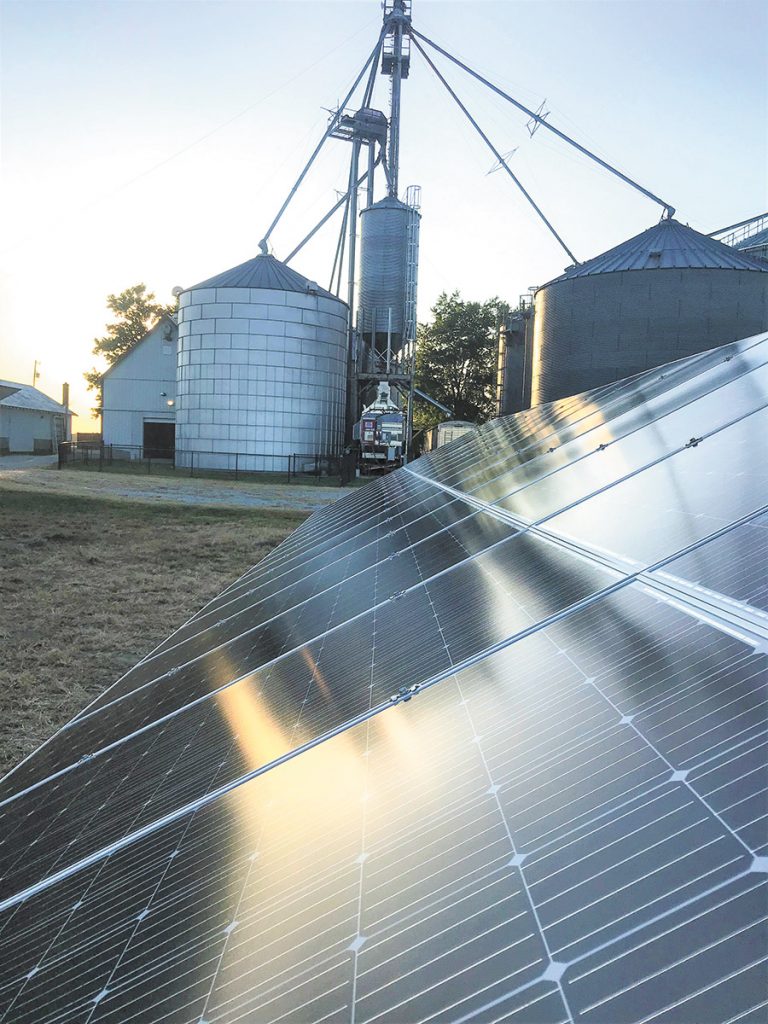 Jeremy Lipinski and his son launched Emergent Solar Energy in 2014 in the Purdue Research Park with the goal of helping local governments, schools, manufacturers and other companies make the switch to renewable energy.

And Emergent still serves all those types of customers. But it didn’t take long for agriculture to emerge as a key sector. Lipinski said that’s because solar is a good financial bet for farmers, but also because farmers are interested in the environment and sustainability.

Lipinski called farmers the “real stewards” of the land.

He pointed to a 155-kilowatt installation at a northern Indiana hog farm. Solar is now covering about 75% of the farm’s energy demand. That equates to a reduction of 3,500 tons of carbon emissions over 25 years.

The farmer, Kraig Resler, said the decision to install solar was an economic and environmental one.

“We are always discussing how to make our 7,000-pig operation more cost-efficient and environmentally friendly,” Resler said in a statement. “We are excited that our completed solar array will have a positive impact on the environment and save us money on electricity for years to come.”

IBJ talked with Lipinski about his company and why solar appeals to farmers.

Tell me how you got started.

For 16 years, I worked in commercial finance and I did financial modeling and placement of financing for commercial projects. Some of those were energy projects—and specifically solar. And in 2014, my son and I decided that there was an opportunity in Indiana because of Indiana’s energy policy.

I think at the time, there [were] 12 or 14 solar installers in the state of Indiana, and most of those focused on residential. And so in looking at the commercial side, I realized there was an underserved niche. And when we got started, working in the ag sector kind of happened organically because they were the ones that always contacted us. If I received 10 phone calls from people interested in solar, eight of them were farmers. That sector has been far and away the sector that has showed us the highest interest in adoption of solar. It’s not even close.

Why do you think that is?

The project returns for the farmer are quite impressive, and they are so because the farmer is not subject to what other commercial entities are subject to, as far as their electric utility rate tariff. Generally speaking, a large manufacturing plant or a factory or a small manufacturer even, they are subject to demand charges on the bill. [Demand charges are based on the highest amount of power a customer uses in a specific time period.]

You have charges based on demand and you’ll have kilowatt-hour charges. Demand charges are next to impossible to mitigate with solar.

A good candidate for solar is a customer with a meter that has only kilowatt-hour charges, and they are generally single-phase meters, single-phase electrics. They are excellent candidates because you can offset all of their energy consumption with solar. And if they’re tied into the utility through a net-metering agreement, then they get credits for anything that they push during the day for consumption at nighttime. So the project economics for on-farm solar seem better than for larger consumers that have different rate billing tariffs.

There is a project size that we really want to focus on, that’s kind of a standard for most grain-drying and what I call CAFOs, which you would know as a hog barn. That size is about 100 to 300 kilowatts, in that range. Now 100 kilowatts, if you compare that to the average home solar, it would be 10-12 times larger than the average home system. But if you compare that to a large factory or a school, something like that, then it would be probably 10 times less. About 100 to 300 kilowatts is what most hog barns, decent-size grain-drying operations are in the ag sector.

How long does it take that 100- to 300-kilowatt customer to break even on the investment?

That’s a great question. We had a big project, it’s 124 kilowatts. … This farmer has a hog operation and a very large grain storage operation. So he has 90% of his energy load with solar. And his project economics are incredible.

His internal rate of return for the life of the project is 14.5%. His 30-year return on investment was 183%. His payback period is 5.4 years. We get there through different means. You have the investment tax credit, which is now 26% of your project in a dollar-per-dollar federal tax rate. It’s stepping down. It’s going to be down to 10% here in two years. Then you have bonus depreciation, which, with the change in the tax law, you have 100% depreciation. … Then you have for farms specifically, the USDA [Rural Energy for America Program] grant, which is an awesome program for any entity, farm or otherwise, that’s in a qualifying rural area. … We’ve had great success in that. Now, when you add all that together, you’re looking at an offset 60% to 70% of the total project installed cost. Those numbers make it really attractive.

For most farmers, is this a bottom-line decision? Or are some of them interested in the environmental benefits?

I focus mainly on the financial aspect or the project economics because that’s a universal interest. I think that appeals to everyone.

But I think the majority of farmers are definitely interested in what I would call the intrinsic benefits of solar. And one of those, besides the environmental benefits, would be independence. And I think that farmers definitely have an independent spirit; they’re entrepreneurs. And they want to be independent of any other entity.

You called it environmental benefits. I would kind of classify it as stewardship. Farmers are kind of the real stewards. And I’m not a climate scientist, but I can tell you that clean energy from solar is much better. And I think the environmental impacts of burning fossil fuels are a concern to farmers.

I think farms have gotten a bad rap, really, as far as being polluters. I feel like that’s absolutely untrue in regards to their approach to how they manage their farms.

So [farmers] like the publicity, the positive publicity, of going solar. When I put up solar for a hog barn, Purdue Research Group puts out a press release on my behalf for the farm. That’s shining a positive light on how beneficial it can be and what the potential is. And that’s good news for the farms. I think that it’s easy to paint them with a broad brush and say, “Oh, it’s a factory farm and they hate the environment. They don’t care about animals.” I found the opposite of that’s true because it not only affects their reputation, it affects their bottom line.

What could Indiana be doing to encourage more companies or farmers or anybody to adopt renewable energy?

Indiana’s energy policy towards renewables is very low-scoring, if you look at it from a national average. We do not offer any state incentives for solar. We don’t really have a [state renewable tax credit] market that we can sell in Indiana. Some states … actually have a market where you can exchange renewable energy credits. Indiana does not have that. We have no state incentives.

But I think the biggest thing is, Indiana does not allow for third-party ownership. And what that means is, when you see a school or, let’s say, a nonprofit entity or a municipal entity, a university, a college, a town, they have to buy the [solar project].

That’s how Ohio does it. That’s how Illinois does it. Indiana doesn’t allow that. So every project that I build, whatever entity contracts with me, actually owns it. So if it’s a not-for-profit—like a town or a school or a church—they receive zero tax benefits. None. They can’t get the [tax credits] or the depreciation benefits. So that’s half the cost of the project [they have to pay that a company would not].

Do you expect more farms and companies to adopt renewable energy?

I think so. I think that you have two things happening. You have the cost of electricity continuing to escalate—there’s no doubt about that. Then, you couple that with the cost of solar implementation or installation that continues to drop every year. There will be a tipping point.•