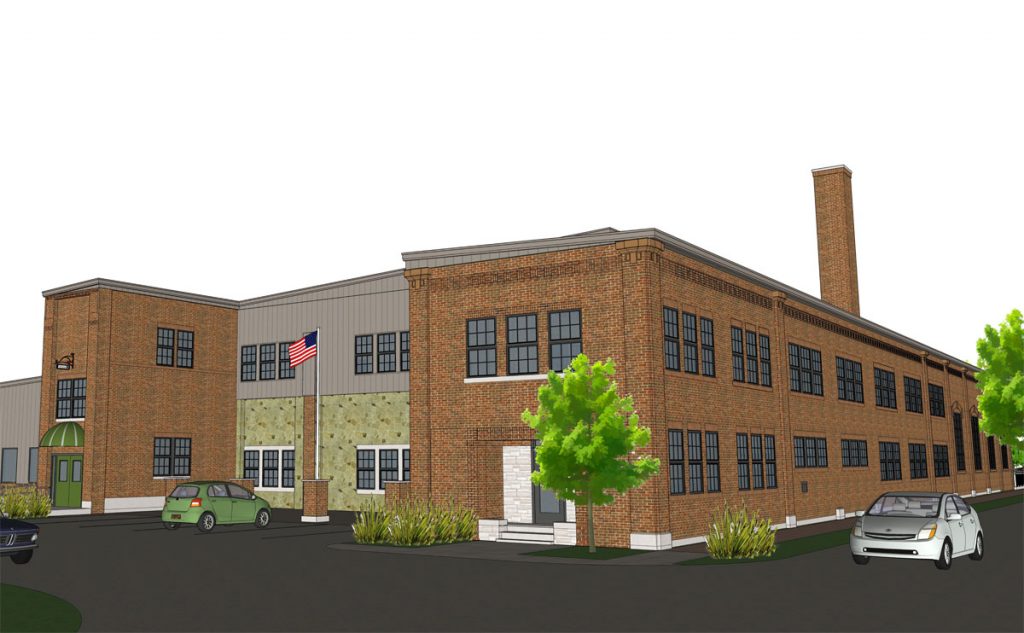 A rendering of the project at 1203 E. Saint Clair St. (Image courtesy of the city of Indianapolis)

A charter school operator plans to spend about $10 million to relocate one of its elementary schools to a former warehouse on the outskirts of downtown Indianapolis.

Paramount Schools of Excellence, which has three schools dispersed throughout the city’s east side, will relocate its Community Heights operations to 1203 E. Saint Clair St., just west of Arsenal Technical High School.

The charter system bought the 55,000-square-foot building Dec. 23 for nearly $3.2 million, amid continued demand for its kindergarten through fourth grade programming. Paramount bought the building, which sits on a three-acre lot north and east of Pogue’s Run, through real estate subsidiary RSPS Realty LLC.

The warehouse building, constructed in 1917, was previously home to the now-defunct Beacon Printing & Graphics Inc. The property also has served as a car yard, storage area and repair shop for Indianapolis Railways, a trolley company.

“It’s a super-attractive site for us,” said Tommy Reddicks, executive director for Paramount Schools. “It gives us a lot of room, and a lot of opportunity.”

He said Paramount will spend nearly $7 million to renovate the building into a 20-classroom school that’s expected to be operational by July 1. Work began on the building Dec. 26, he said.

Paramount expects about 275 students will be enrolled in the next school year, including most of the 130 students from the Community Heights school, 1525 N. Ritter Ave. The school will have about 50 employees during peak operation times.

In November, Paramount was granted a variance of use by the Indianapolis Historic Preservation Commission, allowing for a school on industrial-zoned land. The IHPC has jurisdiction because of the site’s location in the historic Cottage Home neighborhood.

The group still must receive a certificate of appropriateness for its redevelopment plans, a request for which is expected to be heard by the commission in March, Reddicks said. Contractors are allowed to perform demolition work on the site—but not build-out—before the certificate is granted.

The site plan calls for a playground, vegetable garden, goat run and barn, and beehives. The plan also shows leasable space of 11,000 square feet on the north side of the building, although Reddicks said the charter is still weighing its options for the space.

“We’d love to find a partner related to education to utilize that space, but we haven’t really finalized our plans,” he said. “If we found that perfect kindred spirit that fit with our mission, I think we would be really open to that.”

Reddicks said the charter needed to find a new location because the Community Heights location is only suitable for about 100 students, and the group plans to extend its reach in the next few years.

“They’re at full stress there, and there’s no place to grow,” he said.

Paramount has just under 1,100 students across its three schools, ranging in grade level from kindergarten to eighth grade. Its other two schools are located at 3020 Nowland Avenue in Brookside and 1849 Pleasant Run Pkwy S. Dr. in Englewood.

Paramount spent about seven months evaluating different sites throughout Marion County, considering locations as far north as Lawrence Township and as far south as I-465, he said. But the group opted to remodel an existing building—rather than build new—to cut down on its construction costs.

He said the charter group also explored whether it could acquire a vacant Indianapolis Public Schools facility using the state’s $1 charter law, but no such sites were available that fit the school’s needs.

Keystone Corp. is the lead contractor on the project, and Rottman Collier Architects is the designer. Both firms are based in Indianapolis.