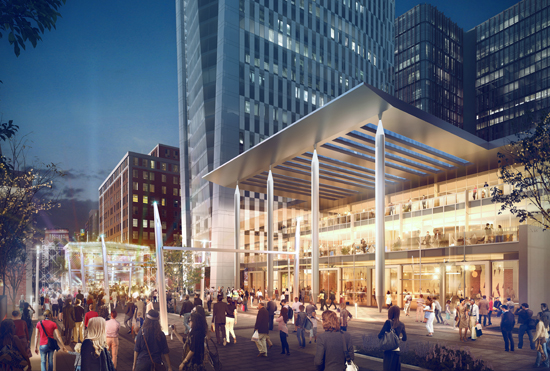 The Metropolitan Development Commission on Wednesday unanimously approved $25 million in additional funding for the convention center expansion and hotel project at Pan Am Plaza in downtown Indianapolis.

The approval allocates $25 million from the city’s downtown tax-increment financing district to pay for the acquisition of the basement level of the expansion project from developer Kite Realty Group Trust, which is building both the Indiana Convention Center addition and an 800-room hotel through a partnership with the city and the Capital Improvement Board, which operates the convention center.

IBJ first reported on the MDC’s plan to consider additional funding for the project on Tuesday.

The basement level includes a junior ballroom and several meeting rooms that are part of the so-called podium portion of the project, which includes a new 50,000-square-foot ballroom—the largest in the state—as well as tens of thousands of square feet of meeting rooms and public space, and a new skybridge connecting the project to the rest of the convention center.

It will be the fifth addition to the convention center, which opened in 1972 with three exhibit halls, a single ballroom and three meeting rooms.

The podium is being developed by Kite alongside the 800-room Signia by Hilton hotel (albeit through separate funding channels, as the city has resisted direct contributions to the hotel portion of the project), with a target opening of early 2026.

The acquisition of the basement gives the city a larger ownership stake in the project, the first phase for which is now expected to cost about $440 million amid inflation, interest rate spikes and increased construction costs. A second 600-room hotel, planned for no earlier than 2027, is expected to cost $125 million.

Scarlett Andrews, deputy mayor for economic development for the city of Indianapolis, told IBJ that taking over the basement portion” makes the project more viable from a financing perspective” because the city will theoretically have more control over the physical space.

“We’ve increased our ownership interest, and in concert with that we’ve invested more,” she said of the decision to buy out the basement level. “It was an analysis of what cost increases were associated with the podium … so we are getting proportionally more ownership stake in this—it is a public facility project.”

Even so, the expansion is expected to be co-managed by local tourism officials and Hilton, in a first-of-its-kind deal for the city. Through a deal reached in 2020, Visit Indy will book space in the addition from 30 months out and longer, while Hilton will be able to rent out the space for the earlier period.

She said use of the downtown TIF funding—which essentially is cash that the city’s Department of Metropolitan Development can deploy for key projects—allows the city to take on the additional space without incurring more debt.

“Being able to own in perpetuity not just the [larger] ballroom, but that junior ballroom space and the ancillary meeting spaces only further secures our ability to leverage this as a generational opportunity for our conventions and events industry,” she said. “It makes it even more secure for us as we look into the future and how we can utilize this space.”

The MDC’s vote Wednesday also included an increase to the city’s interest limits on bonds for the project to 8%, to allow for more flexibility given the increase in rates. The approval of the resolution followed a very brief public discussion, in which commission members lauded the city’s continued efforts on the project.

The City-County Council on Monday passed a similar measure, ahead of expected efforts in the new year for the city to sell $125 million in bonds to support the convention center expansion project. The city in 2020 approved $155 million in bonds, but that figure includes property acquisition, legal fees and other costs.

In written remarks, Andy Mallon, executive director of the Capital Improvement Board, said he was appreciative of the MDC’s approval of the additional funding.

“Today’s vote on the amended resolution for the phase six expansion is yet another indication of the mayor’s and the city’s commitment to growing the Indiana Convention Center’s ability to host citywide conventions and world-class sporting events,” he said. “Indianapolis has consistently shown its willingness to invest in the future of our downtown area and the county as a whole, even when economic conditions prevent other cities from moving forward.”