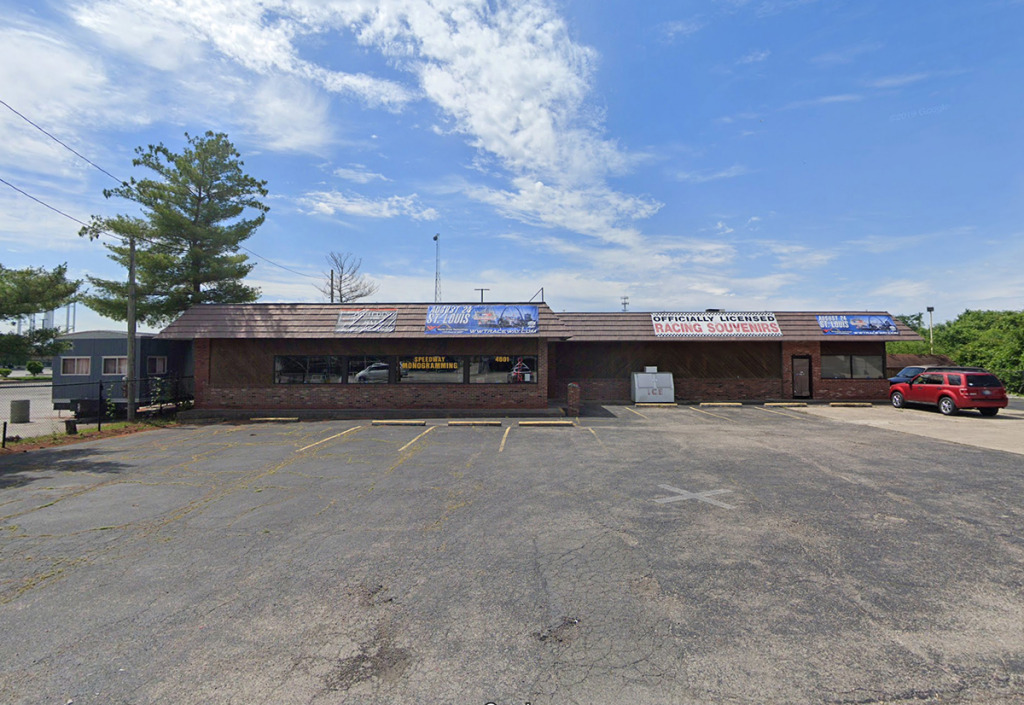 Penske Entertainment Corp. has acquired a small but high-profile property across from the Indianapolis Motor Speedway’s main entrance on 16th Street that will give track officials a large swath of contiguous land as they rethink what the speedway’s “front door” looks like.

The vast majority of land on the south side of 16th Street across from the 113-year-old track is owned by Penske Entertainment and largely is used for parking. The most obvious exception has been the 0.38-acre parcel that contains the single-story business Speedway Monogramming, directly across from the Tunnel 2 entrance at 4601 W. 16th St.

The parcel is bracketed to the west, south and east by property owned by Penske Entertainment, including the corporate offices of IMS Productions at 4555 W. 16th St. and the IndyCar Series at 4551 W. 16th St. Both are set back from the street and fronted by large parking lots.

In late April, a subsidiary of Penske Entertainment bought the Speedway Monogramming property for $850,000, according to state records for real estate transactions.

Indianapolis Motor Speedway President Doug Boles revealed the purchase in an interview last week for the IBJ Podcast. The context was a discussion of how Penske Entertainment plans to begin considering uses for the hundreds of acres of land it owns outside of the track proper.

“That [acquisition of Speedway Monogramming] begins to give us more property to start thinking about what the front door looks like,” Boles said.

“We were there for 38 years,” Susan told IBJ. The shop offered custom embroidery and made shirts for race teams and corporate customers. It also sold Simpson and Bell racing gear and souvenirs.

Jim, 82, and Susan, 70, decided “it was time to slow down a little” and sell the parcel, Susan said. She may continue to do embroidery for the shop’s longtime customers.

“We have made a lot of friends over the years and met wonderful people, and I feel fortunate to have had such a nice place and such a window to the world,” Susan said. “We have met people from all over the world. We’ve seen families grow up. And we’ve seen their grandkids.”

Susan confirmed that the parcel had been sold in April but declined to name the buyer or confirm the purchase price listed in state records.

No specific plans have been made regarding future uses of the property, according to Amanda Stanley, director of communications for Indianapolis Motor Speedway. “[But] the acquisition of the property does allow Penske Entertainment to think about what the ‘front door’ of IMS looks like,” Stanley said.

The purchase included the 300-acre racing facility, as well as about 650 adjacent acres—a significant percentage of which is used for parking.

Boles said in his interview for the IBJ Podcast that any discussions about how to potentially redevelop land outside the track were on hold at least until after the current events season.

“That’s where Roger’s focus right now really is—get through a proper season where we actually have a full house and actually do the things Roger thought he was going to do when he bought the Speedway, and then we can start thinking about those next steps,” Boles said.

“We’ve got a lot of property around here—a thousand acres,” he said. “What are we doing with that property? How do we work with the town and the city to continue to close the gap between 16 Tech [Innovation District] and the west side to really help the neighborhoods around us? Roger is really committed to trying to find a way to just continue to bolster these neighborhoods, so I think that’s where we’ll really focus after this year.”